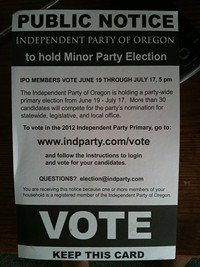 1
And what about the charitable contributions, Paul? How much did YOU give to charity last year? How much did YOU volunteer? Mitt Romney released his taxes and guess what? NOTHING BAD HAPPENED. Nothing illegal. Nothing out of the ordinary for a wealthy man. What he did do is give probably millions more in charity than you did, you gutless hack.

You think liberals don't save on their taxes in every way they can? Or does every liberal out there just allow themselves to be taxed at the highest rates all across the board?

When the government wastes so much fucking money it's no wonder people want to pay the least amount as possible. This article represents just that. Mitt Romney likes to save on taxes. Oh lawdy...help us all! The bigger the government, the bigger the waste. It's not rocket science. You have many years of examples throughout history. Liberal ideals don't work so they resort to cowardly attacks.

Desperation is a motherfucker. I won't vote for it.
stjohnsrules on September 21, 2012 at 3:16 PM Report this
2
I'm okay with paying 30% in taxes, I think it funds worthwhile things. I do not know why rich people with assets instead of income are allowed to opt out of paying a similar share. Having been on the bottom, I see it as a privilege to have enough that I can fund my fellow citizens.

4
Yay, king doofus is back.
bookfiend on September 21, 2012 at 6:05 PM Report this
5
Romney’s tax rate is still LESS THAN HALF of the AVERAGE Middle Class American! This is the epitome of GREED. There's no doubt a Romney administration would favor the rich and increase the income gap in our country? Mitt is a pariah in Mormon Clothing and will stop at nothing to expand tax cuts for the 1% of the wealthiest Americans. He’s out to gut the Middle Class for every red cent he can get. Will his sacred Mormon underwear grant him the protection and money to buy this election? See for yourself as Mitt dons his tighty-whities sent down from the Good Lord Himself at http://dregstudiosart.blogspot.com/2012/05…
Brandt Hardin on September 21, 2012 at 6:49 PM Report this
6
"I don't pay more than are legally due and frankly if I had paid more than are legally due, I don't think I'd be qualified to become president, I'd think people would want me to follow the law and pay only what the tax code requires." - Mitt in July

"According to an announcement by the campaign Friday, the Romneys could have had a lower tax rate than 14.1% in 2011 if they had claimed more of their charitable deductions–an amount that equaled 30% of their income. Romney made $13.7 million mostly off of investment income last year.

However, the Romneys only claimed 16% in charitable deductions, thus keeping their income tax rate higher, in order "to conform" to Romney's previous comments about his tax rate, the statement read Friday." - CNN this weekend
GeezRilly? on September 24, 2012 at 2:46 PM Report this