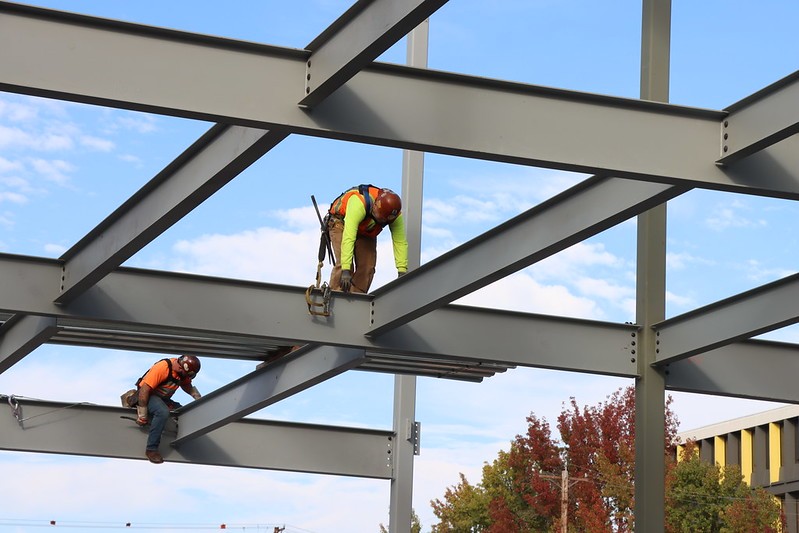 PPS adopted the Climate Crisis Response Policy (CCRP) in March 2022, acknowledging climate change as a crisis and creating a path for how the district is going to respond to that crisis. The policy—which was in development by volunteers and PPS leaders for three years—guides the district to limit its carbon emissions, transition its vehicle fleet to low-carbon or electric, support students and staff during climate emergencies like wildfires or floods, and develop curriculum that teaches students about the root causes of climate change. The climate policy also commits the district to no longer using fossil fuel infrastructure in new buildings, as well as phasing out gas-fired equipment—like heating and cooling infrastructure—in all existing PPS buildings by 2050.

The CCRP was celebrated as one of the most aggressive climate policies for a school district in the nation when it was unanimously adopted by the school board earlier this year. However, the policy does not include consequences for PPS if the school district does not follow the policy or meet its goals, meaning the policy only works if  PPS leaders choose to uphold it.

So, when members of the committee who developed the climate plan learned that the ongoing remodel of Benson Polytechnic High School in inner NE Portland includes a fossil fuel-powered heating system, their faith in PPS’s follow-through plummeted.

“The bottom line for me is that PPS is full of shit,” said Mike Rosen, a former PPS school board member and current environmental advocate who helped develop the climate policy.

Rosen sees the inclusion of gas-fired infrastructure in the project as both in conflict with the climate policy and a burden to taxpayers. PPS is paying for the Benson remodel with voter-approved bonds from 2017 and 2020 and will inevitably have to replace the gas-fired heating system with an electric system by 2050, likely also at taxpayers' expense. PPS has yet to determine how it’s going to pay to switch all of its buildings to all-electric by 2050.

PPS staff attribute the conflict to the two projects’ varying timelines—Benson’s remodel design work began in January 2019, two years before the climate policy was adopted, meaning that the restriction on fossil-fuel infrastructure didn’t apply at the time. Rosen disagrees, arguing that high-level decision makers for the Benson design were aware that the climate policy would require PPS to stop using fossil fuel infrastructure before the policy was adopted by the board.

Rosen, the other members of PPS’s Climate Justice Steering Committee, and 15 environmental organizations sent a letter to the PPS school board members on October 27, urging them to further study the feasibility of pivoting the Benson remodel to an all-electric building at this point in construction. Benson’s construction is approximately 40 percent complete as of the end of September.

“Last spring, we applauded PPS’s leadership in adopting this progressive policy,” the letter reads. “However, at Benson it appears that a lack of District coordination has resulted in PPS-employed contractors negating this critical policy.”

The letter calls on PPS to stop fossil fuel-related work on the Benson remodel, complete a cost-benefit analysis of gas vs. electric infrastructure for the project, conduct an environmental impact analysis for the project, and hold a public forum “to field concerns of students and community members and to help build trust that the policy will be followed on future renovation & rebuild projects.”

School board member Julia Brim-Edwards, who helped create the climate policy, raised questions about the Benson remodel in a PPS facilities meeting in late September. Brim-Edwards noted that the 2050 deadline for phasing out fossil fuel infrastructure was chosen because it was assumed that all PPS building remodels, or “modernizations,” that the district has planned through voter-approved bonds would be designed without fossil fuels.

“In the policy committee, we gave the district until 2050 to phase out existing fossil fuel infrastructure, but I was really thinking that would be about the time when we worked our way through all of the modernization [projects] and improved things, not that we would be giving a new building until 2050 to remove [gas-fired equipment],” Brim-Edwards said at the facilities meeting. “I don’t know how the miscommunication happened, but I never imagined that Benson wasn’t new construction and that it wasn’t going to comply [with the climate policy].”

Brim-Edwards also asked PPS staff to share the cost-benefit analysis it had performed when it was deciding whether or not to make Benson a fully-electric school or not; PPS cited the analysis in a memo explaining its decision for the Benson design. However, there is no singular document that details a cost-benefit analysis of the Benson remodel, rather the determination that switching Benson High School to an all-electric building would be too expensive came from “a discussion” among district staff and project engineers, according to PPS staff at the September facilities meeting.

District staff estimate that pivoting to an all-electric design at this time would cost an additional $6 million to $8 million and delay the project by two years, during which Benson students would remain at the former Marshall High School campus in SE Portland’s Lents neighborhood. According to Aaron Presberg, manager of energy and sustainability for PPS facilities, the construction team is determining whether Benson can be made “electric ready”—fitted with some of the infrastructure needed to eventually make the building all-electric—but it depends on if it can exist within the current budget.

“These are very large, complicated projects that are in process for several years,” Presberg said. “I understand the perception of what's going on, but this is something that's been in process for years and it's not something that we're doing intentionally. It's more of a timeline issue than anything else.”

School board members Gary Hollands, Amy Kohnstamm, and Herman Greene indicated in September that they would not be interested in recommending the district pivot Benson to an all-electric building at this time due to the delay in getting Benson students back to their usual campus.

PPS does not have an estimate for how much it will cost to remove or phase out the fossil fuel infrastructure by the 2050 deadline. Rosen believes that given inflation, rising material costs, and new research about methane gas leakage, it would be less expensive and safer in the long run to build Benson all-electric now instead of waiting.

“They're kicking the can down the road at a significant cost to taxpayers,” Rosen said, “which I think they take for granted.”