This event was canceled.

As if that onstage collab between big Nas and Lil NasX at the Grammys wasn’t enough, Nas’ prolific debut album Illmatic is 25 years old this year, indicating that we are all getting very, very elderly. For this special anniversary show, the legendary New York MC teams up with the Oregon Symphony to perform tracks like “Halftime” and “The World Is Yours” from his critically acclaimed 1994 masterpiece. The symphonic performance gives us one last opportunity to judge with our own naked ears and determine if the album was really worth that controversial five-mic rating from The Source. 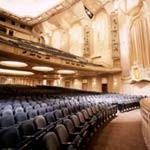