1
Ian-Is one of the actresses you mentioned the blonde with the top-knot hairdo from The Road Warrior? The one making eyes at Bruce Spence? Because I have always had a thing for her.
Barf! on April 17, 2013 at 3:15 PM · Report this 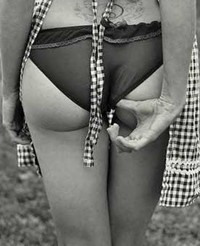 2
Third row seating always leads to hot, wet mouth action, as long as you are a believer.
Stephonknee Wells Kunz on April 17, 2013 at 4:28 PM · Report this
3
Truly awesome, Ian. Thanks.
Jessica1911 on April 17, 2013 at 4:42 PM · Report this
4
I loled. Shut up Karmel. Hate you keep going. Portlandia Statue indeed. Clouds. Yes.
I'mrightyerwrong on April 17, 2013 at 6:46 PM · Report this
5
I might have missed the original article if you hadn't translated here it for us. Fortunately I typed away and found it- Amazing! And the website it came from? Well let me just say that all of my insane, truly monstrous ideas and feelings about women and the world aren't just all in my head- No, actually it turns out, there's others out there who ALSO fervently guard their masculinity with Gollum-like ferocity!!! Well, I'd add more, but I've got to get my swole on before I head out tonight in search of some 'bangs.
-Lates
CK on April 17, 2013 at 8:51 PM · Report this
6
I am offended when homeless exist near me when I lived in Portland, there is really a sheer abundance. It is really sad and its a shame that this city has a problem like this. It detracts from the quality and gives a bad impression to visitors. My now current wife was visiting Portland with me a few years back, she is from the south and was shocked with how many people sleep in doorways in businesses. I don't think its something that can be taken sarcastically and to blame others for being offended by their inability to rise to the level of society so many share is offensive to me. I know that the blogger that wrote the original article may not be solid in his opinions but an article like this is much more childish.
Kyle Ruble on April 18, 2013 at 10:22 AM · Report this
7
"I am offended when homeless exist near me" is maybe the worst phrase that's ever been written in Blogtown comment history—and you people spew some GARBAGE.
Alison Hallett on April 18, 2013 at 11:05 AM · Report this
8
Yup, hyperfocus on the first sentence. Just the first one.
Kyle Ruble on April 18, 2013 at 11:59 AM · Report this
9
@iceprez, indeed it is. @Allison, did you read Kyle's entire comment? I don't have a problem with the piece as I understand it is intended humerously
on April 18, 2013 at 12:30 PM · Report this
10
@Kyle Ruble - I look forward to your now current wife someday soon being your now ex-wife.
Ian Karmel on April 18, 2013 at 12:46 PM · Report this
11
@showstopper... I did! i got lost in a sea of double-negatives so I may have misunderstood this part, if anyone wants to diagram this for me:

"and to blame others for being offended by their inability to rise to the level of society so many share is offensive to me."

21
Matt Forney's problems with Portland women (who are just fuckin' gorgeous and such beautiful people inside and out) are rooted in that he has a very small penis. VERY SMALL.

On the homelessness issue: i've been there, done that. Squatted a house in SE portland, slept in doorways and parks, and spent a good majority of that time being homeless WORKING a job and traveling the State of Oregon.
Fuck off if you get offended by seeing people existing that don't have it as grand as you do. Some of us do it by choice, most of us had no real alternatives or options.
@Kyle Ruble- Do it better, give that "bum" who is offending your grandiose sensibility a shower, clean clothes and a nice pair of wool socks + $10 for a beer and smokes.
Dan America on April 19, 2013 at 5:22 PM · Report this
22
what does the weather have to do with getting beef curtain? or bums for that matter. are they supposed to correlate? I have found that Portland women are the easiest out of anywhere I've ever lived. and I have lived in sunnier climes, where the indigent and feeble of mind are caged and exported like so many Zimbabwean baby elephants. the naturally beautiful may be an uncommon sight where you tend to scurry, but with some common sense and an affection for stereotypes one will find flocks of fuckables (in both physique and eagerness). I am no Adonis but my one-eyed chinaman wants for nothing here. I can't refute the other points as they are simply
undeniable endemic flaws in our Portland women.. and men.
lessunlearned on April 22, 2013 at 2:11 AM · Report this
23
I moved from Cali years ago here and I still can't relate to some of the Portland wierd'ness's's's's'..... When the ground gets wet, or the sun shines, Portlandars SLOW down on the freeway. When hwy 205 goes a LITTLE zig zag like the "curves" right around johnson creek and foster, people slow down to 30 mph as if they cannot handle either the change in route or the slight wheel turning. Also, when there is a law stating no-one can use phones while driving, why are all the lawyers and such still doing it? (everyone still does it) And to spend money on bike paths instead of potholes? who pays for the roads? who pays for the bike paths. (same people twice, bicyclist's once) When you take for instance, Burnside and make it illegal to park your car on the street during one way rush hour then do it the other direction later on.... for real??? I nearly wiped out my car when I arrived here! And I am a very cautious driver. Why not make the 4 lane road this... curb parking space, then a painted bike lane, then the traffic lane then the same on the other side. done deal, this way bike road hogs follow the lanes like I do. (nothing worse than someone who either drives or rides a bike and doesn't have lights on or uses thier turn signals and swerves all over the place cutting people off. What a@@holes! Also, if the cops want to enforce the "LAW", then they should read-up. Anyone who places a cover or covering to cover ANY part of the licence place must be cited. Have you even NOT seen a licence plate thats plastic and weathered so bad you can't read it? Also, the FU@KING window tinting! I remember in the 80's you got it tinted, you get a ticket. Today, the people have all the windows so black you can't see the a@@holes face who just drove 100 mph past you, but you caught up with him at the next light. I would hate this to happen... "Sorry Officer, I did not see the guy who shot and robbed the bank teller, since I could not see the person driving since his windows were too blackened" (grounds for case dismissal) As far as the "medical marijuana", my wife were for it until I hired a man and he used my business to make, sell and distribute his. He gave my customers discounts and pocketed falsified invoices. He to this day still believes that the medical marijuana card was his ticket to being a legalized drug dealer. After that, Sorry. Where are the lawyers and doctors with short hair and professional looking attempting to pass these laws? Why are they all hippies from the 70's pretending to be something they aren't. The women wear mu-mu's and have frizzed out grey hair.... hmm HIPPY.... the guys have long hair, also grey and drive a crappy car or used up 1970's toyota pick-up.. again.. HIPPY