A Brief and Completely True History of the Catholic Church

He used his position to threaten the most impoverished, superstitious,
uneducated people in the most overcrowded countries of the world with
eternal damnation for practicing birth control.

If I believed the human construct of hell, I would hope he's there now,
in a very crowded, disease infested slum, watching the millions of
unwanted children starve before him.

Good riddance.
ReligionSucks on June 24, 2010 at 6:03 PM · Report this
5
Despite its crimes, the Roman Church -- which is, clearly, the oldest whore-cum-procurer that's still working our streets -- bequeathed to us the idea of the University. Shame your author, little Lindy, didn't avail herself of that institution before taking on the Church. With enemies like her, who needs friends?
David van Dusen on June 24, 2010 at 6:17 PM · Report this 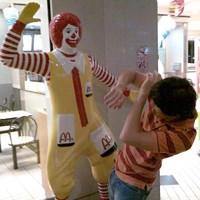 6
i already read this a couple weeks ago. lame
Carls on June 25, 2010 at 3:52 AM · Report this
7
it's a different publication. when you write something hilarious and it also happens to be hilariously true, why not post it to several forums and enlighten as many people as possible..
marybeth carter on June 25, 2010 at 3:13 PM · Report this
8
Blah,blah,blah blah.Dont let yourrrrr sonnnnn...go down on meeeeee.Get a rope.
Brad the quarterback on June 26, 2010 at 12:52 AM · Report this
9
Hey, speaking of worst poops ever, this feature was a doozy.
MucinexD on June 26, 2010 at 8:34 PM · Report this
10
I grabbed the Mercury to read this article. It sounded like it would be pretty interesting. Especially as I am what you would call a recovered Catholic turned atheist.

I can say that this article was total garbage. Did she spend more than five minutes working on this full page piece of crap. The writing was just plain dumb. How much do you pay Lindy West, hopefully not much more than part time Burger King. She needs to go back there and do a job that is closer to her capabilities. In a town with so many talented writers the Mercury could be so much better.
reader1 on June 27, 2010 at 4:09 PM · Report this
11
Lindy West, nice work. You story showed a certain Liz Lemonish temerity that registered just enough sophomoric presentation to truly reflect what the Catholic Church is all about. "You look like a goddamn warrior princess." True, indeed.
bryanwestby on July 1, 2010 at 9:42 PM · Report this