A Question of Dignity 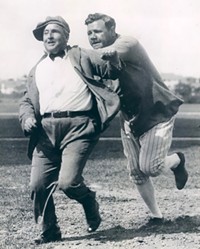 1
Let the UN secure at least one city in Syria for the refugees so that they don't have to lose everything and can stay home.
Persona Non Grata on January 13, 2016 at 11:13 AM · Report this
2
This is sad, and I am touched by your families story. When I moved here, I ask people raised here for generations about this very thing. Thanks for the truth.
seentomuch on January 13, 2016 at 3:53 PM · Report this
3
Yume means dream, right? I don't know whether to call you Yume-chan or Yume-san....

Kudo's for a very well-written article.

As a High School boy, I did a 'report' on the Japanese Internment during WW2, which included research at the UCLA library and scoring a film from that era from the local Veterans Hospital (somehow) that showed how eager the Japanese Americans were to sell their homes and businesses for pennies on the dollar to support our war cause.
2 friends and I actually went to Manzanar to see one of the places this travesty happened. I still have pieces of the ceramic plates that they ate from, thrown into a huge pile and broken up, as it was said no one would want to eat on these plates afterwords.
I have since gone to Tule Lake, where the 'bad boys' were interned.
So very sad to think of family's living behind barbed wire, making camouflage for the war effort, while their sons served in the highest decorated unit of the Army, the 442nd, with the highest casualty rate, to prove their loyalty. Talk about Irony.
There were no acts of espionage by the Japanese Americans, even in Hawaii, where the population was too large to intern -- but on the east coast where many acts of espionage occurred you did not see Italian or German Americans interned.
Again, talk about Irony....
And the Japanese Americans endured this whole travesty with such grace and dignity beyond words.
Surprisingly (?), a formal apology was issued under the Republican President Reagan, and a monetary attempt to make up for it.
Learning of this sad chapter of American History has affected me to this day.
However,
I still must wonder of the wisdom of taking in so many refugees from countries filled with strife that have been - for the most part - anti American.
When the Issei arrived, they were not coming from a country espousing hatred of all things American, right?
There is no easy solution to this, but it certainly is very important to look at the past to guide us in the future.
I thank you for your words.
frankieb on January 13, 2016 at 5:54 PM · Report this
4
I'm reading Jan Jarboe Russell's "The Train to Crystal City". It is well written and very touching. Your story is Aces also Y.D. Our country's history is chock full of people and accomplishments to be proud of and plenty to be ashamed of. The treatment of your grandparents and family was despicable. The land and property grab by our good ol patriotic home guard that never even got a whiff of enemy bombs or gunfire is so typical. Wave that flag and you can falsely justify thievery intimidation and cruelty. We were and still are very adept at this.
Medicated Marine on January 13, 2016 at 6:53 PM · Report this
7
In downtown Los Angeles in the Japantown area is the Japanese American Museum. We were there in 1996, so I don't know if this particular exhibit is still there. An actual barracks from Harts Mountain, Wyoming internment camp had been disassembled and then re built in a parking lot next to the museum. It was so old you were not allowed to enter it. They had therefore built an exact replica one could walk around in.
In high school like many Portland students I had a summer job @ Import Plaza. For about a month one of my duties was walk through the store before it opened with Bill Naito. He would point out this and that he wanted me to do. He was a great guy. Somewhat more approachable than Sam. I mean not to disparage his legacy but Bill and the Naito family were not interned. However nobody should be faced with the choice to either go to Minidoka, Idaho camp or re locate to Salt Lake City.
My wife of almost 40 years is Sansei, 3rd generation Japanese-American (I'm a white guy). We consider our two children yonsei (4th generation) like Yume the author. Both kids in high school took Japanese language. Although not proficient they know a lot more than their mother.
Over ten years ago at dinner the discussion turned to the topic of discrimination. Neither of the children were aware that any negative comments had been directed their way. And somewhat surprisingly neither had their mother and she is a Boomer. So in some pockets of the Portland area (Clackamas County) there was tolerance in the 1960s.
Her parents were both at Minidoka. Her father was born in Japan but came to USA as a child. Her mother was born in Astoria but in what was not that uncommon @ the time had gone to high school in Japan. Not long after she returned the war began and then internment. Welcome home grandma
Randy Hunt on January 15, 2016 at 3:38 PM · Report this
8
Randy Hunt, my husband is also sansei. My Mother in law was interned at Minidoka, her last name was Minami, now Sugai.
Teri Sugai on January 15, 2016 at 11:54 PM · Report this
9
The Japanese American Historical Plaza along the west bank of the Willamette in Portland features a memorial stone tribute to those who suffered.
"Using thirteen engraved stones of basalt and granite, the Japanese American Historical Plaza in Portland tells an important story of the Japanese in Oregon. Landscape architect Robert Murase created the theme and design of the plaza to tell the story of the hardships suffered by Japanese immigrants and the indignities imposed by the incarceration of persons of Japanese ancestry during World War II. The plaza shows how the rights of Japanese Americans on the West Coast were denied, and honors the bravery of those who served in the U.S. Armed Forces while their families were in the camps."
~ http://oregonencyclopedia.org/articles/jap…