First Cow Review: The Cow Is Beautiful, and Nothing Bad Happens to Her 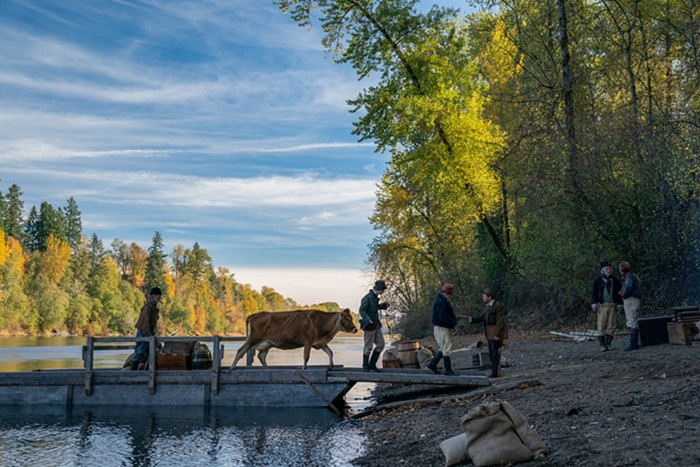 Okay, that’s pretty unlikely. But the idea occurs precisely because First Cow has such a radically hype-repelling air, reflected even in its simple title. It’ as if Reichardt—who directed and co-wrote the film with her longtime collaborator, Portland writer Jon Raymond—is so confident in this story that she’s all, What’s so important about this cow? You’ll see.

Reichardt is a household name for moviegoers who worship thoughtful, gritty films about the American frontier. Though only her 2010 drama Meek’s Cutoff was actually set in a period we’d think of as frontier times, many of Reichardt’s other films, like Wendy and Lucy and Certain Women, revolve around moments of freedom and opportunity mixed with exposure and danger. Through Reichardt’s lens, undiscovered wilderness is simultaneously fruitful and treacherous.

It’s on one of these hunts that Cookie stumbles across King Lu (Orion Lee), a scared, naked Chinese immigrant hiding in the underbrush. Cookie helps protect King from his pursuers, leading to a hesitant partnership; after the duo begins living in a shack on the edge of a preindustrial trading post, they come into contact with—wait for it—the first cow of the Oregon Territory.

First Cow isn’t about that cow (though she’s beautiful and nothing bad happens to her). It’s a study of Cookie and King’s relationship as they test each other out for BFF/business partner potential. It’s a symphony of unstructured existence, where most days involve waking up and trying to figure out how to find food.

Magaro plays Cookie with innocence and bewilderment, every thought visible on his face. King is the more savvy of the two, and also more willing to suggest risks. (“I try to believe different things in different places,” he says.) And the question of his loyalty proves to be one of First Cow’s most suspenseful mysteries and heart-wrenching revelations, as Reichardt ties King and Cookie’s fates together with an elegant knot.

First Cow was scheduled to screen as part of the Portland International Film Festival on Fri March 13 at Cinema 21, but that screening has ben canceled due to coronavirus restrictions. As of Thurs March 12, the film is still scheduled to open Fri March 20 at Cinema 21.
If you enjoy articles like this, please help the Mercury continue our mission of providing up-to-the-minute information, progressive journalism, and fun things to do in Portland by making a small recurring monthly contribution. Never forget: Your help is essential and very much appreciated!
CONTRIBUTE NOW