Thanks to Marigold Coffee, Street Roots Is in the Roasting Game 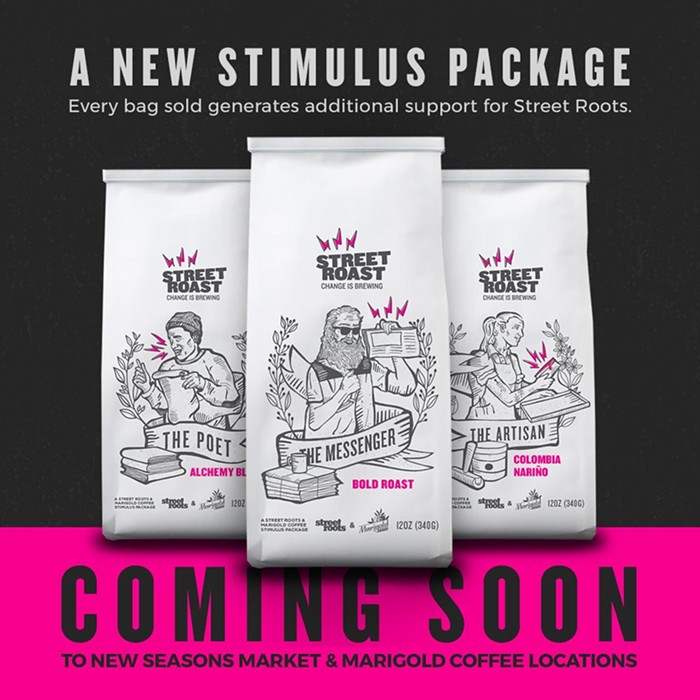 This morning, sisters Cassy and Joey Gleason of Marigold Coffee, are stopping by 10 different New Seasons markets to drop off brand new bags of beans for their latest blend: Street Roast.

If the name sounds familiar, then you’re in on the pun because Marigold is indeed teaming up with the nonprofit newspaper Street Roots, which, as you already know, publishes a print weekly advocating for people who are close to or are actually experiencing houselessness.

Cassy explains that nonprofits frequently approach business like hers and Joey’s with the aim of partnering up on new projects. She says that she and her sister generally try to help when they can, but when Street Roots’ executive director, Israel Bayer, approached them to dream up a new blend that would help his newspaper and his vendors, the Gleasons saw a unique fit and “jumped at the chance.”

The inaugural roast, a bold, big-bodied robust blend called the Messenger, should be on the shelves of those 10 New Seasons by the end of the week. It’ll come in 12-ounce bags that should fetch $13.95 to $14.95 per bag, with proceeds going directly to Street Roots, which will use them to pay for more investigative reporting and to continue to provide vendors with water, coffee, a computer lab, and an all around safe space to be. (Street Roots also cares for its vendors like offering emergency rides to hospitals and paying for overnight stays in local hotels when the vendors get sick.)

Bayer says the project ultimately came about when the folks behind Ideaville and Curate.org approached him about coming up with a for-profit product that could help support his nonprofit paper. Now that he’s found a partner in Marigold, Beyer says he’s excited about this alternative stream of revenue, as his organization has primarily secured its funding through grants and individual donations.

So if you find yourself in New Seasons this weekend, grab a bag and give it a taste-test. If not, you can always purchase a bag via Marigold’s online store or at its roastery at 2815 SE Holgate.

And Cassy says to look out for two more batches—a second blend and a single-origin roast—which will get the roll-out in early 2018.