Christiann Koepke/NORR Agency
Photographer and creative director Christiann Koepke has taken inspiration from her background working with clients in the food and beverage industry along with her European travels and distilled them into her new Central Eastside restaurant, NORR Kitchen, which takes its name from the Swedish word for “north.” The multi-dimensional concept is an offshoot of Koepke’s production studio, NORR Agency.

Tucked in the industrial pocket between lower East Burnside and I-84, the restaurant is off the beaten path, an intentional choice. There isn’t even a sign on the door (IYKYK)—Koepke wanted to create a destination that feels like an escape from the city, and unlike anything else in it. While the restaurant’s decor integrates many Scandinavian design elements—a photo of a Norwegian fjord shot by Koepke is featured prominently on one wall and the cover of the menu—the food has coastal Italian and Mediterranean influences.

Diners can experience the restaurant in three ways, which follows the blocking of the homey dining room—you can settle in at the bar for happy hour or a more casual experience, in the main dining room, which seats walk-ins for à la carte dining and tasting menu seatings (currently available once or twice a month by reservation only), or at the intimate chef’s counter, where you’ll get a front-row seat of executive chef Matt Hobbs and his team at work in addition to his tasting menu selections. 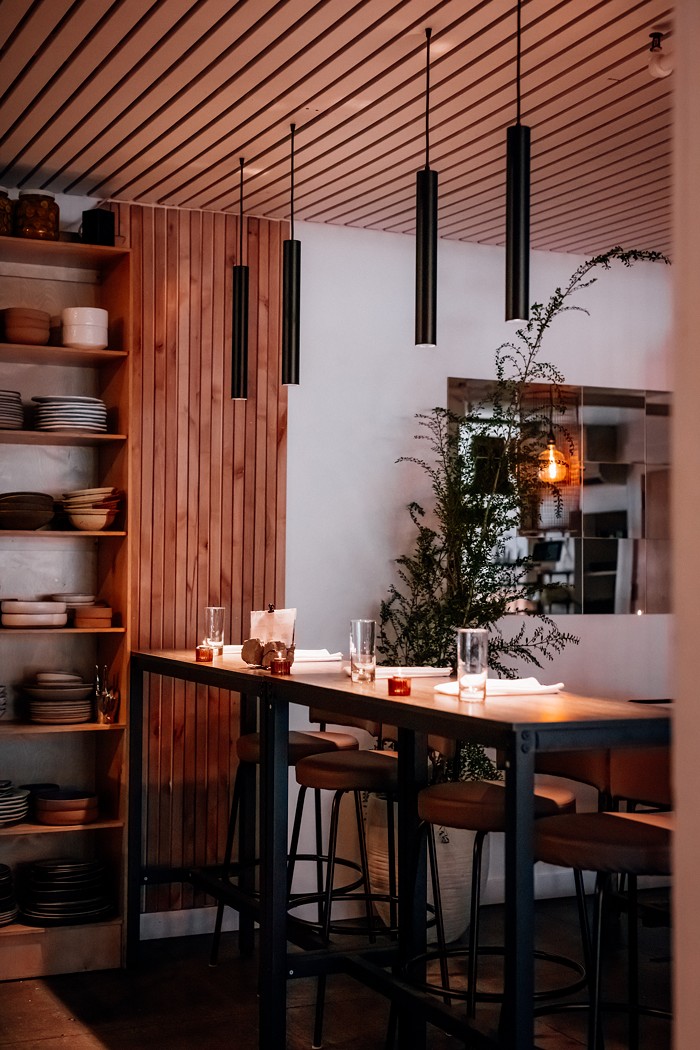 Christiann Koepke/NORR Agency
À la carte dishes include comforting plates of handmade pastas, luscious meatballs made with a mix of beef and charcuterie trimmings, a mouthwatering duck prosciutto bruschetta, and more Italian fare. The six-course tasting menu is seasonally driven, and pulls in more global influences than the regular menu. It rotates between “traditional,” vegetarian, and plant-based options bi-weekly or monthly.


The craft cocktail program will rotate along with the tasting menu, while keeping a foundation of bartender Thomas Radke’s house-made liqueurs and infusions. I sampled a Golden Graham-infused bourbon complete with torched vegan marshmallows, to give you an indication of the magic going on behind the bar.

Chef Hobbs previously worked with Radke at Vitaly Paley’s short-lived restaurant Rosa Rosa. At NORR, the pair reprise the rapport they established at their previous jobs, bouncing ideas between the kitchen and the bar, and repurposing ingredients to cut down on waste.

In addition to dine-in, NORR has diversified its service with an extended roster of offerings, including takeout and delivery, themed monthly meal kits, catering (available nationwide!), and private events. Koepke is also excited to activate the restaurant space for different partners and local companies she works with through the agency, which includes brands like Coava and Freeland Spirits.

“There’s so many different elements [to the restaurant group] because we come from production,” Koepke explains. “In development, it’s ‘What’s the next thing? What’s the new thing?,’ which I think you have to be in this day and age. If the last few years taught us anything, it’s be flexible. Be innovative.” Christiann Koepke/NORR Agency
Constant evolution has been a consistent theme in Koepke’s career. She first found her passion for food in college when she would host intimate, European-style dinners with her friends, connecting not just through food but over hours of conversation filled with laughter and tears. This knack for hospitality would later lead her to co-found the themed dinner series Secret Supper, known for popping up in unique locations.


Having moved to Portland in 2013, in the midst of its emergence as one of the nation’s top food cities, Koepke decided she wanted to be involved in the food industry. Starting off as a food blogger, she picked up a DSLR camera for the first time, and quickly started amassing an impressive roster of clients from Anthropologie to Williams-Sonoma and publications such as Bon Appétit and ELLE.

With the rise of foodie culture within social media, the phenomenon of “the camera eats first” came to prevalence, too. But for these sister companies, this adage holds a special sort of weight. Koepke founded NORR Agency in 2019, where in addition to full service strategy, branding, and marketing, she and her culinary team create, test, and photograph cuisine for lifestyle brands. Their food and beverage production reached such a volume that Koepke had a full culinary department on her hands and found herself wanting to share their creations with the masses. She pitched the idea of translating their production work into a restaurant model to Hobbs, who is also the agency’s director of culinary operations, and NORR Kitchen was born.

“All of my work since day one has all been digital, so having the doors open here now is such a beautiful thing,” said Koepke. “Now we actually have an entryway into what we’re doing… before, we were so removed.”