"As the new lord of Twitter, I will NOT be made fun of!!" Noam Galai / Getty Images

GOOD AFTERNOON, PORTLAND! Look, gorgeous... at the risk of becoming (becoming?) annoying, HAVE YOU VOTED YET? If you don't, you won't have anyone else to blame when the rich buttholes and right-wing buttholes take over the city and state. Look, it's eaaaaaasy... use the Mercury endorsements or cheat sheet to help you out. You have until TOMORROW to either drop your ballot in the box by 8 pm, or in the mailbox in the afternoon so it's postmarked November 8! Now... let's tally up some news!

• Got more election questions? Our Alex Zielinski has a great explainer to tell you what you can expect on election day... including the fact that it may be DAYS before the final results are tallied, due to Oregon's new vote-by-mail law. Election night? More like "Election FORTnight!"

• Tough times for TriMet: The agency's fare recovery have been on a steady decline since 2015, while prices for gas, maintenance, and payroll have been going up, Up, UP—so now its board is discussing a possible fare hike to stop the bleeding. But how much of an increase will be too much? Our Isabella Garcia has the details.

• Police have shot another member of the public, this time it was a man suspected of setting fire to a car in Southeast Portland. As usual we know next to nothing about this situation, other than there was "an altercation" between the cops and the man was sent to the hospital. If recent history is any indication, the bureau will refuse to release the officers names due to "doxxing threats" which is becoming less and less of a believable excuse by the day.

• Don't miss this great OPB report on how the sketchy gunshot detection technology company, ShotSpotter, used lobbying, lawsuits, and lots of pushy PR to convince the city to implement their controversial product.

• Time to take out the trash with another hilarious edition of THE TRASH REPORT from our Elinor Jones! This week: Elon Musk is a verified loser, anti-charter reform liars, Rihanna's sketchy pals, and if you vote? You get PUPPIES! 🐶 😍

• This headline tracks: "In Washington, right-wing sheriff candidates believe their power exceeds the federal government." (Can someone let them know that Walker, Texas Ranger is a fictional character?)

After you make sure to vote by Tuesday, treat yourself to a fun night out—or three—there's plenty of events to hit up, from Aminé with the Oregon Symphony to Phantogram and from QDoc Film Festival to Quentin Tarantino: Cinema Speculation Book Tour. https://t.co/z1bBgagsqj

• A day before midterm elections, everyone is... as expected... losing their goddamn minds—particularly billionaire crybaby Elon Musk who is getting mercilessly dragged and imitated on his own new overpriced platform (and suspending people for it), and is now telling all of his Twitter followers to vote Republican. (I don't think that's gonna improve your situation, bud!)

• Republicans (the party of domestic terrorism) are already doing their best to fuck up this election too, by filing lawsuits to disqualify thousands of mail-in (AKA absentee voter) ballots in three hotly contested states.

• As if tomorrow won't be crazy enough, there's also a full lunar eclipse which will apparently turn red (not ominous at all). Weather permitting, you should be able to see it in Oregon beginning just after midnight, and totally eclipsed at around 2 am in the morning.

• Today in news I know I shouldn't laugh at (and yet?) 😬: "Ted Cruz hit with beer during Astros World Series parade in Houston."

• And finally... me, tomorrow, election day.

watching it all burn in my new top pic.twitter.com/zDtpDRec2O 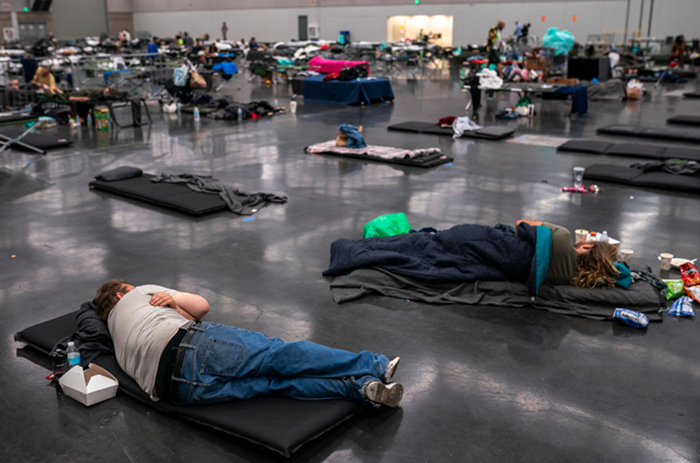