Meet the Trans Midwife Changing the World's "Most Gendered Profession"

Editor's note: This story was originally published for our Seattle-based sister paper The Stranger. 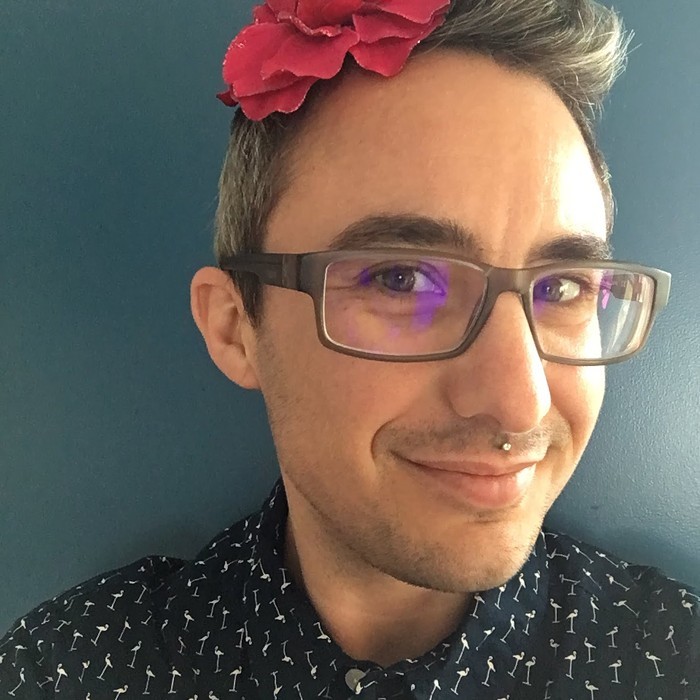 Simon Adriane Ellis is changing the midwifery paradigm. SIMON ADRIANE ELLIS
The blizzard raging outside Simon Adriane Ellis's window was the worst New York state had seen in nearly a decade. The ambulances wouldn't arrive for 27 minutes. Simon tried to remain calm. He had to keep his best friend from giving birth until the paramedics got there. Armed with two read-throughs of the book The Birth Partner and a call to his friend's midwife, Ellis was able to hold off the baby's birth by telling his friend to breathe a certain way.

The paramedics, miraculously, got there. The baby was born. Ellis had never witnessed a more human moment in his entire life. With some prompting from his friend, he became a midwife.

Now, 15 years later, Ellis is specializing in midwife care at Kaiser Permanente. Part of his practice is helping trans men and non-binary people get pregnant and give birth.

"I do a lot of work around trans health generally," Ellis, who is trans himself, said. "Stuff like hormone therapy and gynecological stuff but my main focus is educating trans providers on caring for trans and non-binary folks who are creating families, whatever that looks like."

We were at Cafetal Quilombo on Beacon Hill, a couple blocks from Ellis's house. He had just gotten off a long shift and met up in between afternoon naps. We spoke between bites of our respective tamales. He'd delivered a baby that morning, just hours before our interview.

During the first years of Ellis's venture into the health care world, he came out as trans. He knew from the get-go that he wanted to work with other trans folks.

"I was the second male or male-ish person who had taken that course," Ellis said. "Everyone rolled their eyes at me like 'Why are you doing this?' When I said why—trans men having babies—they doubted it, and I was like 'This is a real thing!'"

Midwifery has pretty much been around since babies have been born. There's always been someone on the sidelines coaxing the miracle of life into being. A recent Time piece posits that a midwife squatted next to our pals Mary and Joseph in the manger to help baby Jesus along. It's a profession that was founded by women, for women, and the life-saving work in midwifery has been almost exclusively led by women. That's important, Ellis acknowledges.

"But, there’s room to grow," Ellis said, "The realities are changing."

When Ellis first expressed his interest in working with trans and non-binary folks as a midwife in the early 2000s, he was met with scoffs. Not long after, in 2007, Thomas Beatie, a trans man, got pregnant, changing a lot of people's perspectives on pregnancy and gender.

"Things have changed to some degree and in other ways they haven’t changed at all," Ellis said. "It’s been hard personally going through this path to become a midwife. It continues to be hard to be a midwife and it’s hard on my trans and non-binary patients," Ellis said. "It’s maybe the most gendered profession ever."

When it comes down to it, Ellis believes the biology between a cisgender woman giving birth and a trans man giving birth is negligible. However, there's not much research available to back that up.

"The biggest study we have—we have one really small study—if you think through it physiologically," Ellis said, "if a person is not taking testosterone and they don’t have an outside source of testosterone, then it’s just a routine pregnancy."

The real difference is in terms of emotional support and a need for advocacy. Trans health care is just health care, is a sentiment Ellis echoed many times during our interview. But people, especially providers, haven't figured that out.

I thought back to that small study Ellis mentioned. Why is there no medical research around this? I asked.

Ellis laughed, and, around a bite of tamale said, "Because nobody cares."

He chewed. "Let me re-say that.

"There’s very limited research on trans people generally. We’re just now—everything we do in terms of trans health, we have a profound lack of research than other types of health care. There’s a profound limitation on research we have and that is because, historically, trans and non-binary people have not been recognized as existing. Early recognition of that within the medical environment was seen as a problem.

"The more of us there are in medical careers, the more research we’re going to get. We have to build up our numbers so we can lead the research to get the care we need."

It's typically 10 years from the research lab to the bedside table when it comes to medical innovation. Ellis sees this in cultural change, too. Back when he started as a midwife in 2011, the terrain was completely different. That was seven years of fighting and backlash to get care for these different identities formalized within midwifery practice.

The way he sees it, there are three years to go until the midwife profession embraces this diversity of care.

"By the time we get light rail to Northgate everything will be fine," Ellis said. "We’re gonna win this fight. There’s not a future in which we don’t. It’s just a matter of getting there."

Tags: Health LGBTQIA+
If you enjoy articles like this, please help the Mercury continue our mission of providing up-to-the-minute information, progressive journalism, and fun things to do in Portland by making a small recurring monthly contribution. Never forget: Your help is essential and very much appreciated!
CONTRIBUTE NOW