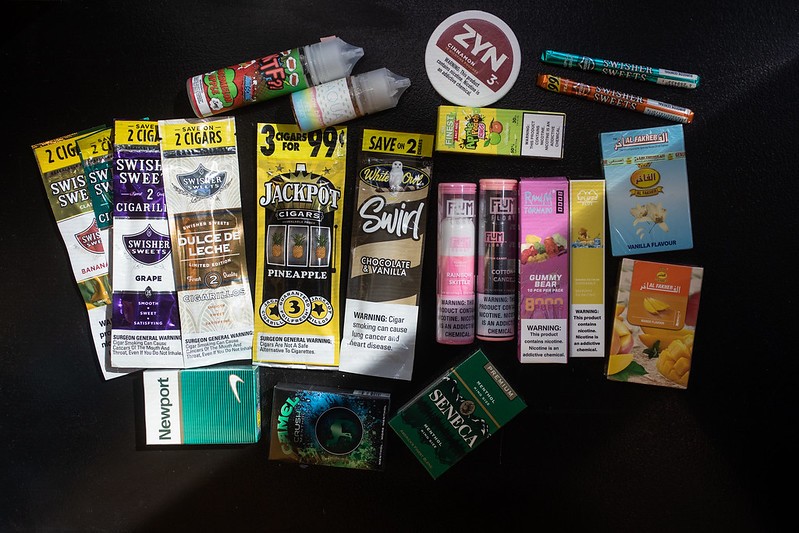 Tobacco and nicotine products that no longer be sold in the county under the proposed ban. Motoya Nakamura / Multnomah County

Multnomah County leaders heard hours of public testimony Monday about their proposed ban on flavored tobacco and nicotine products, including menthol. Public comments were split between retailers concerned that a ban on flavored tobacco would potentially shutter their shops, and health officials and community members urging the passage of the ban to combat the rising rates of youth vaping and smoking.

“We will lose an entire generation of people if we continue to allow big tobacco to sell whatever they want,” said Haoua Dogo with Upstream Public Health, a supporter of the proposed ban.

Multnomah County, at the direction of County Chair Deborah Kafoury, began crafting a proposed ban on flavored tobacco products in August, with a goal to stop young people from developing a nicotine addiction through flavored tobacco products. According to the US Centers for Disease Control and Prevention (CDC), 14 percent of high school students and 3.3 percent of middle school students in the nation reported using e-cigarettes in 2022. Approximately 80 percent of youth smokers who use e-cigarettes in the US report using flavored e-cigarettes.

The proposed ban, which is expected to be voted on in December, would end the sale of flavored tobacco in the county, including at convenience stores, liquor stores, vape shops, and hookah lounges. Each of these tobacco retailers would be subject to an annual inspection by the county, with violators offered a remediation plan and follow-up inspection. Retailers who are still in violation of the ban on second inspection would be penalized with a fine. Individuals would never be punished for buying flavored tobacco products from stores in violation of the ban. This policy doesn’t apply to online tobacco sales because, as of January 2022, state law prohibits the sale and delivery of any cigarettes, vape devices, e-cigarettes, or smokeless tobacco online.

Representatives from every major health system in Portland, including Providence, Kaiser, Legacy, Oregon Health and Science University (OHSU), and OHSU’s Doernbecher Children's Hospital, commented in support of the proposed ban. A representative from Portland Public Schools (PPS) also expressed the district’s support of the ban, stating that vaping has transitioned from a classroom nuisance to a full blown crisis in schools, leading PPS to take the doors off of some bathroom stalls to try to limit the areas students can hide to vape in school. Advocates with the American Cancer Association and American Heart Association also urged county commissioners to pass the ban.

Several licensed tobacco retailers, grocer associations, and tobacco lobbying groups spoke in opposition to the ban Monday. They argued that Oregon already has made strides to limit youth tobacco usage, like raising the legal smoking age to 21 in 2018. In 2018, the Oregon Health Authority found that 18 percent of minors who attempted to buy tobacco products through state regulatory tests were successful.

Retail owners also raised concerns that banning flavored products would create an unregulated illegal market because flavored tobacco products would still be sold in other counties and possibly resold in Multnomah County.

Representatives from the National Hookah Association and hookah lounge owners asked the county to make an exemption in the proposed ban for hookah—flavored tobacco smoked through a large hookah pipe. Hookah lounge owners and supporters noted that hookah is considered a cultural practice and that hookah has not been identified as a problem among youth smokers the way that e-cigarettes and vapes have.

Some white retail store owners and representatives from the tobacco industry argued that it is racist to ban menthol cigarettes because Black smokers overwhelmingly choose menthol-flavored tobacco over other tobacco products. According to the CDC, approximately 85 percent of non-Hispanic Black or African American adults who smoked used menthol cigarettes in 2019. Yet Black representatives from the African American Tobacco Control Leadership Council and other cultural organizations refuted that claim, noting that Black people—along with Hispanic people and members of the LGBTQ community—are more likely to smoke menthol cigarettes because of predatory marketing tactics used by tobacco companies.

“The white men telling us that the Black community thinks the policy is racist are wrong,” Avery Dukes with Flavors Hook Oregon Kids—an organization opposing flavored tobacco—told the county board. “As a Black woman, I can say with confidence that we abhor the disproportionate targeting that tobacco companies and stores have been doing for years and are still doing today. They shouldn't mistake addiction for enjoyment.”

Similar bans on flavored nicotine products have been challenged in court. In 2019, a temporary ban on flavored vape cartridges in Oregon amid a series of severe vape-related lung infections throughout the nation was halted by a state appeals court. Washington County recently tried to ban flavored nicotine products, but it was overturned by a county judge who ruled in favor of a challenge from the 21+ Tobacco and Retail Vape Association. The judge ruled that a flavored tobacco ban must come from the state, not county by county; Washington County is appealing the decision.

Richard Burke with the 21+ Tobacco and Retail Vape Association told the commissioners Monday that the association will launch a legal challenge against the county ban if it is approved by the board.

“If this passes,” Burke said, “we will fight it vigorously.”

When asked about possible legal challenges to the proposed ban, Multnomah County spokesperson Julie Sullivan-Springhetti said that the county isn’t concerned about being impacted by the legal challenge in Washington County “because only the Washington County ordinance was at issue in that lawsuit.” Sullivan-Springhetti also said that banning flavored tobacco products is not a novel idea and over 300 cities and jurisdictions nationwide have already passed similar restrictions.

The Multnomah County Commissioners will hold a first reading of the proposed ban Thursday, with a final vote on the proposal planned for mid-December.