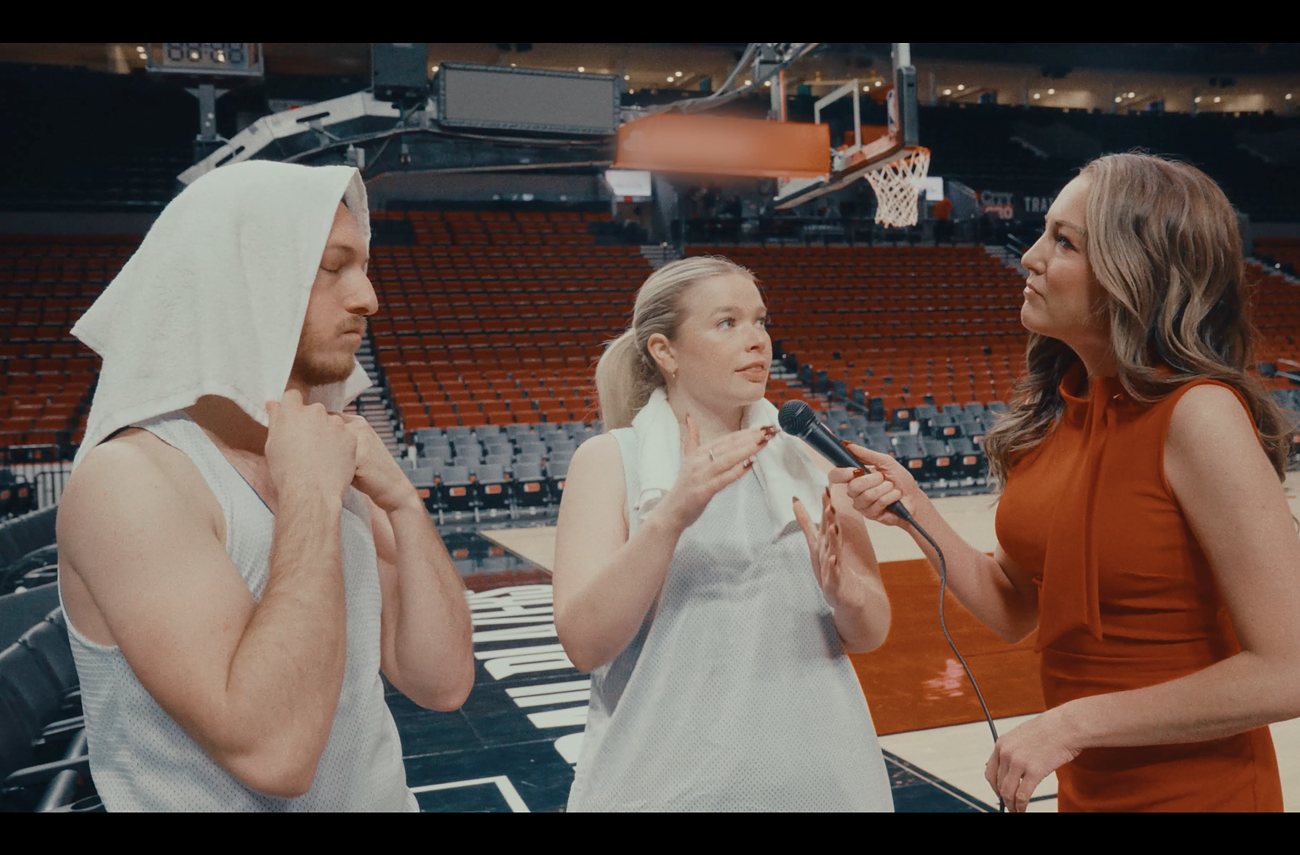 Wynne (center) and sports commentator Brooke Olzendam in her new music video for "CATALYST II." courtesy of the artist

Welcome to 2023, music nerds! If the cold and gray forecast, post-holiday blues, or some sort of circulating virus have got you down, take a gander at this list of upcoming Portland-relevant events and releases—there's plenty to look forward to! This week we’re dreaming of two upcoming shows featuring a slew of Portland-based artists, Wynne’s rap video sequel, “CATALYST II,” and two Oasis EPs from neo-soul singer Veana Baby.

At the end of January, country-folk musician Jeffrey Silverstein and Bay Area lofi indie folk outfit Credit Electric will kick off a short Pacific Northwest tour, starting at the Doug Fir. Silverstein submerges his audience into calm and cinematic soundscapes from his EP Torii Gates (released via Arrowhawk Records in 2021), which featured an atmospheric lyric-free lead single “Trip Sitter.” Credit Electric—songwriter Ryan LoPilato and guitarist Cameron Iturri-Carpenter—are in the process of touring their project Out Of Love In The Face Of Shadow, which dropped in October. Local music fans will want to arrive early to hear electronica- and R&B-infused pop songs from synth-heavy, beat-maker Dana Buoy. (Doug Fir Lounge, 830 E Burnside, Thurs Jan 19, $15, tickets here, 21+)

New release(s) from a Portland-relevant artist.

Remember five years ago, when Lake Oswego-raised rap queen Wynne absolutely slayed as the only female rapper in this cypher? Or when she made waves with the video of her rapping for six minutes straight  in the video for single “CVTVLYST?" Well, just this week the Portland-based rapper released the sequel, “CATALYST II,” and like the original, this one tracks at over six minutes long, has a trappy beat, and sees the emcee switching up her flows often. She gives a clinic in clever wordplay and lyrical puns while divulging tidbits from her life, alluding to thousands of dollars Wynne and team lost out on from COVID-forced tour cancellations. Wynne delivers her verses with swag and gusto: “Flow on time/ I don’t ever pay a late fee/ Pinky up when I rap, I’m a lady/ I’m a Dame in the city, can’t trade me/ from the burbs, but a sub never made me.” Shot and directed by Riley Brown, the music video shows a lot of growth, and a jump in production value from Wynne’s first installment, while also still maintaining her laid back, tom boy-esque personal style, and crew of day-ones, including Rafael “Raf” Newman and Itay Lerner. The video is mainly set on top of Oregon Helicopters Downtown Portland Heliport, so we’re getting lots of epic wind shots, nighttime city views, and even some footage from inside the moving helicopter. Oh, and there’s a skit filmed inside the Rose Quarter (Moda Center) arena with Trail Blazers courtside reporter Brooke Olzendam, in which Wynne plays an overconfident baller who just lost. It’s all repeat-worthy, so watch and enjoy.

If you’re anything like me and got promptly enveloped in the holiday havoc last month, you may have missed Veana Baby dropping a new EP, Oasis Pt. 1, on December 9. Then on Dec 23, the Portland-based soul singer-songwriter immediately followed with the release of a second EP, Oasis Pt. 2. As one would expect from the dueling titles, the sounds found on both projects are incredibly smooth, chill, and calming. Part one starts with some tasteful high-pitched vocal distortion that floats throughout—it's especially lovely in the intro to the sultry “Cotton Candy.” Part two kicks off with ethereal vibes and haunting vocalizations that make the aptly-titled “Welcome to the Oasis,” feel like a return to the wild. “Creation,” is lovely and lofi; fans of Mahalia and Jamila Woods will enjoy the closing track, “Clouds.”