Also in HEAR IN PORTLAND: Portland Music Month's last week; don't hold your breath until the Roots' show—but it is pretty soon 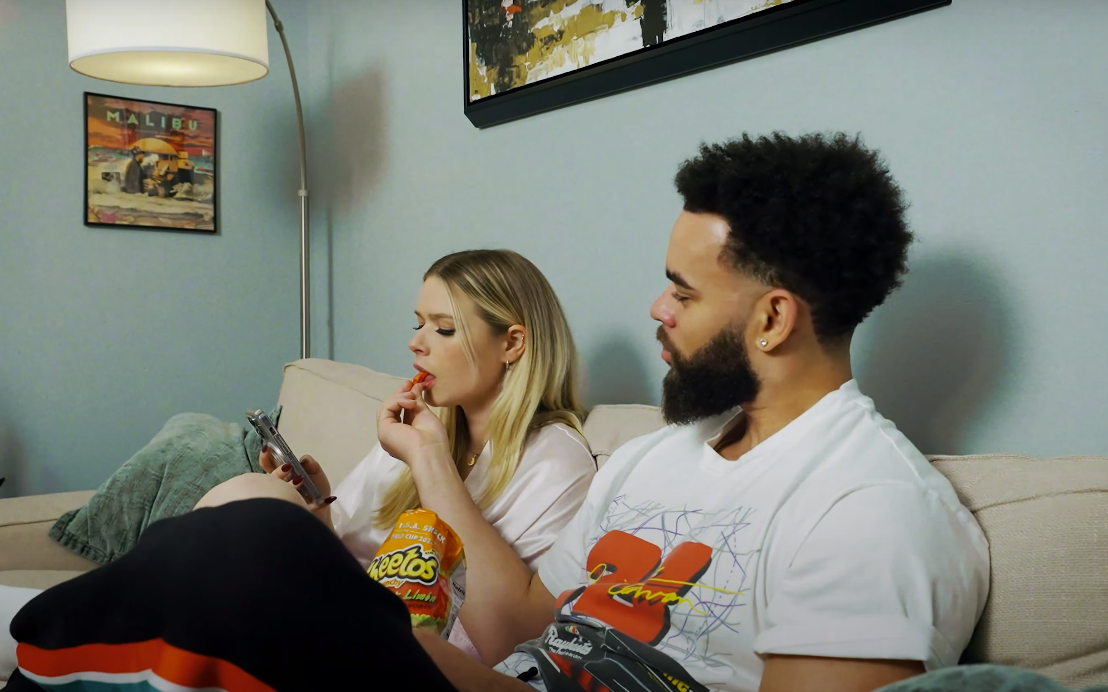 Screengrab from the "Look at You" video whereinJalen Ladd feeds Wynne Flamin' Hot Limon Cheetos while she scrolls her phone. Riley Brown

The darkest month of the year is almost through, and there’s light at the end of the tunnel! Whether you’re in the mood to get out on the town and see one of the many remaining Portland Music Month shows, stay home and have a music video marathon, or hold your breath until the Roots show up to serenade you (not as long as you'd think!), there’s plenty to get into.

Last week we recommended cowpunks Jenny Don’t and the Spurs’ upcoming show (Sat Jan 28), but that’s just the tip of the iceberg when it comes to the sheer variety of sounds still left to sample from Portland Music Month (#PMM). While we’re already on week four, there are two sets yet to come from the Christopher Brown Quartet, who will perform as part of his ongoing Wednesday night residency at jazz club / pizzeria the 1905 (Wed Jan 25), along with a single release show from Babers (Wed Jan 25) where Shy Honey Caragold opens the night. “This will be the kickoff of a new era of Babers tunes, and we will have a brand new set for you,” the band recently wrote via social media. Another unmissable show goes off the next day, when local, married, music duo Dreckig—AKA Papi Fimbres and Shana Lindbeck—take their trippy, electronic, krautrock-infused latin dance music to the Mississippi Studios stage (Thurs Jan 26). Portland Music Month tickets are $1 more per guest than they would normally cost, and that dollar supports the non-profit's mission of helping independent local artists. Perhaps the best part: Attending one (or more) of these dozens of #PMM shows at the city's independent venues might just pay off in a big way, as every show one attends provides exponentially more opportunities to win prizes, like a vintage British car, an E-bike, or two first class tickets to anywhere in the US. Check out contest details and full #PMM lineup here.

“Look At You,” Wynne

We talk about Wynne pretty often in this column, but what can we say? She’s relevant. It’s fresh. We’re obsessed. The Oregon-raised rap queen dropped a new video for “Look At You” a few days ago, and we are transfixed. Sporting a ton of tomboy-chic realness, Wynne looks fierce while lip syncing her own lyrics. It’s shot and edited by esteemed PDX music video maestro Riley Brown, but self-directed like her last video; the video credits Win Loss Tie, the pun-titled joint venture by Wynne and business partner / audio engineer Itay Lerner. There are lots of iconic shots of Portland locations, too—making the video a super fun watch.

An Evening With the Roots

One of the best and most legendary live acts in show business today, the Roots, will bring their tour through Portland’s Crystal Ballroom for a spectacular show audiences won’t soon forget. Led by prolific lyricist Black Thought—ahem, one of the most skilled emcees of all time—and drummer Questlove, the Roots put on an electrifying and soulful live show that’ll send delightful chills down your spine. It's definitely worth making the trip downtown on a Tuesday night. (Crystal Ballroom, 1332 W Burnside, Tues Feb 21, 8 pm,  $88.99-160, tickets here, all ages)