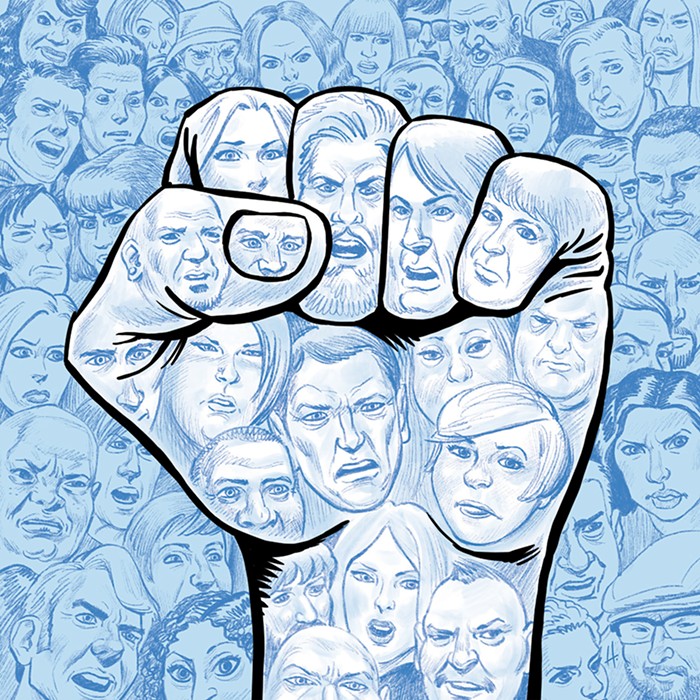 Navigating Politics at the Dinner Table

Resisting Patriot Prayer, Part One: How to Talk About Alt-Right Groups

Resisting Patriot Prayer, Part Two: How to Creatively Humiliate the Joey Gibsons of the World

A trigger is a stimuli that transports a person back to their memory of a traumatic event, often causing a fight, flight, or freeze response. There’s an ongoing argument that the word is overused, and various sides have rallied for or against the use of trigger warnings on college syllabi or in classes. I don’t see how trigger warnings hurt, but I assume it’s somehow related to the power struggle expressed in David Mamet’s Oleanna, and since I could never be more eloquent than that play, you’ll just have to watch the movie. (Oooh, you’re in for a William H. Macy treat!)

An abbreviation of “documents.” Doxing is a standard method of retribution in which a person’s private and identifying information is made widely public for the purposes of intimidation and harassment. Doxing is a modern tactic used by many sides. The practices of revealing the names of people who work at abortion clinics and releasing a list of alleged KKK sympathizers could both be considered doxing.

A February episode of the NPR podcast Hidden Brain questioned the timing of the 2017 #MeToo movement and its relationship with the Trump administration’s rise to power, theorizing that #MeToo might be a sign of horizontal violence. Coined by 1950s French psychiatrist and philosopher Frantz Fanon, horizontal violence describes the misguided aggression that oppressed people visit upon each other when they can’t impact power structures above them. University of Maryland professor Ashwini Tambe updated and expanded the term, describing #MeToo as horizontal action, rather than violence.

Professor Sally Eck teaches this term in her Women’s Studies courses at Portland State University. In a 2014 video on the subject, Eck explained, “We spend most of our time learning to critique and problematize oppression in our culture, but no one ever tells us what to do about it.” In general, Eck’s course seeks to “interrupt the dominant paradigm,” not as actual vocal interruptions but as a broad, lifelong practice that could be anything from correcting someone’s misgendering of a colleague to making eye contact with a person in trouble to let them know you’re paying attention and are there if they need help. As it becomes clearer that ongoing resistance almost never means winning, interruption feels like a finite, achievable goal—something that can help us feel done at the end of the day so we can rest for tomorrow’s interruptions.

Trump Supporters Brawl in Salem as US Capitol Attacked