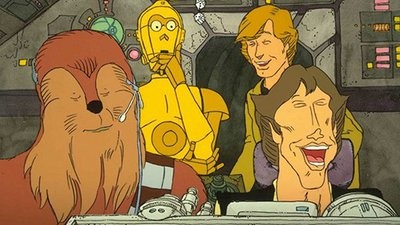 It’s become the Hollywood’s gift to the city, this annual slew of freaky-ass, nostalgic sci-fi Christmas junk: The utterly execrable Star Wars Holiday Special, paired perfectly with the weirdest goddamned commercials they can find, done up as big and bewilderingly as possible, because this year is the 40th anniversary of the night Bruce Vilanch and company wiped their ass with Star Wars and smeared the wadded remains all over CBS’ cameras. In its defense (LOL jk there is no defense for this shit), the Boba Fett cartoon is pretty cool.