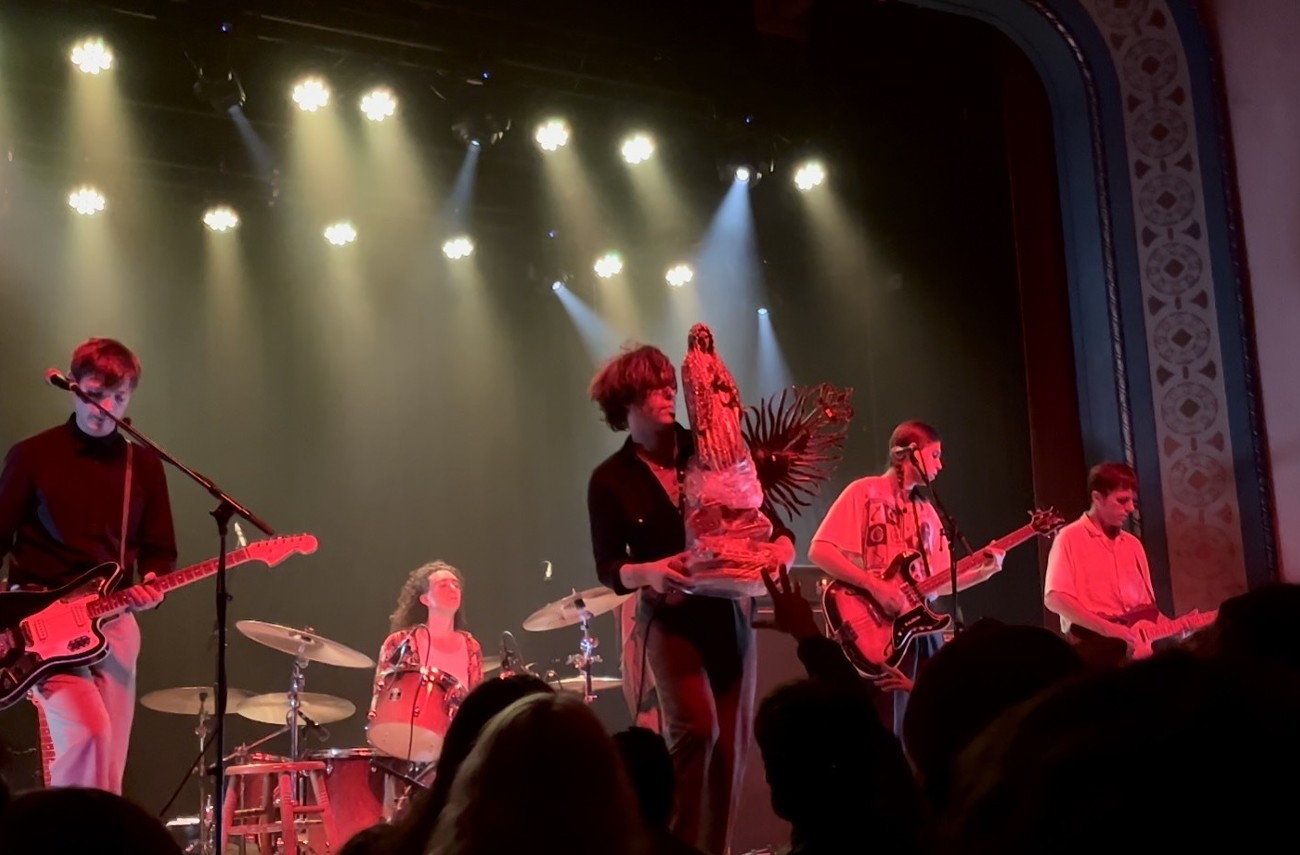 Rønnenfelt shook this yard-sized statue of the Virgin Mary at the crowd several times. Suzette Smith

"Any of you pricks wanna leave your chairs… respectfully?" Elias Bender Rønnenfelt called to the crowd, at a Thursday October 13th moody rock double bill of Iceage and Earth.

One song earlier, Aladdin Theater's auditorium had been at full brightness, and we had anticipated melting into our seats for both groups—remembering fondly a set in a nearly empty Detroit ballroom where we'd laid on the floor while Earth reverberated our atoms.

Iceage was having none of that.

Certainly we'd heard tales of Rønnenfelt's stage magnetism and over-it hair flips. It seemed impossible that a group with five full length records under their belt would still inspire this much angst. But over the course of Iceage's hour-long set, Rønnenfelt straight-up bullied Portland's polite, 20-something crowd into a respectable pit of chaos and camaraderie.

The set list drew heavily from the group's most recent record, Seek Shelter. A live version of "High and Hurt" hit hard and odd—the song interpolates "Will the Circle Remain Unbroken" by changing most of the hymn's lyrics and keeping only the dirge-like chorus, which Rønnenfelt dragged to its limit.

Iceage is fucking incredible live—charismatic sure, but also precise, LOUD, and sufficiently unique.

Two songs in—as the mob still lacked the energy he wanted—Rønnenfelt disappeared backstage and brought out a yard-sized statue of the Virgin Mary, complete with detachable halo. He shook it at the audience angrily, then turned his head with the kind of derision we could barely remember from pre-pandemic days, and set it up on an amp next to guitarist Johan Wieth.

His goading—and rageful prayer?—paid off, as 50-100 concert-goers flailed into various formations before eventually coming together as a seriously respectable mosh pit—full-on circle.

There are going to be a million moments where we begin to feel like we're back. But for now we give you what will hopefully be the first in a continuing series.

Phone use: respectful / watch out, you're gonna lose it

That one guy: solitary man reeking of cannabis squeezes past

Exceptional craft: one person, covered in a lace shawl, records an entire song with statuesque immobility

Torpedo mosher: Struck the crowd like a bomb, during "Lord's Favorite."