See, this is what you get for closing Peterson's...

The Portland Coalition Against Poverty is either a bunch of bored college kids with a credit card, looking for a cause, or the most exciting protest group I've encountered since coming to the city. I think, in fact, that it's probably both. But reader, I am in love.

There is NOTHING like a midsummer night's protest. Especially when people are shouting the name of the boss of Portland Patrol, Inc, at full volume, outside his office. Downtown livability, indeed... 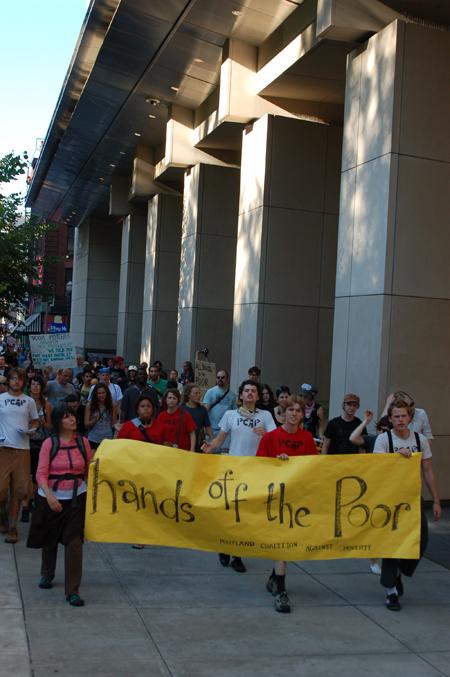 More after the jump.

Tonight's protest was introduced by a guy named Marco: 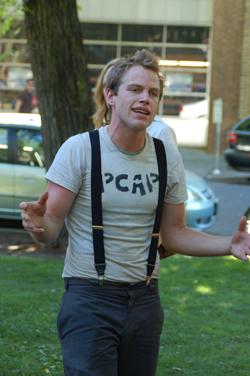 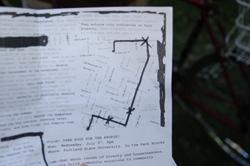 Lawrence Bishop, 60, was marching, like everyone else, "to repeal the sit/lie ordinance. It's illegal for people to rest here in Portland. They're criminalizing it." 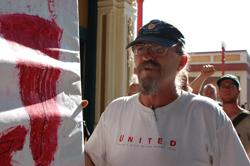 Wesley Flowers was there. He's pissed off for obvious reasons. 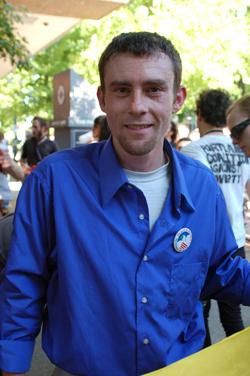 There was plenty of bannering, plenty of shouting, "FUCK CLEAN AND SAFE," for example, and "STOP THE SWEEPS!" and "HANDS OFF THE POOR! END POLICE HARASSMENT!" and so on, and plenty of guts. 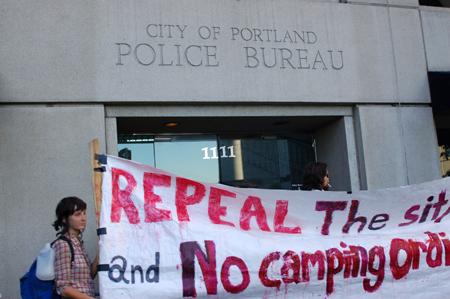 And someone's been reading the newspaper... 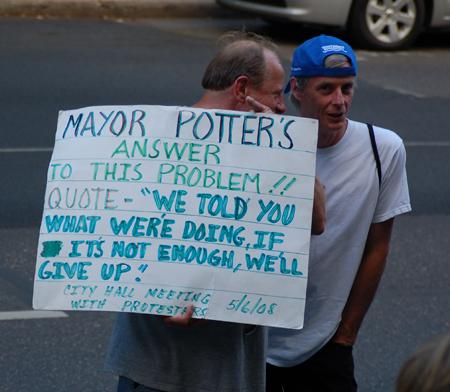 The protest was organized in response to last week's sweeps in advance of the Waterfront Blues Festival. The protesters say they've heard the cops have been using stopwatches to give people two minutes to get out from under the bridges, before clean and safe guards messed up their property with bolt cutters. The protest literature was designed to give people a militant (and occasionally, a little over the top, granted) understanding of the key players in downtown's homeless enforcement community. And I quote:

Portland Patrol are private security officers located at NW 2nd and Davis. They're paid for by the PBA and the city. They're among the worst abusers of poor and houseless folks, because they are unregulated. They employ barely literate out-of-towners to patrol our noble streets, and have the gall to give those fools pistols. If you ever forget who they are, just light a cigarette in Pioneer Courthouse Square. They enforce city ordinances on park property. They dispense exclusion tickets to travelers and the weary.

Yeah yeah. But how about this:

Portland Police Bureau. Your friendly neighborhood police station. Downtown precinct, headed by Commissioner Mike Reese, is filled with ill tempered, sadistic cops. Some of them are here with us today. The PPB has a record of abuses a mile long-you might recall their "tasers for lightless bikers" program. They also perniciously hate poor folks. At the City Hall Protest in May, they planted drugs, falsified reports, and created arbitrary requirements for protesters, forcing them to stay in a 4ft arching zone on the public sidewalk. Police exist to protect the property of the rich and the property of the government. Watch them today and see what riles them up.

Then, of course, there's this:

Portland Business Alliance...the head honchos. Kings of the hill. Rich folks, pursuing profits at the expense of the poor. Look into any evil in Portland, and you'll find them at the back of it, paying the bills. They forced the sit/lie law through the City Council, with generous campaign contributions, and paid for the city's legal defenses when the law was declared unconstitutional. Then, in 2007, they got a different version of the same law passed again, at a cost of $150,000. The laws they pass are criminal, and are aimed at social cleansing. The message is simple: poor folks, get out. You're bad for business.

Yeah, fuck it, "social cleansing," why not. Like I said: This is what you get for closing Peterson's...

Comments 21
Tags: News Blogs
If you enjoy articles like this, please help the Mercury continue our mission of providing up-to-the-minute information, progressive journalism, and fun things to do in Portland by making a small recurring monthly contribution. Never forget: Your help is essential and very much appreciated!
CONTRIBUTE NOW