County Chair Ted Wheeler this morning told the Mercury that he doesn't feel $15million for Major League Soccer is an appropriate use of urban renewal money—setting the stage for a fight with Mayor Sam Adams unless the mayor can find an alternative source for the cash.

Adams is hoping to plug a financial hole in the planned renovation of PGE Park with money from a yet-to-be created urban renewal area (URA) in Portland's central city. But the URA is unlikely to have been created by September 1, the deadline for the city to finalize its deal with Portland Timbers owner Merritt Paulson. In the mean time, Adams and Wheeler have been meeting every two weeks with PDC experts and downtown big hitters like the Portland Business Alliance and Portland State University to try to hammer out what a new URA might look like.

Still, it's not clear how Adams plans to extract the extra $15million before the URA's creation process is complete. Adams can hardly raise the $15million as a footnote over the coming months, with MLS such a controversial issue for Portland.

Wheeler delivered a pointed presentation to the group this morning, arguing that since URAs are supposed to improve "blighted" areas, the city is going to have to agree on what "blight" means downtown. The definition of "blight" in state law is "wishy-washy," he said, before encouraging the group to decide whether "we're taking dollars from areas that are truly blighted, and not just with a wink and a nod around the table here."

Wheeler repeated his perennial point that the creation of a URA means at least a quarter on every tax dollar is taken away from vital county services like jails and drug treatment, and also the school district. "We're going to make some very real trade offs on some of the important community services we're investing in," he said.

After the meeting, the Mercury asked Wheeler whether he intends to oppose any effort by Adams to take $15million from the URA to fund the renovation of PGE Park for MLS.

"I hope I didn't come across as being confrontational," he said. "It's just that the trade offs with urban renewal are not theoretical. They are very real. I'm helping focus the question. I'm not telling people what to do. I just want people to be able to consider these questions."

"If people believe that renovating PGE Park again is more important than some of the critical services in our community then that is up to them," said Wheeler. "But from my perspective, the answer is no." 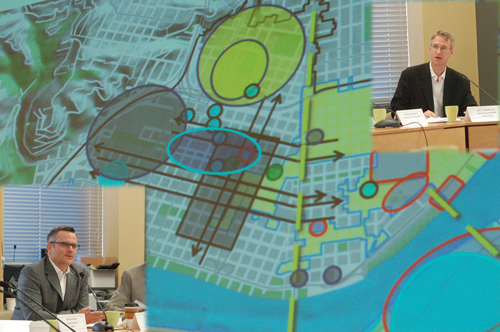 ADAMS AND WHEELER: Discussed "trade offs" with the creation of an urban renewal area this morning...

The $15million hole came up at city council last week, with City Commissioner Dan Saltzman reiterating his resistance to the use of URA money to renovate the stadium. He said he thought Paulson should be put on the hook to find a source for the money, prompting City Commissioner Randy Leonard and Mayor Sam Adams to effectively shush him. Leonard said the city needed to have some "integrity to [its] negotiations" with Paulson, while Adams said urban renewal money was still on the table as a "last resort," but that "the great thing about a democracy is that we can move forward with slightly different points of view on the detail."

The prospective problem for Adams is that Wheeler doesn't look prepared to allow the mayor to view the $15million as a matter of "the detail." There'll be no glossing-over of the decision, no "nods" or "winks" with Wheeler at the table. Wheeler's vocal up-front position on blight issues seems designed to push others around the table—Adams, the PBA, PDC, in particular—to take political responsibility for their decisions on a new URA. Perhaps Wheeler's presentation was not intended to be as "confrontational" as when he savaged Randy Leonard over the issue in council back in March, but there's more than one way to fight.

In semi-related news, the Mercury asked Wheeler for advice on the completion of a triathlon. Your reporter is training along with former Mercury news editor Scott Moore for the sprint triathlon in the Willamette this August. Wheeler said the best way to go is to focus on the bike and the run. "You're not going to win in the swim," he said. "It's the bike and the run where you can really make up some time." Wheeler has completed two Iron-Man triathlons in his time (these consist of a 2.4 mile swim, 112 mile bike ride and lastly, running a full marathon...ouch). "It's all about tenacity," he said.

In this forum, the future of URA funding for the MLS deal may well depend on whether Adams has any tenacity left after going a full 12 rounds with the attorney general over the Breedlove scandal. Wheeler, on the other hand, seems just to be getting warmed up.

Comments 13
Tags: News Politics Blogs
If you enjoy articles like this, please help the Mercury continue our mission of providing up-to-the-minute information, progressive journalism, and fun things to do in Portland by making a small recurring monthly contribution. Never forget: Your help is essential and very much appreciated!
CONTRIBUTE NOW