Make Way for the Parking Lot!

3
Yes! Hot Ladies! Hot Rubber! There is a strip club, Blush to the north on 99E, the Acropolis just to the south, another proposed strip club Casa Diablo next to them, and Les Schwab Tires proposed right in the middle of three strip clubs and that's all fine. We'd love to keep our garden and livestock supplies tucked behind the tires. There are no strippers in sight, but there are chicks!! And lots of plants, vegetables, fruit trees, flowers, ducks, chickens and goats.

All part of what makes the Portland metro area unique, right?

The lease to Naomi's was short term initially, because Les Schwab has been trying to buy the neighboring acre property for their new tire center and said they did not know what the city would require for development. The plans on record at Portland's BDS, publicly available, show that all of what Les Schwab would like to build and the parking spaces they are allotted fit on that neighboring acre on 99E / McLoughlin Blvd.

There are no plans for development on the land Naomi's is on to the west facing residential houses, other than Les Schwab asking for 2 1/2 times the parking they are allowed, which, if approved by the city and neighborhood, still works.

The farm and garden shop could stay right where it is and accommodate those additional 30 parking spaces if needed, as the two properties total 2 acres.

It would be really cool to see both there and the neatest place to wait to have your tires fixed. As customers of both companies and neighbors, there aren't many sites unpaved and zoned like this one which has been a garden nursery for many decades. While we know Naomi's can move elsewhere, we hope Les Schwab will make a decision that reflects the outpouring from their customers and the group of neighborhoods they're moving into, including Sellwood, East and West Moreland, Ardenwald-Johnson Creek, along with Oak Grove and the City of Milwaukie.

Les Schwab has written us that Naomi's is great and exactly the tenant they'd want back, after they develop. As there are no plans to develop that land, we're just asking Naomi's be able to simply stay and keep growing.

Friends of Naomi's Organic Farm Supply
http://friendsofnaomis.wordpress.com/
friends of naomis on June 9, 2011 at 10:51 AM Report this 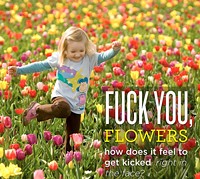 This is just one of those ridiculous Portlandia stories.
Blabby on June 14, 2011 at 5:53 PM Report this