FBI Teaches "Muslims are Violent": At the FBI training ground in Quantico, agents are shown a chart saying that the more devout a Muslim is, the more likely he is to be violent. Problems. Large ones.

Unmetaphorical Witchhunt: In Africa, women are still driven from their homes after accusations of witchcraft.

Mexican Standoff: The mayor of a small Mexico town issues a call to arms for citizens to take up weapons against the drug cartels.

Bird Holocaust: How can we make those shiny glass condos bird friendly?

Is Rick Perry Pro-Life? As in, will he spare the life of a Texas Death Row inmate who seems to be wrongfully convicted?

No Canz Read: SAT reading scores are at a new low.

Big Surprise: The new book that digs up dirt on Sarah Palin? Thinly sourced and not that good.

This Lady is Awesome: A Texas performance artist enters an American Apparel "plus size model contest" as a spoof to protest the company ignoring non-Twiggy ladies till now. And then she won! Here are her winning pics: 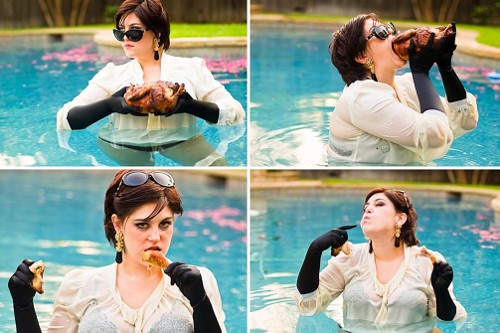 Hip Hop High: How did a planned arts charter school spend $450,000 before it fell apart the week prior to opening day?

Comments 10
Tags: News Blogs
If you enjoy articles like this, please help the Mercury continue our mission of providing up-to-the-minute information, progressive journalism, and fun things to do in Portland by making a small recurring monthly contribution. Never forget: Your help is essential and very much appreciated!
CONTRIBUTE NOW