Since posting "Whatever"—a portrait of presidential hopeful Donald Trump she painted using her own menses—to her Facebook page on Saturday, September 12, Portland artist Sarah Levy has been called "mentally ill," a "bitch," and "a fucking disgusting cunt pig" by online trolls.

She's also been called "courageous," a "genius," and "hero" by people who realize that her idea, her message, and her art is brilliant.

Levy got the idea in August after learning about Trump's comment following the first GOP debate where he said Fox News Channel anchor Megyn Kelly, who moderated the debate and had the gall to call him out on his history of offensive statements about women, had "blood coming out of her eyes, blood coming out of her wherever."

"I had just come home from art class and I was bleeding," she says of the idea. "I posted on my Facebook page asking if it was a bad idea to do it and almost all my friends said to do it."

And so she did. Using a Diva Cup, Levy collected her menstrual blood, watered it down, and painted Trump making the most Trump face ever.

She started drawing about two years ago and says her usual medium is charcoal. Her art usually looks like this: 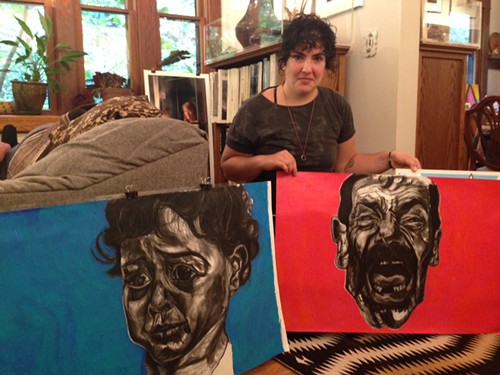 Levy says her friend Anand Gopal sent a photo of the painting, now known affectionately as "Bloody Trump," to Buzzfeed and, since then, the story's been picked up from news outlets from the Washington Post to Huffington Post to TMZ.

Her favorite comment so far? This gem: "Why don't you make a portrait of Bernie Sanders out of your own orgasms. If you're successful, you can sell it to an organization that sells body parts of dead babies."

The best headline in a news story refers to the medium as "Cooter Blood," Levy says. The most shocking part has been the anti-semitic comments she's received on her Wordpress site. She was also surprised that Facebook made her remove the image because it violated their "no nudity" policy. I'm not kidding.

I asked her for her thoughts on why the portrait caused such a stir.

"I think there's so much anger around Donald Trump," she says. "Women are feeling sorta pissed off and demoralized that he's getting so much air time. I think this is a way for women to poke fun at him for some other reason besides his awful toupée."

Levy had prints of "Whatever" made and is selling them on Etsy for $20 each. She is going to donate the proceeds to one or more immigrant relief groups, though she hasn't yet decided which. She's also contemplating getting t-shirts made and has a Twitter feed.

She worked as a journalist overseas (here's a piece she wrote after sneaking into a weapons expo) and her artwork is largely political. Levy says she's inspired by Molly Crabapple's work and hopes to continue to make art that "pulls people in and teaches them about important issues that are happening in the world."

She's planning on auctioning the original painting, which is currently on display in her dad's Southwest Portland home, where we did the interview. For his part, Levy's dad, Stu Levy, says he's proud of her.

"I think she should hold out for the cover of Rolling Stone," he quipped.

Comments 2
Tags: News Blogs
If you enjoy articles like this, please help the Mercury continue our mission of providing up-to-the-minute information, progressive journalism, and fun things to do in Portland by making a small recurring monthly contribution. Never forget: Your help is essential and very much appreciated!
CONTRIBUTE NOW