And That Might Mean One Less Sweet Swimming Spot

IN SEPTEMBER 2009, a clutch of former Trail Blazers players and city officials gathered solemnly on the east bank of the Willamette River, in the shadows of the Rose Garden, to remember a Blazers great.

Standout center Kevin Duckworth had died suddenly the year before, and Rip City, after some consideration, had landed on a fitting remembrance: We'd dedicate an existing public dock to Duckworth—"Duck" to his friends—who had a well-known affinity for boats and fishing.

"We will all enjoy it and walk by here and think of you often," former Blazers point guard Terry Porter said at the dedication. And today, hundreds of people each week do walk, jog, and bike by the L-shaped Kevin J. Duckworth Memorial Dock—300 feet of prime riverfront space off the Eastbank Esplanade, just south of the Steel Bridge.

But Duck's dock might be swimming downstream. The Portland Bureau of Transportation (PBOT) is sick of managing it, and state officials are seriously considering a proposal to move it from its home of the last two decades. They're mulling a request from international trucking giant Daimler Trucks North America, which wants to put the million-dollar, city-owned dock adjacent to its Swan Island headquarters as a boon to employees.

Six-and-a-half years after that riverside dedication, the city's all ears. The dock has seen far less use in the last two decades than officials had hoped. What was envisioned as a bustling entry point to the Rose Quarter and downtown—complete with frequent water taxi service—has instead sat vacant, or been a magnet for live-aboard boaters city officials deem a nuisance.

But Daimler's request also comes as Duckworth's dock is about to get a new lease on life. In the nearly 20 years since it was built, the structure's been off-limits to anyone but boaters—part of a restrictive deal the city inked with the Oregon State Marine Board in 1997, in exchange for $580,000 in funding to build and permit the thing. That deal's currently slated to expire next year, meaning the city will soon have a lot more leeway in how it uses one of Portland's few public downtown docks. 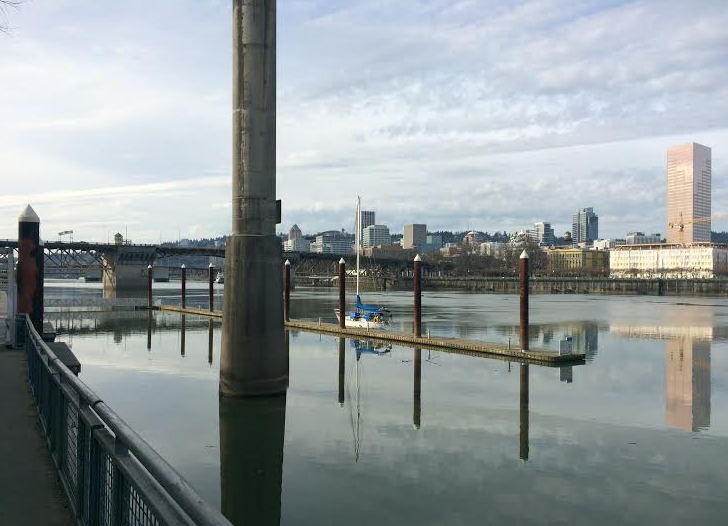 "When I first saw it I was like, 'boom,'" says the Human Access Project's Willie Levenson, who tirelessly promotes the Willamette as the city's secret swimming hole (he also owns a local swimwear shop). "There are basically no safe places to swim in the inner downtown core."

To become a premier waterfront amenity, the Duckworth dock only needs ladders to allow swimmers to clamber from the water, Levenson argues.

You don't have to look far to see proof this might work. The so-called Holman Dock just south of the Hawthorne Bridge's east end is swarmed by swimmers, sunbathers, dragon boat racers, and others during the summer months. More than four years after the Big Pipe Project largely eliminated sewer overflows into the river, Portlanders are growing accustomed to thinking of the Willamette less as a cesspool, and more like a regular pool.

But the Holman Dock is frequently overrun, and won't be around forever. The city's already planning to remove it for roughly two months this summer to make way for pollution capping on the adjacent riverbed. And even when it comes back, the Portland Development Commission, which controls the dock, views it as temporary.

For Levenson and others, the Duckworth Dock is an obvious choice for downtown public river access going forward.

"The purpose of removing a dock that provides general access to downtown is the real question here," Gabrielle Dowding, vice commodore of the Sauvie Island Yacht Club, wrote in an email to the marine board in February. "If anything, the Duckworth Dock should be maintained, and an additional public dock should be created at the proposed new site."

A public notice issued by the five-member marine board last month offers most of the salient details of the proposal to relocate the Duckworth 2.75 miles downstream. The notice mentions PBOT's failed dreams of water taxi service and "recreational boaters cruising in to watch a Trailblazer [sic] game," and that the bureau wants to turn over control to Portland Parks and Recreation.

It says that in recent years dock use "has become problematic," with transient boaters staying longer than allowed (that resulted in a 2014 law change that prohibits mooring at the Duckworth overnight most of the year).

And the notice points out that it's the City of Portland requesting the board's approval of the move—to an expanse of river just off Swan Island, very near the North Portland Greenway Trail.

What's not mentioned is that that proposal first came from Daimler, which sees an upside to having an expansive dock—worth at least $1 million, according to one estimate—near its Swan Island headquarters. The company's proposed a public-private partnership, saying it will pay for security to staff the dock.

"They would like a dock for their employees and to activate the area," says Andy Jansky, the lead engineer on the Eastbank Esplanade, who's been hired by Daimler to help with the dock relocation. Even without that paycheck, Jansky says, he supports the move. "I've felt strongly that it needs to have people using it and be an integral part of our waterfront public dock network.'

In fact, no one can say for sure whether moving the dock to a path far more remote than the bustling esplanade would result in more use. Daimler stops short of making that claim, saying only that it and other Swan Island companies want to improve the area.

And recreational boaters, like Dowding, have told the marine board they wouldn't be more likely to use the dock if it's near Swan Island. That's partly because the waters around the island can take a toll on boats, just like at the dock's current location. They're heavily trafficked and wavy, meaning expensive vessels get jostled against the dock. As Ashley Massey, a spokesperson for the Oregon State Marine Board, notes: "It is unlikely that boaters would spend a significant amount of time at the dock or stay overnight since the dock is not protected from the main channel and would be subject to wake impacts."

With that being the case, speculation has run rampant about the push to move the dock. One theory is that Daimler wants to use it as an airport of sorts, ferrying business officials down from Seattle on floatplanes. The company says it hasn't talked about that.

"Without discussion within [Daimler] we can't say that it wouldn't be an interest sometime in the future," Daimler Buildings and Properties Manager Matt Markstaller wrote in an email.

All of this is still up in the air. The marine board plans to decide whether to move the Duckworth Dock in a public hearing on March 29. When it does, it's likely people like boater and Blazers fan Reggie Steen will be on hand.

"It's not just a dock, it's a memorial," says Steen, 73, who spoke out at a recent public hearing on the matter. "You don't just dig up graves and relocate them."

Comments 3
Tags: News Dirk VanderHart
If you enjoy articles like this, please help the Mercury continue our mission of providing up-to-the-minute information, progressive journalism, and fun things to do in Portland by making a small recurring monthly contribution. Never forget: Your help is essential and very much appreciated!
CONTRIBUTE NOW