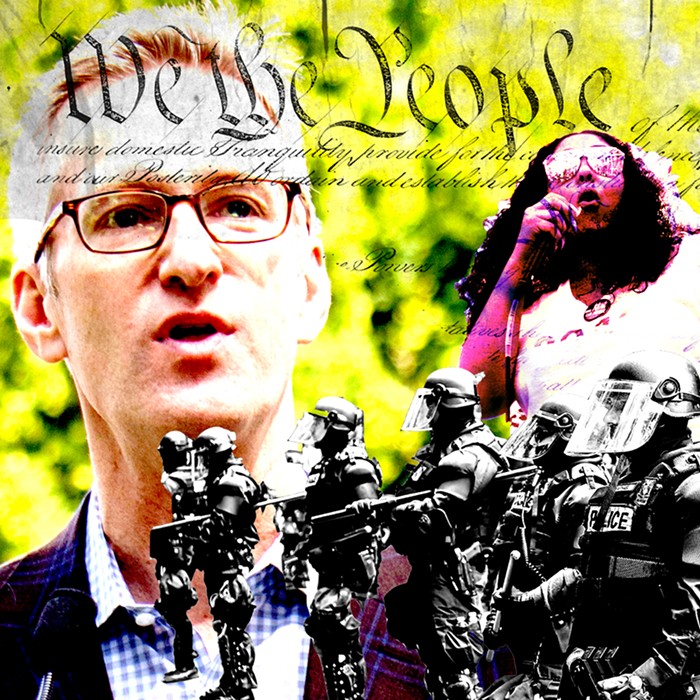 On Wednesday, November 14, Portland City Council refused to pass an emergency ordinance meant to curb potentially violent protests. The policy, penned by Mayor Ted Wheeler, would have allowed the city to restrict the location and time of two opposing protests if the two groups involved have a history of violence against each other and don’t have a city permit to hold a demonstration.

Three days later, two groups with a history of violence against each other held rallies at the same time in downtown Portland. Patriot Prayer, the alt-right extremist group based in Vancouver, Washington, came to decry the #MeToo movement, while members of Rose City Antifa joined other progressive groups in countering Patriot Prayer’s sexist rhetoric. To keep the dueling groups separated, officers with the Portland Police Bureau (PPB) used a number of existing city ordinances to restrict the location and duration of both protests.

For those in attendance, it seemed like the new rules Wheeler had proposed were already at PPB’s disposal.

“If the police can already limit our movement during a protest, what’s the point?” said a counter-protester, who asked to remain anonymous. “Why go through all of that?”

That’s a question Portlanders both inside and out of city council chambers can’t answer. It’s unclear what drove Wheeler to rush a seemingly redundant ordinance that may have done little to deter violent protests—particularly when that ordinance was so vaguely phrased as to all but guarantee a lawsuit.

Perhaps it was the unwanted attention from national media outlets that have accused Wheeler of allowing “vicious mobs” to protest in Portland, or the pressure Wheeler’s under from the Portland Business Alliance to keep downtown Portland tidy and appealing for holiday shoppers.

Regardless of Wheeler’s motivation, there’s still no sign that Patriot Prayer—the group that has organized nearly every recent Portland rally that has turned violent—will stop using Portland as a stage for its hateful rallies. Now that the dust has settled over Wheeler’s rejected ordinance, the city is left with a new question: What now?

The weeks leading up to the November 14 council vote were messy. Constitutional lawyers and city officials doubted the constitutionality of the rushed ordinance, saying it would have a chilling effect on peaceful protesters. During the one public hearing on the proposal, members of the public questioned Wheeler’s sense of urgency.

“I would hope you take in all the testimony today and slow this way, way, way down,” said Commissioner-elect Jo Ann Hardesty, who testified during the hearing.

“With a policy that tells people how, where, and when they can protest, the community must be engaged in forming a proposal. This did not happen.” —Commissioner Amanda Fritz

Mat dos Santos, the legal director of ACLU of Oregon, argued that Wheeler’s ordinance went beyond current city laws to unfairly restrict protesters’ First Amendment rights—and would land the city in court. In response, Wheeler found a Washington, DC lawyer to defend his ordinance, tweeting that his lawyer had a “higher profile” and was more successful than dos Santos.

“The personal call-outs were perplexing to me,” said dos Santos. “They certainly don’t make it easier for us to work with the city on these kind of issues. It can’t be the case that just because [the city] doesn’t like criticism, we get shut out of these conversations.”

Dos Santos said the entire process felt oddly elusive. None of Portland’s civil rights groups were told about the proposed ordinance until Wheeler publicly announced it at a press conference that they weren’t invited to. (The Portland Business Alliance, however, did get an invite.)

“Maybe it was an earnest mistake, an oversight,” said dos Santos. “But in order to have meaningful input from community organizations, we need to have time to meet with the city before it’s proposed.”

Commissioner Amanda Fritz, one of the three city commissioners who voted down Wheeler’s ordinance, raised similar concerns before the council vote.

“With a policy that tells people how, where, and when they can protest, the community must be engaged in forming a proposal,” Fritz said. “This did not happen. The ordinance should not be the starting point for these conversations.”

Wheeler’s clumsy offensive, however, may have helped accelerate those conversations.

“The city has been stuck in first gear on this conversation for a long time,” said Sonia Schmanski, chief of staff for Commissioner Nick Fish. “The mayor did a valuable thing by shaking things loose. Sometimes you need to do that to move forward.”

Schmanski has attended countless city council meetings in her 10 years working with Fish. But when commissioners explained their votes before nixing Wheeler’s ordinance, she was taken by surprise.

“I was struck that everyone’s comments authentically reflected their voice and their values,” Schmanski said. “It was a very frank and honest conversation. You can churn on an issue for several years and never see that.”

For Bobbin Singh, the director of the Oregon Justice Resource Center (OJRC), the vote brought needed clarity on how the city regards groups like Patriot Prayer. On the day of the vote, every member of city council acknowledged that alt-right extremists are dangerous and need to be better addressed by the council.

“On the whole, this was a tremendously positive and historic outcome,” said Singh. “We had a city council meeting that wasn’t about whether the alt-right and Patriot Prayer are problematic, but whether the city’s using the right tactics to counter them. I think that’s a win.”

Prior to the council vote, OJRC partnered with the Western States Center, a civil rights advocacy group, and the Oregon chapter of the Council on American–Islamic Relations to craft an alternative to Wheeler’s ordinance—one that could deter violent protests in a more constitutional and collaborative way. The plan suggests the city hold a symposium for city officials and media about right-wing extremism and hate groups, and encouraged similar training for PPB officers.

Singh is hopeful that members of city council will continue to pursue alternative ways to counter Patriot Prayer’s disruptive visits without limiting free speech. But before moving forward, Singh hopes Wheeler takes a moment to look back.

“I think it is incumbent on the mayor and his staff to reflect on how this all went down,” Singh said. “Was it a success? Was it a failure? Is this what you wanted?”