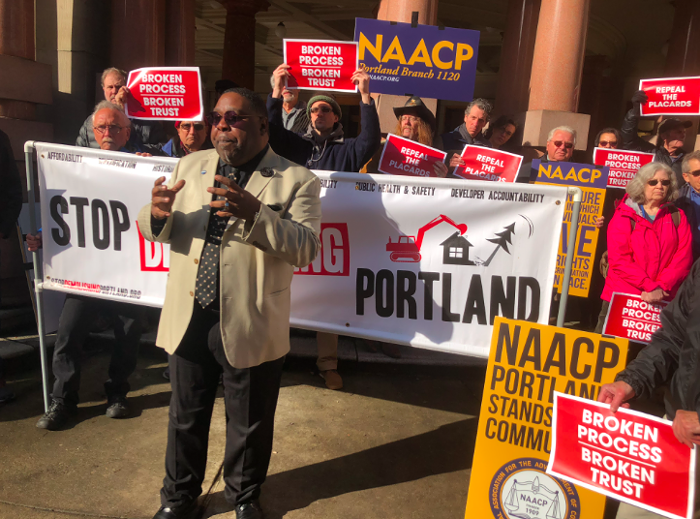 E.D. Mondaine, president of Portland’s NAACP chapter, speaks at a rally outside Portland City Hall Wednesday morning. BLAIR STENVICK
The Portland City Council is considering amending a controversial ordinance that requires owners of unreinforced brick buildings to label them as earthquake-unsafe. But, an NAACP-led coalition that opposes the ordinance is making it clear that those changes wouldn’t be enough to ease their concerns.

At a city council meeting Wednesday morning, commissioners debated an ordinance proposed by Commissioner Jo Ann Hardesty, which would make changes to an original ordinance passed by the council last October. The original ordinance requires owners of unreinforced masonry buildings (URMs) to display a sign declaring them unsafe in the event of an earthquake—and to file an agreement with the county recorder’s office, placing a mark on their property titles that could make it difficult for them to receive financing to make structural improvements.

URM owners would be able to remove the placards only after making costly improvements to their buildings. URM owners the Mercury has spoken with have cited estimates for those improvements ranging in the hundreds of thousands for single-story buildings, and up to $1.5 million for a multi-story building.

Hardesty’s suggested changes would eliminate the requirement to file an agreement with the recorder’s office, and would push back the enforcement date for privately owned URMs to November 2020 (city-owned URMs are already complying with the ordinance, which was originally slated to go into effect in March). Those changes come a week after a federal judge ordered the city to suspend the ordinance for 60 days, while a lawsuit between a group of URM owners and the city plays out in court.

A coalition including Portland’s NAACP chapter, Music Portland, Portland Tenants United, and other local groups held a rally outside city hall while the meeting was in session. Many of Portland’s URMs are Black-owned businesses and independently owned music venues. Coalition members said they aren’t satisfied with Hardesty’s proposed changes, and want to see the URM ordinance overturned altogether.

“We can talk about technical jargon, we can tell you why it’s madness,” said E.D. Mondaine, president of Portland’s NAACP chapter, at the rally. “We can look at the process and prove how unfair it is. But at this junction, at this stage of the game, what’s better is that this process is stopped, and we repeal the ordinance.”

Inside council chambers, Mayor Ted Wheeler and Commissioner Nick Fish clashed over whether the proposed changes were necessary. Wheeler maintained that the ordinance and agreement as is wouldn’t actually place a lien or encumbrance (limitations on a property’s title that can devalue property and make financers wary to lend money) on URMs, while Fish said that real estate experts he’s spoken with believe it would.

Both Fish and Commissioner Chloe Eudaly abstained from voting on the original ordinance in October.

“Our current mandate risks leading to significant demolition of historic buildings and significant inequity, changing the very character of our city,” Fish said at Wednesday’s meeting.

Wheeler said that despite not believing the ordinance would place an encumbrance on URM titles—he called that idea an “urban legend” at a press conference Tuesday—he is open to making Hardesty’s proposed changes, and expects the new ordinance will pass a council vote next week.

“What makes this issue so challenging is that it is pitting a life safety threat against other really important values in this community,” Wheeler said. “We have to figure out where is this right balance between acknowledging the importance of those values but understanding that what has changed in recent years is the identification of an actual threat to life and safety.”

Wheeler also brought up House Bill 2208 in the Oregon Legislature, which would set up a fund to help URM owners pay for needed improvements. There are about 10,000 URMs in Oregon, and about 1,600 in Portland.

“We need to ensure buildings aren’t just here for today but for future generations,” Wheeler said. “This is when we really, really need you to call your legislator.”

In addition to introducing the new ordinance, Hardesty’s office is setting up a new community committee to discuss URM policy changes. She said she hopes to involve those who would be most affected by the ordinance—URM owners—moving forward.

"An earthquake would be a terrible way to lose your building,” Hardesty said. “No one wants that. But many Portlanders are also worried that they will be displaced by economic forces before the earthquake hits. My goals is to slow down the enforcement placard rules.”

Both Eudaly and Commissioner Amanda Fritz were absent from Wednesday’s meeting. The council will vote on the new ordinance next Wednesday, Feb 27.