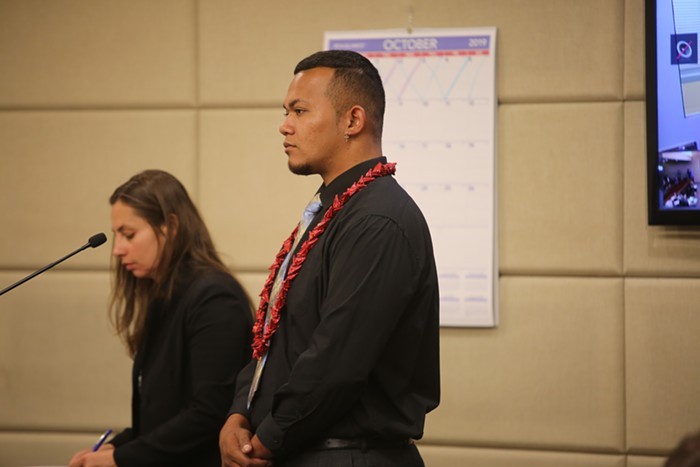 Toese at his October 2019 arraignment hearing.
A member of the Proud Boys, a national alt-right group, pled guilty Tuesday to assaulting a Portland man in June 2018 on a Northeast Portland sidewalk.

Tusitala "Tiny" Toese, 23, was accused of punching Portlander Tim Ledwith on June 8, 2018, with the assistance of fellow Proud Boy Donovon Flippo. According to court testimony, both men had been in a truck yelling homophobic and pro-Trump statements when they passed Ledwith, who was walking on the sidewalk. Ledwith cursed at them, prompting the truck's driver to pull over and let Flippo and Toese hop out and assault Ledwith.

While Flippo pled guilty and served eight days in jail for his assault charges, Toese maintained his innocence. On October 7, 2019, Toese pled not guilty to two assault charges—one a misdemeanor and the other a felony.

At a Tuesday hearing, Toese agreed to plead guilty to the misdemeanor charge in exchange for Circuit Court Judge Kathleen Dailey dropping the felony charge. Dailey also sentenced Toese to 80 hours of community service and banned him from protesting in Multnomah County for two years. Up until his arrest, Toese played a leading role in violent Portland protests organized by Patriot Prayer, a far-right activist organization based in Vancouver, WA. Prior to the 2018 assault, Toese was arrested for harassing protesters during a 2017 rally.

"I apologize... to all the parties involved," Toese told Dailey.

Ledwith had participated in protests opposing Patriot Prayer's rhetoric with members of Portland's anti-fascist (or, antifa) community. He appeared in court Tuesday to read a victim impact statement.

Ledwith said that since his 2018 assault, he's witnessed an "escalation in behavior" from the men who assaulted him. He also expressed support for the plea agreement.

"I oppose prison," Ledwith said, "so I would never advocate for more than what happened today."

Dailey used the opportunity to call for more compassion and empathy between people with different political ideologies—especially those who turn to violence to settle an argument.

"Whenever violence happens, it's an instance of people not having their needs met," said Dailey, addressing both Toese and Ledwith. "Perhaps you've come to a place where you can understand that violence will never get you what you want in this world."