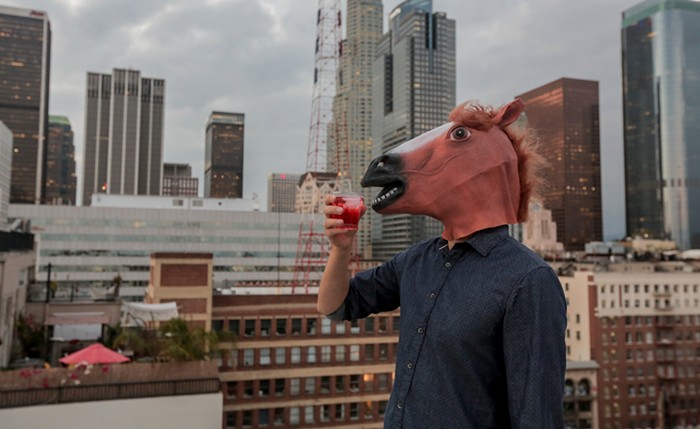 "One cranberry vodka with just a whole ton of vodka, please." DutcherAerials
Good Afternoon, Portland! I see you winding down your day, getting ready to go out and forget the week's worries. Just READ THIS NEWS AND YOU'RE DONE—YOU'RE FLIPPIN DONE.

• If you're ever dawg-gone-disappointed that speed limit laws aren't enforced much in Portland, you may be interested in House Bill 4105, which legislators passed today. Once Governor Kate Brown signs it, the city will be able to expand its number of traffic cameras. The bill also frees up police time, allowing trained city employees to review camera photos and issue citations, instead of restricting the duty to sworn officers.

• New Coalition Alert: A group of homeless service providers are calling on leaders and the community to take a "3,000 Challenge"—to house 3,000 people by the end of 2022. The number is a reference to a draft proposal penned by Wheeler aide Sam Adams that suggested relocating unhoused Portlanders into three 1,000-person shelters.

• Are you READY to see that Bat Boi work it up and down Gotham's metaphorical stripper pole? Jas Keimig has a review measuring all the sulky and emo moments The Batman has on offer.

This week we unveiled our unapologetically optimistic, drum-banging collection of local art profiles and previews. It's a pump-up jam, but our love for these projects is real.https://t.co/8e7wybVq1e
— Portland Mercury 🗞 (@portlandmercury) March 4, 2022

• While the world is glued to updates about Russia's invasion of Ukraine, it's hard to say what people living in Russian can actually see about the conflict. Yesterday, two of the country's last news voices that openly criticized the government, Echo of Moscow and TV Rain, closed up shop. Today Russia's internet regulator shut down the country's access to Facebook.

• Traffic IS UP on Nukemap, a nuclear fallout visualizer. The people are curious: Just how much fallout would get on me and mine? In—oh, I don't know—the event that the world were plunged into nuclear war. JUST ASKING! Reroute your nerves with this soothingly wonk interview with Nukemap creator Alex Wellerstein.

• Apple bottom Jeans! SNAKES WITH THE FUR (With the fur!!) The whole world is looking at Thailand like, thank goodness for something weird. I just need a minute with this snake, and I don't even like snakes.

• Have a good weekend, Portland!

I'm just like the tiredest I've ever been in my life pic.twitter.com/76AZ2uWGL9
— I think you should leave turbo team (@ITYSL) February 24, 2022