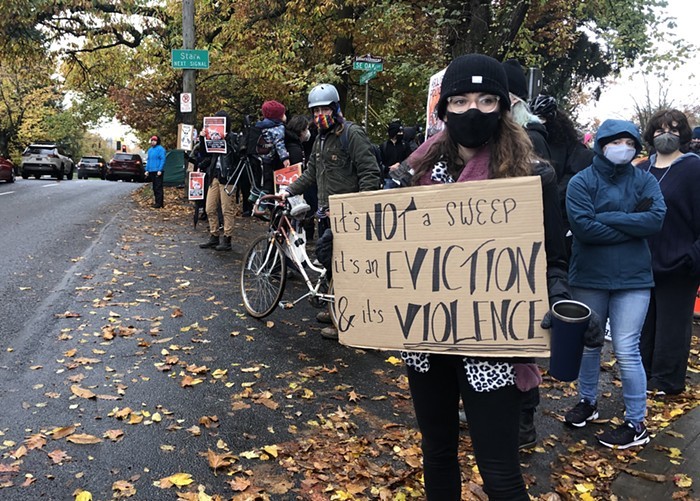 Protesters standing at the entrance of the SE Oak encampment in 2020. Alex Zielinski
Good Afternoon, Portland! You see you're searchin' for somebody that'll take you out and do you right. Well, come here AND LET DADDY TELL YOU ABOUT THE NEWS.

• A local bill, introduced on March 25 by lobbyist group People for Portland, has been rejected. The measure sought to repurpose 75 percent of funds raised by an approved 2020 ballot measure and funnel them towards temporary homeless shelters. It also suggested restricting those funds from municipalities that did not sweep homeless camps. If that sounds wild, there was MORE.

• The Starbucks at 28th and Powell is one of four Starbucks stores in Portland set to hold a union vote later this month. Barring a dramatic twist in the next several weeks, store representatives say the election won’t even be close.

• From the Rontoms’ super solid renewed run of Sunday Sessions to Pickathon's grand return, Portland may not be at full party mode just yet, but the music tent poles are going back up. This week's Hear in Portland column has all the latest picks for shows and local releases!

• Ahhhhh another Mercury food week is imminent! Starting Monday April 18, the Portland Mercury's Pizza Week makes its long-awaited return. Will you deign on a single or cradle a whole pie? Get a gander at these slices.

• The jury in charge of judging four men accused of plotting to kidnap Michigan Gov. Gretchen Whitmer acquitted two and remain unable to reach verdicts for the two others. The New York Times reports that their decision is a major defeat to the Justice Department's attempt to prosecute domestic terrorism, following the Jan. 6 insurrection.

•“With just one blow, there was simply nothing, no children’s clinic, it was simply blown away, ” Dr. Lyudmila Mykhailenko, told AP reporters in the city of Mariupol, Ukraine. That testimony, the testimony of other witnesses, and footage from the scene contradicts Russian claims that there was no airstrike.

"Reporters confuse their Twitter audience for the actual world."

I feel this has become an even bigger problem during the pandemic, as reporters are less out in the world chatting with sources & interacting with the communities they write about/for. https://t.co/ghWnl4wi7I
— Alex Zielinski (@alex_zee) April 8, 2022

• In WELL, THAT SOUNDS DISPORPORTIONATE news, the motion picture academy has banned Will Smith from attending the Oscars for the next 10 years. Smith will not have to return the Oscar he won for his portrayal of Richard Williams in King Richard. He can continue to be nominated and win awards, in absentia, but he can't attend the ceremony.

• AHOY THERE, STONERS! The SPLIFF Film Festival—featuring short, hilarious, trippy, and FREQUENTLY GENIUS mini-movies made by stoners—is coming to Revolution Hall for one night only on Saturday, April 16! GET THOSE TICKETS NOW!

• Party people, you know you have my support. But you Friday night exhausteds—you have my heart.