Harriet Tubman Middle School students protesting Bryan Chu's suspension on April 6. Adah Crandall
A Portland Public Schools (PPS) teacher is alleging the district placed him on leave in retaliation for speaking out against the district’s plans to relocate Harriet Tubman Middle School due to the expansion of a nearby freeway. His students are calling for his return to the classroom.

Bryan Chu, an 8th grade social studies teacher at Harriet Tubman, was placed on leave April 1 while the district investigates his professional behavior. A letter from the PPS human resources department indicated that Chu is being investigated because of allegations that he swore and yelled at a school board meeting, told a district staff member that she had “failed at her job,” coached students to write letters opposing the Harriet Tubman relocation, and told a student to “shut up.”

Chu, a teacher of more than 20 years, argues that the framing of the incidents described in the letter is incorrect and over-exaggerates the severity of his actions.

“At the end of the day, this is racist retaliation,” said Chu, who’s Asian. “The stuff that [PPS] says, it's not really about that. It's a bigger thing.”

PPS spokesperson Ryan Vandehey said that personnel matters are confidential and did not answer the Mercury’s questions about Chu’s suspension and subsequent allegations against the district.

“We welcome engagement with our employees, families and community members, including a variety of perspectives and opinions,” Vandehey said. “We also take the conduct of our professionals very seriously, and we expect a certain level of decorum in classrooms and in public.”

Harriet Tubman Middle School sits about 50 feet from the Interstate 5 freeway. The school was previously shuttered due to air quality concerns, but reopened in 2018 after PPS spent millions installing HVAC air filters inside the school. While the school most likely has the best indoor air quality of any PPS building, a 2018 study by Portland State University concluded that students should not play outside during high-traffic hours due to the high levels of pollutants coming from the freeway.

Now, the Oregon Department of Transportation (ODOT) is planning on expanding the freeway even closer to the school in an attempt to address traffic congestion on I-5. Early design plans indicate that ODOT plans to move the freeway within 25 feet of the school building.

In response to the freeway expansion, the PPS school board made a resolution to relocate the school on the state’s dime—the Oregon Legislature set aside $120 million for the district to build a new school building during the 2022 session. In order to have students in a new school by the 2026-2027 school year—when planned construction of the freeway will be close enough to the school to disrupt the learning environment—the school board must decide on a new school site by May 1.

Chu has publicly criticized the relocation of Harriet Tubman, arguing that the existing school has the best indoor air quality in the district and the proposed relocation sites are also nearby high-traffic streets. The teacher has also critiqued the district for not involving current Harriet Tubman students in PPS listening sessions and community meetings about the proposed move.

“I'm not opposed to relocation,” Chu said. “What I'm saying is that the district is saying they engaged this community, and they didn’t. They've never interviewed us. They don't care about community or engagement. They're gonna do what they want to do.”

The Thursday before winter break, PPS held community listening sessions at Harriet Tubman Middle School and the nearby MLK Jr. Elementary School—one of the schools that feeds into Harriet Tubman. The Harriet Tubman session was scheduled for 4:30 pm and, according to Chu, only had four attendees. The MLK Jr. session was at 6 pm and was full of parents, staff, and students.

“People had time to get off work, to get their kids fed, get situated, and get to this meeting,” Chu said, arguing that the timing of the Harriet Tubman meeting didn’t allow for actual engagement of the current student body.

During a subsequent meeting with district staff about the school’s relocation, Chu told a district staff member tasked with community outreach that she “failed at [her] job.” 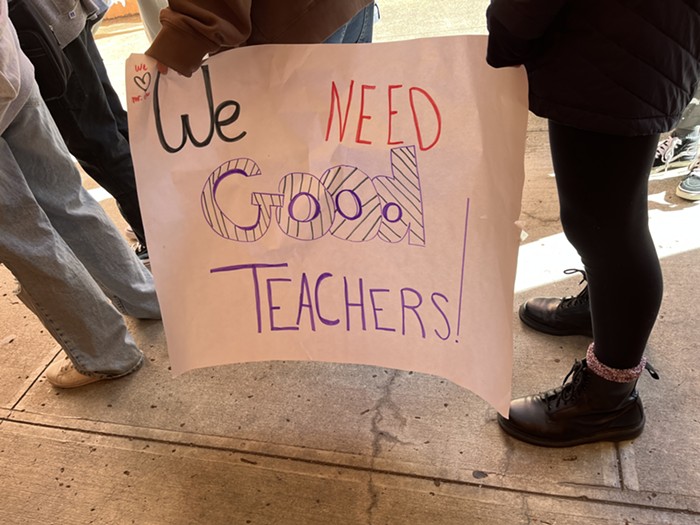 A sign during the student walkout in support of Bryan Chu. Adah Crandall
“It was not a personal attack,” Chu told the Mercury. “I was just stating facts because I’m part of the community that was not engaged.”

Several of Chu’s students said they did not know the district was planning to move Harriet Tubman until Chu told them during class. After learning about the relocation efforts late last year, the students wanted to reach out to the district to provide their input and decided to write letters to the PPS school board members.

“We wanted to make our voices heard because we literally did not know anything about the expansion until [Chu] was like, ‘Hey, you guys know this is happening, right?’” Sonja Seidman, an 8th grader at Harriet Tubman, said. “We were just so pissed because it is going to affect us and our younger siblings.”

According to Radha Wiley-Sood, an 8th grader in Chu’s social studies class, the idea to write letters to the school board about Harriet Tubman’s relocation came from the students.

“He informed us on the structure of the letter, but we’re the ones who came up with all of the words,” Wiley-Sood said.

Chu says that as a social studies teacher, he teaches students how to write business letters and engage with civics. To Chu, giving students the tools they needed to contact the school board was “teaching civics in real time.”

This is not the first time PPS has penalized a teacher for engaging their students in activism. In 2018, the district placed Ockley Green Middle School teacher Chris Riser on indefinite leave after he joined a student-led walkout to commemorate the death of Quanice Hayes, a 17-year-old shot and killed by Portland police. PPS alleged that Riser instigated the walkout, putting students’ lives at risk.

There is a recording of Chu swearing during a February 22 board meeting where dozens of PPS teachers filled the crowd to oppose the district’s latest budget proposal which they believe will cause an increase in class sizes. During a district presentation on how funds were being spent on classroom maintenance and COVID-19 safety resources, Chu yelled from the crowd that the presentation was a lie because teachers had not seen the health and safety investments the district said they were distributing. For example, the district said they were spending money on replacement air filters for each classroom but none of the teachers at the meeting said their air filter had been replaced in the six months since returning to in-person classes.

On a recording of the meeting, Chu can be heard calling the district presentation “bullshit.” Several other teachers started yelling from the crowd and board chair Michelle DePass called for a recess.

Chu also isn’t surprised that someone heard him say “shut up” in his classroom. As students have struggled to return to in-person learning, Chu, Wiley-Sood, and Seidman said that the halls and classes at Harriet Tubman can be chaotic.

“Nobody listens to ‘be quiet’ any more and we’re old enough to not get offended by curse words,” Seidman said.

Chu said it’s not uncommon for students to stay in the halls when they are supposed to be in class or for students who are not in his class to walk in to visit. His “survival philosophy” is to clear students from the hallway into his classroom to make sure they are accounted for and teach. If the group of over 30 pre-teens gets rowdy, Chu sometimes tells them to shut up.

“If you ask somebody a million times to please be quiet and they don't, what do you do?” Chu said. “I don't say it often, but occasionally, I think every teacher has said it.”

Whether it’s calling for more health and safety investments from the district or asking students to stop talking, Chu argues that he’s only resorted to using language the district deems inappropriate when he wasn’t listened to the first time.

“People will be like, ‘You need to change your tone,’” Chu said. “At one point in time, I said it nicely.”

Chu’s students say that his suspension feels like the district taking away a source of comfort at a time of uncertainty, both from the pandemic and proposed relocation of their school.

“It feels really heartbreaking to be honest, because when you have someone who’s such a light in the community and such a leader who engages with the students so much, to have them be taken from you unwillingly is a really hard thing to deal with,” Wiley-Sood said.

Dozens of Harriet Tubman students protested Chu’s suspension Wednesday by walking out of their classes and marching to the nearby PPS district headquarters. The students shared stories of when Chu put on their favorite music when they were having a bad day or gave out Cup-O-Noodles to students who didn’t have lunch. Several students said that Chu’s classroom is a safe space where they feel welcome and comfortable, which creates a more engaging learning environment, according to Seidman.

“In his classes, we get into these conversations that even on Zoom people would talk and that was so rare in online school because people didn't want to talk or show their faces, but he’s so engaging and we were able to have such deep conversations,” Seidman told the Mercury.

Harriet Tubman students said what they ultimately want is transparency from the district on when they can expect Chu back in the classroom, but the district cannot share information about an ongoing personnel investigation because of privacy laws.

Chu maintains that his behavior is not the issue and hopes he will be able to return to his students, especially while they are still struggling with the emotional and behavioral impacts of the pandemic.

“We have tons of subs in the building—our subs need subs,” Chu said. “So the only place where there's some kind of stability and sanctuary and refuge from this friggin crazy year is my class. Why would you disrupt that?”