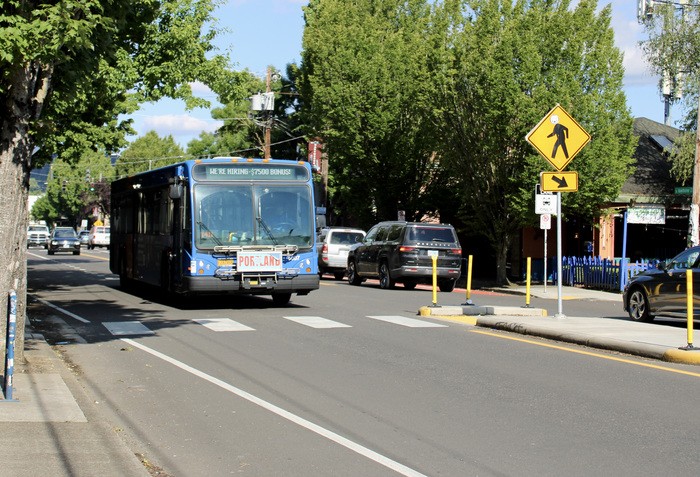 TriMet’s driver shortage has persisted despite hiring efforts. Isabella Garcia
For TriMet commuter Citlalli, a delayed or canceled bus gets in the way of managing the retail store she works at properly.

“If I’m late and the store doesn’t open on time, that’s on me,” Citlalli, who asked to be identified by her first name, told the Mercury.

But getting to work on time has become more of a challenge for transit riders this year after TriMet reduced its service by nine percent in January, citing a severe driver shortage. The service cuts meant that 20 of the agency’s 84 bus lines saw a reduction in service—including line 75, which Citlalli relies on as part of her commute. The reduction in January followed pre-existing pandemic-related service cuts, leaving TriMet operating at approximately 80 percent compared to its pre-pandemic service.

Six months after the additional cuts, the shortage has only gotten worse. Riders told the Mercury that the new reduced service has created longer commute times, unreliable bus transfers, and altered the way they choose to get around the city—if they have a choice.

According to TriMet spokesperson Tia York, TriMet has no plans to restore its service levels in the foreseeable future due to the agency’s ongoing driver shortage.

TriMet needs at least 970 drivers to reasonably sustain its current service level, according to York. She says the agency is currently about 45 bus operators short of that, but if every scheduled driver is available for their shift—and maybe some overtime—TriMet can still stretch its workforce and maintain its service level. However, it’s rare that every driver is available, particularly during a pandemic. On a single day in late May, 188 drivers were out sick or unable to come into work.

When drivers aren’t able to make their scheduled shifts, buses and MAX trains get canceled. TriMet issued an apology on Twitter in May, acknowledging that they had to cancel bus trips daily due to a lack of operators. Throughout April and May, TriMet canceled nearly 900 bus trips and almost 100 MAX trains, according to the Oregonian.

“We hate to see this as much as you hate not seeing your bus or train arrive,” the agency wrote. “We’re working hard to restore the service you need and deserve.”

The agency has doubled down on its hiring efforts this year by increasing the starting wage to $25.24 per hour for operators, adding a $7,500 signing bonus paid out over three years, and hosting mass hiring events. Since January, TriMet has received over 1,130 operator applications. Of those applicants, approximately 300 received conditional offers and about 60 started the seven week training throughout May, according to York.

Hiring drivers to address the existing shortage is just one part of the equation. The transit agency promotes from within, meaning bus operators are promoted to bus supervisors and MAX operators—two essential positions within the agency. Additionally, drivers are still retiring and leaving the profession altogether. Between the small returns from the agency’s hiring efforts and continuous loss of drivers, York said there are too many moving parts to be able to predict when TriMet will be able to rectify its staffing shortage and restore its service to 2021 levels, let alone pre-pandemic levels.

“At this time, we have no plans to restore service based on current hiring,” York said.

For TriMet commuter Billie Antelope, the service cuts have been particularly noticeable on the weekends when she’s trying to go to work. Antelope lives in an East Portland halfway house and uses a combination of the 71, 72, and 75 bus lines to get to and from work. TriMet has aimed to strategically reduce its service by maintaining routes in low income neighborhoods that are more likely to be transit-dependent and buses during peak weekday commute times. But, for people like Antelope who work on the weekends, the reduction in frequency of buses still significantly impacts the way they get to work.

Instead of being able to reliably catch a bus every 15 or 20 minutes, weekend cuts mean Antelope’s usual route offers a bus every hour or more. To still make it to work on time, Antelope and about ten additional people she commutes with have had to add a mile-long walk to a different bus route that maintains a more frequent schedule on the weekend.

For Maia Vásconez-Taylor, an organizer with transit advocacy group Bus Riders United!, the reduction in service has led to outright behavior changes.

“I've noticed that some commutes with transfers are longer than they used to be,” Vásconez-Taylor said in an email to the Mercury. “Sometimes I will decide not to go out simply because seeing the time of the longer commute deters me.”

On May 25, TriMet’s Board of Directors voted to adopt the nine percent reduction in service—an acknowledgement that the agency wasn’t able to restore service within 180 days of the temporary order in January.