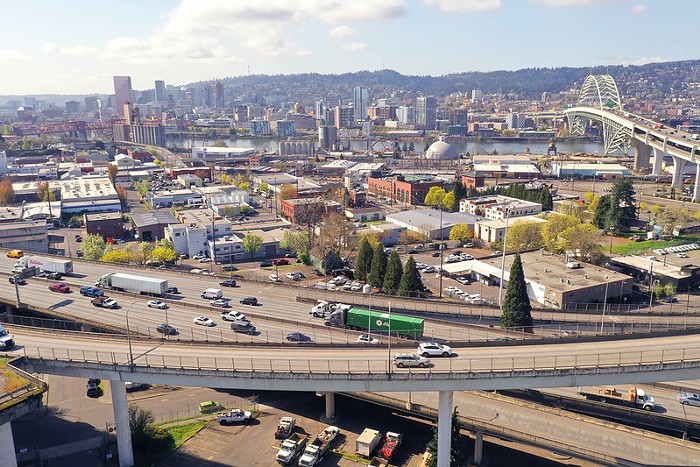 The city of Portland is poised to officially rejoin the Rose Quarter Interstate 5 project after walking away in 2020 due to a lack of trust in the Oregon Department of Transportation’s (ODOT) partnership. While the Portland City Council’s trust in ODOT has not been fully restored, the city is leveraging its essential participation in the project to add restorative justice values to the freeway design, which originally displaced Portland’s Black community.

“The Black community bore the burdens of this highway and the city’s failed urban renewal efforts in this area,” Commissioner Jo Ann Hardesty said during a city council meeting Wednesday. “If ODOT breaks their promises again, this agreement makes it clear that the city will walk away.”

The Rose Quarter Improvement Project (RQIP) is the state transportation department’s plan to address congestion on the I-5 corridor by adding additional merging lanes to the section of the freeway that runs through the Rose Quarter. After significant advocacy efforts from the community surrounding the project area in the early 2010s, ODOT agreed to also use the project as a way to return land to the Albina neighborhood—the historically Black neighborhood that was partially razed to build the original I-5 corridor in the 1960s. The original construction of the interstate destroyed 300 Black-owned homes and businesses, taking approximately $1 billion in modern day wealth away from those families.

When Governor Kate Brown mandated the freeway congestion be addressed in 2017, Portland officials believed ODOT was in agreement that the project should address the congestion issues while aiming to undo the harm the original freeway construction caused to Portland’s Black community.

As the project moved forward, however, Portland leaders and community stakeholders said ODOT was resistant to actually investing in revitalizing the historically Black neighborhood surrounding the freeway, despite promising that the project would include restorative justice investments.

“[The city’s support was] contingent on the promise that the Rose Quarter Project would reconnect the neighborhood,” Hardesty said. “Time and again, ODOT went back on its promise.”

A key part of the restorative justice aspect of the project proposed by city partners were large concrete covers that would dome over the freeway and be substantial enough to build on top of. The covers were intended to be a way for the state to literally return the land they took for the freeway back to the community by building city blocks on top of the corridor. During the planning of the project, city officials believed ODOT was reluctant to commit funding to the freeway covers and resisted input from Albina Vision Trust (AVT)—a nonprofit that is spearheading the effort to redevelop the Albina neighborhood. ODOT also declined to conduct an environmental impact statement—a rigorous study of how the project would affect the surrounding environment—for the project, opting for a less intensive assessment despite concerns from environmental activists.

In June 2020, AVT decided to end its participation in the project, citing ODOT’s poor partnership. Following the organization’s exit from the project, then-Transportation Commissioner Chloe Eudaly left the project’s executive committee and Mayor Ted Wheeler pulled his support for the project as well.

“At every step, I have asked ODOT for specific goals to be met around climate, community, and economic development,” Wheeler tweeted in June 2020. “Those goals have not been met. Therefore, I am withdrawing my support for the I-5 Rose Quarter Project.”

The move was unprecedented—the city had never walked away from a major transportation project in modern history. However, Portland’s participation was, and still is, essential to the RQIP due to the city’s ownership of the surrounding project area and Brown’s mandate that the I-5 bottleneck be addressed.

Since walking away from the project in 2020, Portland officials have opted to work with Brown directly instead of ODOT. As a result of Brown’s oversight, ODOT has agreed to include an eight-acre freeway cover over the top of the project. The cover is being designed to dome over the freeway and reconnect the city street grid, while also being able to support multi-story buildings.

The covers, and specifically what’s built on them, are a cornerstone of AVT’s plan for the redevelopment of Albina.

During a work session last week, AVT director Winta Yohannes presented the organization’s vision for what the Albina neighborhood could look like in 2050 to the city council. The plans envision a neighborhood with several public parks and greenspaces, a mix of over 2,000 units of low- to high-density affordable housing, and opportunities for commercial and entrepreneur investments. The plans were developed from input of Albina residents and Black Portlanders who told AVT that they want the neighborhood to provide access to nature, opportunities for wealth building within the Black community, and a strong sense of community. 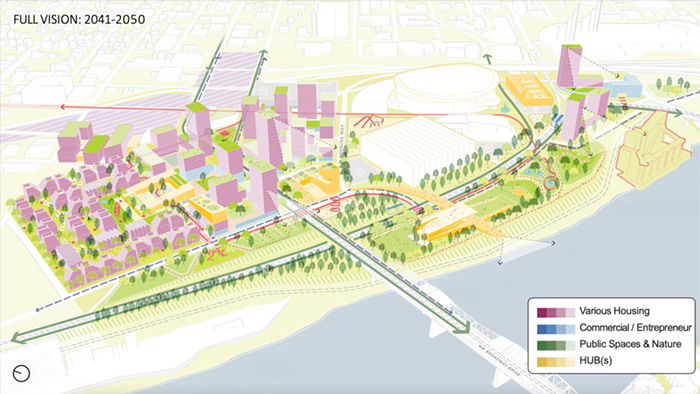 A rendering of AVT's plan for the Albina neighborhood. Albina Vision Trust

The project would be a massive undertaking that would require collaboration from seemingly every city bureau. Phase one of the redevelopment efforts would include building a waterfront park, housing, and—pending the city’s return to the RQIP—commercial and housing development on top of the freeway covers.

During the meeting, Wheeler indicated his support for AVT’s plan and asked the organization to start collaborating with city staff to develop work plans that map out what executing the project will actually look like. In the immediate future, Yohannes asked for the city council’s support in making current decisions that align with AVT’s long term project.

“Our collaboration on the ongoing I-5 project will be critically important,” Yohannes told the council. “More than anything, we need your sharp elbows when needed to protect the district.”

Those sharp elbows are present in the city’s proposed governmental agreement with ODOT to return to the project.

The agreement outlines the city’s expectations that ODOT will treat Portland as a collaborative partner in the planning and design process by having city and state staff work together, as well as providing the city council with updates throughout the design process. The agreement also requires the project to not adversely affect the city in any way, whether it’s pedestrian and bicycle infrastructure, health and safety, or equity within the city. If Portland officials believe ODOT is not meeting any one of those requirements, the city reserves the right to walk away again, which would effectively stall the project.

While the city returning to the project has been widely praised as a positive sign by various stakeholders, environmental advocates are displeased that the proposed city agreement didn’t also require ODOT to implement congestion-related tolling on the freeway corridor before building any additional lanes. While ODOT is planning to eventually introduce tolling to the I-5 corridor, the tolling will begin after the freeway has already been expanded to fit more cars, which environmental activists say will increase carbon emissions in Portland. While the city’s proposed agreement to rejoin the project includes a condition that requires the RQIP to contribute to reducing the city’s carbon footprint and not adversely affect the city’s environment, opponents of the freeway project say that’s not enough.

“We are celebrating the achievement of our friends at Albina Vision […] at this important opportunity to reconnect Albina, but we’re mourning a missed opportunity on climate,” said Chris Smith, co-founder of environmental group No More Freeways, during the Wednesday council meeting. “What’s happened here is that we’ve allowed climate justice to be pitted against racial justice.”

City Commissioner Mingus Mapps also raised concerns with the environmental impact of the project, noting how many concerned emails he had received on the subject from constituents. Wednesday’s meeting was the first reading of the proposed agreement for the project, so council still has time to amend the agreement before voting on it.

The city will hold a second reading and vote on the agreement on a later council date that has yet to be scheduled.