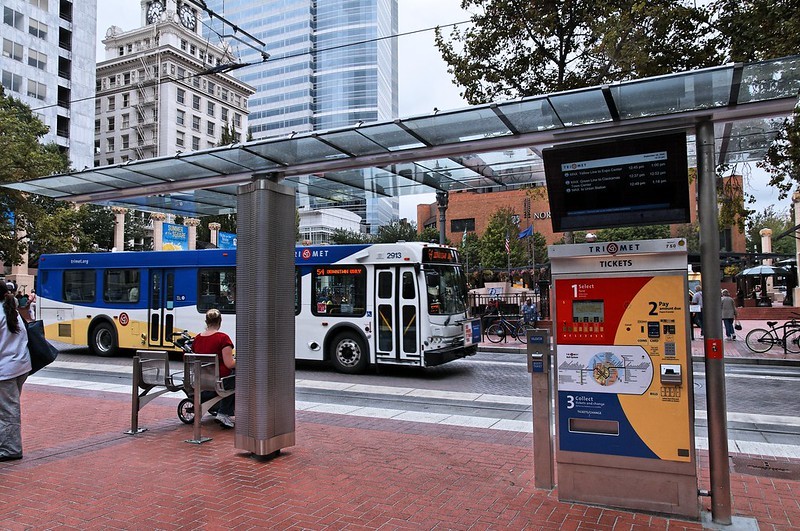 On July 27, TriMet sent a memo to employees titled “What to Know About Drug Inhalation on System” that noted the surge of fentanyl use in Oregon over the past three years. Fentanyl is a synthetic opioid that is 50 to 100 times more potent than heroin and significantly cheaper to produce. Health experts believe that increased access to fentanyl has contributed to the 41 percent increase in overdose deaths in Oregon over the past year—nationally, overdose deaths climbed 16 percent in the same time period.

According to the internal agency memo that was shared with the Mercury, the increase in fentanyl use has led to more frequent use of drugs in public spaces, including on and around TriMet buses and trains. Employees have been “understandably concerned about how exposure to smoke from this drug use may affect their health and ability to pass drug tests,” according to the memo, so TriMet has made two changes—a new policy to air out buses and an increased frequency of transit police “enforcement missions.”

“The increase in drug use in the communities TriMet serves is concerning, and it’s led to some issues on and near our transit system,” said TriMet spokesperson Tyler Graf. “We’ve instituted a new policy where, if an operator detects smoke or learns of odors that are concerning riders, they’ll stop the train to let riders off and air out the inside of the vehicle.”

According to TriMet spokesperson Roberta Altstadt, the agency wants to increase the number of transit police officers on the TriMet system to handle a variety of "nuisances," not just drug use. While the agency has a budget for 64 security officers, only 21 of those positions are currently filled.

The health risks of being exposed to secondhand fentanyl smoke are low. A study by the US Center for Disease Control and Prevention—which is cited in the TriMet memo—found that exposure to fentanyl smoke creates little to no detectable fentanyl exposure.

Misinformation around fentanyl inhalation, however, is prominent online and fueled in part by the federal government. In 2016, the US Drug Enforcement Agency (DEA) claimed that two police officers experienced a fentanyl “overdose event” after inhaling secondhand fentanyl smoke, incorrectly stating that exposure to secondhand fentanyl or absorption of the drug through the skin can trigger a fatal overdose. While the DEA later pulled the statement, a 2019 study found that the DEA announcement was a key part of fueling “fentanyl panic” online.

“It was really appalling for me to see [TriMet] buy into the “secondhand fentanyl” thing,” said a TriMet operator who spoke to the Mercury under the condition of anonymity. “It floored me.”

“But this additional presence isn’t due entirely to drug use,” Graf said. “Having more of a high-visibility presence of security and staff helps put riders at ease.”

TriMet’s ridership has not fully rebounded from the significant drop in rides in early 2020 due to the pandemic. As of June 2022, rides hover around 57 percent of pre-pandemic levels. The sluggish return to public transit can be attributed to a variety of factors—including ongoing COVID surges, a shift towards remote work, and TriMet’s decreased reliability due to a driver shortage—but the perception of safety on TriMet can play a major role for riders who also have the option to drive.

For some riders, increased security presence can be a comfort. For others, transit police and other security staff are perceived as a threat on public transit.

Following the murder of George Floyd and inception of the 2020 protests for racial justice, TriMet launched a significant effort to “reimagine public safety” on transit, garnering survey responses from 13,000 riders and developing a committee to make recommendations to the agency. Discrimination against non-white and low-income riders by transit security was a rider concern long before the racial justice protests, although TriMet points to two independent studies that indicated no racial bias in TriMet fare enforcement and citations. Those two studies, however, were performed with incomplete data.

In the reimagining public safety surveys, riders overwhelmingly said they wanted an increase in unarmed support services on TriMet, which prompted TriMet to remove six transit police positions and reallocate the money towards a new Safety Response Team—TriMet safety employees who carry backpacks full of snacks, dry socks, hand warmers, and other supplies to hand out to riders in need. Safety Response Team members, while barred from giving out citations for code violations, are also intended to deter poor behavior just by being present and visible on the transit system.

To Maia Vásconez-Taylor, an organizer with bus rider advocacy group Bus Riders Unite, it’s inaccurate to assert that increasing the presence of armed transit police puts all riders at ease.

“[Increased transit police presence] makes TriMet safer for who?” Vásconez-Taylor said. “Everyone's idea of safety is going to be different.”

The bus operator agreed, noting that a lot of the riders don’t feel comfortable around police and that TriMet’s push for a greater security presence felt more related to the agency’s public image.

“TriMet keeps trying to make itself palatable for the West Hills techies that drive their Teslas to work anyway,” he said.

The bus driver said that he doesn’t anticipate the new airing out policy to work like the agency envisions. According to the operator, any TriMet policy that requires the bus to delay its schedule leads to riders getting upset with drivers who are required to follow the policy.

“Even if it's for a really good reason, [riders] don't care—they need to get where they're going,” the operator said. “It's clearly a policy that was done by somebody who never actually worked the job.”

Vásconez-Taylor said that the new policy to air out the buses is already having the opposite effect TriMet is hoping for. Vásconez-Taylor recently heard from a rider who saw someone smoking drugs on a TriMet bus. While the experience was concerning, another rider convinced others not to alert the bus driver because they didn’t want the driver to stop and air out the bus for 15 minutes, delaying the late night bus trip.

“It's going to stop people from reporting the usage,” Vásconez-Taylor said.

As opposed to increasing the police presence on TriMet, the operator said he wants to see more Safety Response Team members on board buses and trains, particularly during peak traffic times.

“Anytime they're on the bus or the train, life gets better immediately,” he said. “Not just because people behave better, but because now there's somebody on there that can handle all the passenger questions while I’m operating a 10-ton vehicle.”

Graf said TriMet is continuing to research national best practices on how to best respond to possible safety issues on public transit while preserving equity.

“We understand providing safety and security for all requires a balanced approach,” Graf said. “Having police available, who are familiar with our system, to respond to emergencies and suspected crimes is just one part of a larger, holistic approach to safety.”

Correction: An earlier version of this story indicated that TriMet's increase in transit police may exceed the number of police positions in TriMet's budget. TriMet is filling open police positions that are already budgeted for.