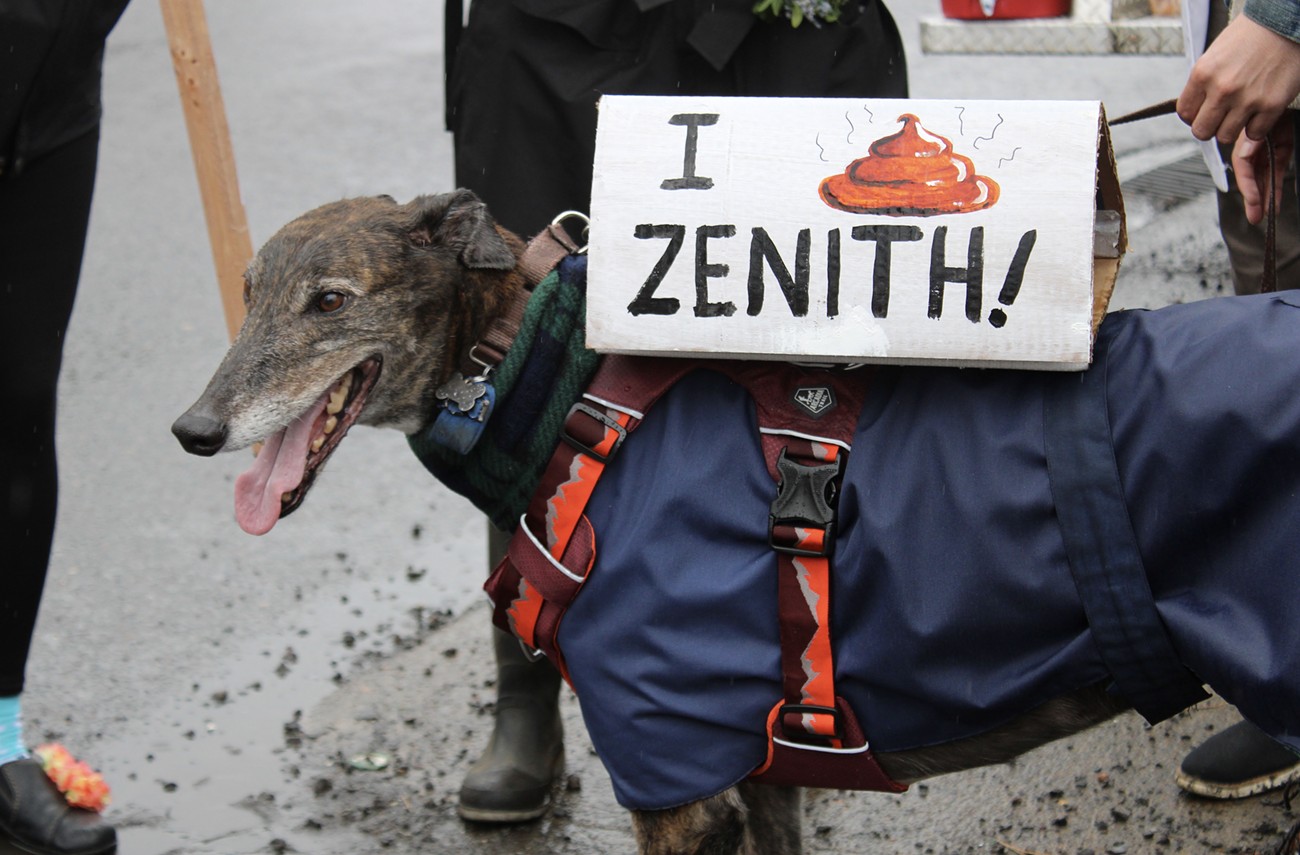 A protest on June 4 outside the Zenith Energy facility in Northwest Portland. Isabella Garcia

One year ago, the city of Portland took an unprecedented step to stop operations at Zenith Energy by denying the oil transporter a permit required to continue running its Northwest Portland facility. The action, while celebrated by environmental activists who had been urging the city to shut down the facility for years, immediately triggered a lawsuit from Zenith.

While multiple local agencies and a regional court have ruled in the city’s favor, Zenith has continued to appeal the case to higher courts, drawing out the legal process and—by extension—allowing its facility to continue operating while its legal right to operate in Portland is debated.

“Shutting down an existing energy facility is some of the hardest work community activists can do,” said Lauren Goldberg, director of environmental defense organization Columbia Riverkeeper. “It is long, hard work, and it doesn’t happen overnight.”

Zenith Energy operates an oil transportation facility in the Northwest Portland Critical Energy Infrastructure Hub—a six-mile stretch of industrial tanks along the Willamette River that store over 200 million gallons of liquid fuel. Zenith transports crude oil by pipe and train from Canada, through several Portland neighborhoods, and ships the oil out from a dock along the river. In 2020, the company transported over 200 million gallons of oil through its facility.

The CEI Hub sits on unstable, infill land that is expected to liquify during a large earthquake, like the predicted 9.0 magnitude Cascadia Subduction Zone quake. According to a recent study commissioned by Multnomah County, the CEI Hub would spill over 200 million gallons of combustible liquid fuels into the Willamette River, rivaling some of the largest environmental disasters on record. The report also notes that Zenith is one of the few facilities in the hub that does not disclose the total number of tanks it owns, the contents and capacity of all of the tanks, or the age of the tanks, which affects seismic resilience.

Given the environmental threat of fossil fuel storage in the Hub, the city’s comprehensive plan, and years of community advocacy against the facility, city of Portland officials denied Zenith a land use permit in August 2021. Without the permit, Zenith was unable to renew its air permit with the Oregon Department of Environmental Quality which is required in order to operate in the state.

“It took a gargantuan effort to convince the city of Portland to use its legal authority to stop Zenith’s oil by rail operations,” Goldberg said, “and now we recognize that we need to work through the legal process to ultimately come to the outcome where people’s lives and livelihoods, and the Columbia and Willamette rivers, are protected.”

Despite now operating with an expired air permit, Zenith has still been able to continue shepherding oil through Portland neighborhoods for the past year as the legal battle between the city and company wages on. The case is currently being considered by the Oregon Supreme Court.

At a protest outside the Zenith facility in June, environmental activists rallied against the oil transporter and called on city officials to place a moratorium on Zenith’s operations while the legal case is being decided.

“The permit was denied on August 27, 2021, so why the hell is Zenith still operating?” Extinction Rebellion member Jan Zuckerman said to the crowd.

The challenge, according to legal experts, is that the city likely has no other legal grounds to shut down the facility, other than deny the land use permit—the legal validity of which is currently being decided by the Oregon Supreme Court. The Supreme Court has no particular timeline for when a decision must be made in the case and, even if the court rules in the city’s favor eventually, Zenith can continue to appeal the decisions to higher courts.

To Goldberg, the fight to shut down Zenith is reminiscent of the work to shut down the Trojan Nuclear Power Plant, Oregon’s former nuclear plant in Columbia County that was decommissioned in 1993. The Trojan plant, intended to provide cheap power to Oregonians, started facing activist opposition in the late 1960s when the facility was first proposed. The construction of the nuclear plant was completed anyway and, from 1977 to the mid-90s, environmental activists launched numerous efforts to decommission the Trojan plant. In the midst of the plant's operations, it seemed like activists could only make tiny gains; when geologists learned of a St. Helens faultline near the plant and activists called for it to be shuttered, operations were paused for nine months while the plant’s seismic resilience was improved. Ballot measures to shut down the Trojan plant submitted by activists cost Portland General Electric—the plant owners—millions of dollars in counter-campaign funds, but were ultimately not approved by voters.

In retrospect, the plant’s downfall was the culmination of repeated construction issues, looming maintenance costs, and a growing anti-nuclear sentiment in Oregon fueled over the years by activists. In the face of the climate crisis, however, patience with the long process can be more challenging.

“It is so hard to shut down existing facilities, which is what makes the city's decision [to deny Zenith the land use permit] bold and needed in our climate emergency that we face, but it’s also where I think a lot of folks understandably get really frustrated with the glacial pace that the law is set,” Goldberg said.

That’s why Columbia Riverkeeper prioritizes opposing new fossil fuel infrastructure, like campaigning against a proposed fracked gas power plant in Umatilla County last year and supporting Portland’s Fossil Fuel Terminal Zoning Ordinance—a policy that restricts the development of new fossil fuel infrastructure in the city that was approved unanimously by city council this week. City leaders have been trying to put the ordinance in place for over six years, despite significant pushback from the oil industry.

Environmental activists aren’t perfectly satisfied with the ordinance. The policy makes allowances for the expansion of infrastructure that exclusively deals with renewable fuels like biodiesel, despite federal projections that demand for both fossil fuels and biofuels will stay stagnant as fuel efficiency increases and appliances and cars are electrified. However, the city’s tenacity to put the ordinance in place, Goldberg said, signals a commitment to reducing the threats to human and environmental health in Portland.

“I do think we will ultimately prevail against Zenith, but I think it will take that same tenacity and determination that was relied on to succeed against the nuclear power industry,” Goldberg said. “It doesn’t happen overnight and it often doesn’t happen with one court case.”