City leaders are planning to replicate the treatment in other areas of Portland. 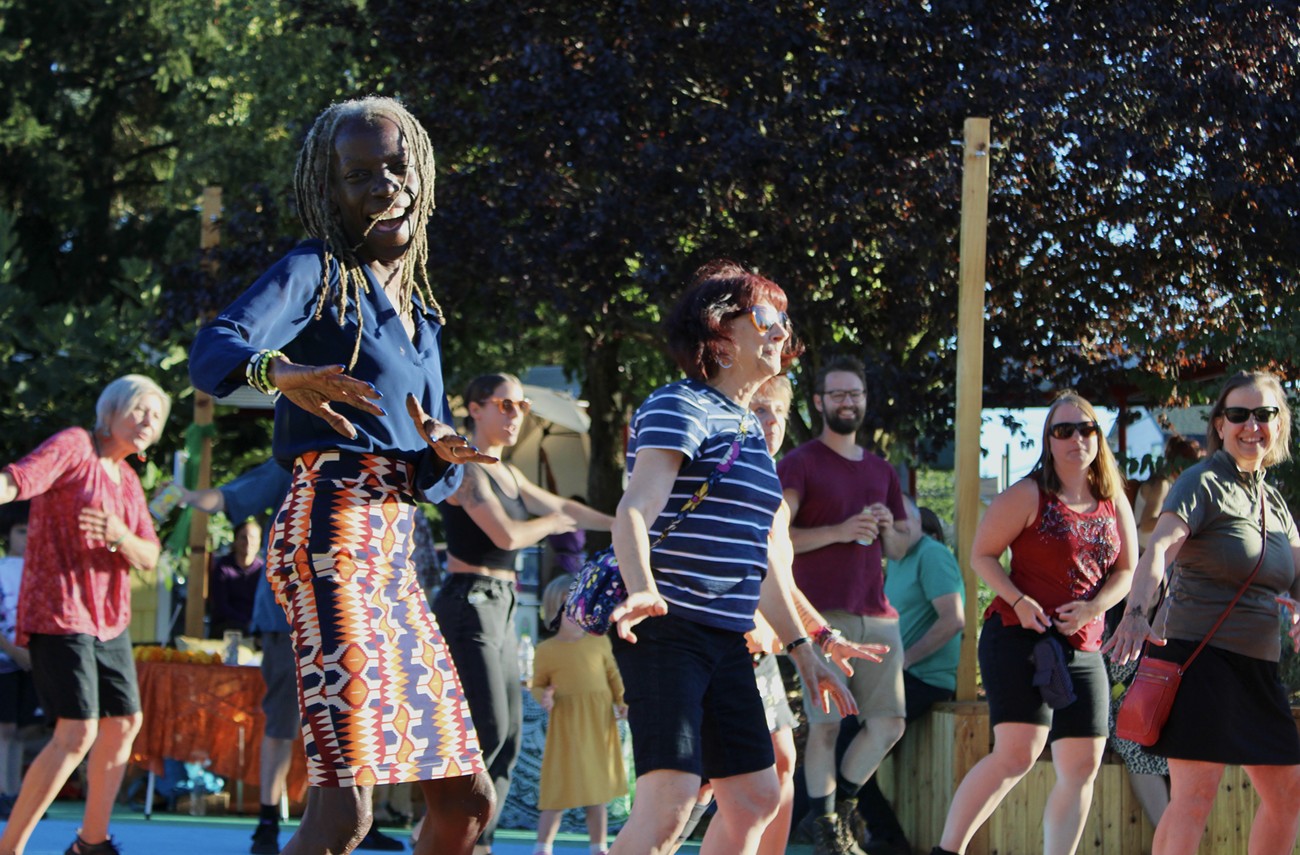 What once was the site of car crashes, pedestrian threats, and drive-by shootings in Southeast Portland’s Mt. Scott-Arleta neighborhood is now a rainbow-striped community space.

The new extended Arleta Triangle Square, a public plaza located in the former right-turn lane that allowed cars to bypass the light at SE 72nd Avenue and SE Woodstock Boulevard, officially opened to the public Thursday with a celebratory block party. The Arleta Triangle, formerly a small traffic island with trees under control of the local neighborhood association separating the turn lane from the intersection, now encompasses the entire lane. While numerous street plazas have popped up in Portland during the pandemic, the Arleta Triangle Square was uniquely created by the city in response to gun violence in the Mt. Scott-Arleta neighborhood.

“We went from two or three shootings a year, to daily [shootings] for two or three months,” Mt. Scott-Arleta Neighborhood Association Chair Matchu Williams said. “Some of these exchanges weren’t just firing off a couple bullets in drive-bys, but 25 to 93 shell casings recovered by police. Terrifying.”

Not wanting to add more police presence to the area, neighbors took note of what design elements in the neighborhood were contributing to speeding, violence, and other safety concerns in the community. Nadine Salama, a neighbor who runs the nearby Green Tulip preschool, spearheaded conversations with other immediate neighbors to the intersection to identify issues of low lighting, the use of a nearby church parking lot for reckless driving at night, speeding along SE 72nd Avenue, and use of the right turn lane—called a slip-lane—as a getaway route following shootings.

The neighborhood partnered with City Commissioner Jo Ann Hardesty, who oversees the Portland Bureau of Transportation (PBOT) in September 2021 to address their concerns. By October 2021, lighting along the street and in the nearby Mt. Scott Park had been brightened, three entrances to the church parking lot were roped off, trees near the roadway were trimmed to improve visibility for drivers and pedestrians, orange barrels with “Local Access” signage were placed at intersections in a six-block radius of the intersection to slow traffic, park rangers were added to Mt. Scott Park, and plans started to close the slip-lane at SE 72nd Avenue and SE Woodstock Boulevard to traffic.

While the announcement of using orange traffic barrels to combat gun violence was met with doubt from some community members and media outlets, shootings in the neighborhood decreased by 64 percent during the first three months of the pilot program, according to crime data. A second analysis by the city confirmed that the decrease in gun violence has remained the same over the course of a year.

Crash and other traffic safety data takes longer to collect and analyze than crime statistics, but anecdotal evidence from neighbors indicates that driver behavior near the Arleta Triangle has shifted as drivers traveling west on SE Woodstock Boulevard have to wait to turn right at the intersection, as opposed to being able to use the slip-lane to veer right onto SE 72nd Avenue, regardless of the traffic signal. Williams noted that speeding along SE 72nd Avenue remains a concern for neighbors.

At the Thursday block party, Hardesty declared the pilot a success—not just because of the violence reduction, but also the community engagement process.

“You can see the smiles of the community and what they will always remember is that they were heard and we tried to help,” Hardesty said. “And had it not worked, we would have tried something different. That’s what we have to be unafraid of—trying things that we don’t know will work.”

Following the success of the Arleta Triangle to address traffic safety and gun violence while simultaneously creating a new outdoor community gathering space, the city is looking to expand the effort into other areas of Portland.

During the last budget cycle, the city dedicated $800,000 to make both temporary, immediate changes—like the orange barrels identifying local access intersections—and long term design changes—like public plazas—to address gun violence. The Arleta Triangle project cost about $25,000 to complete, including the barrels, lighting, and other nearby changes. However the design, materials, and construction labor for the plaza were all donated by Portland State University (PSU) and Anderson Construction, so future projects may be more expensive. Hardesty expects three additional public plazas to be created over the next three years using the dedicated funding.

Portland’s Community Safety Division is currently collaborating with PBOT to determine what other intersections or slip lanes the pilot program—tentatively dubbed “Community Crossroads Program”—should expand to next. East Portland has the highest concentration of gun violence and high crash corridors in the city, so it’s likely the majority of the interventions will be in that part of town.

For other neighborhoods that may be next to participate in the program, Williams recommends gathering input from as many community members as possible, not just the people who regularly engage with the neighborhood association.

“We didn’t want just the usual voices, which is white-presenting males—myself included—to bring this forward,” Williams said. “We wanted to reach out to the community to get their input to come up with the design proposal.”

The neighborhood, in collaboration with PSU’s Center for Public Interest Design, sent out 400 surveys in five different languages to nearby residents. From those surveys, it became clear that neighbors wanted a safe place to gather and interact that had greenery and vegetation.

Gathering that type of input is critical to designing a space that will actually be used by the community, according to Scott Mooney, an architect with Bora Architects and fellow with PSU’s Center for Public Interest Design.

“You have to thread the needle between what the community needs and what is allowed for this type of plaza design and what resources you have to work with,” Mooney said. “Make sure that you have a diverse set of partners so you can get across the finish line.”

For community members who may want to approach the city with a plan to alter design elements in their neighborhood, Williams recommends developing a specific proposal with action items that leaders can evaluate the feasibility of. However, even with a specific and feasible proposal, the Mt. Scott-Arleta neighborhood had to be tenacious when finding the right city partner to take on the project.

Williams said that the neighborhood reached out to several city bureaus, commissioner’s offices, and local district attorneys before finding a receptive ear in Hardesty’s office, particularly with Hardesty staffer Andre Miller. Williams noted that other offices and bureaus told the Mt. Scott-Arleta neighborhood that the changes they were requesting fell outside of that particular bureau or office’s purview, so couldn’t be addressed. This is a common complaint associated with Portland’s existing commission form of government, where bureaus are overseen by different commissioners and not set up for collaboration. Williams said that Miller and Hardesty opted to initiate collaboration with other bureaus, taking on a role that he believes a city manager could play in Portland. Portland voters will have an opportunity this November to vote on whether the city should hire a city manager, do away with commissioner-run bureaus, as well as expand city council and use ranked-choice voting for city elections.

Hardesty, who has mostly stayed out of the conversation surrounding the charter ballot measure, said that collaboration across city bureaus is possible given Portland’s current government system as long as elected officials are willing to collaborate.

“I’m not limited by the bureaus that are in my portfolio, so if the community needs something, I’m not going to say to them, ‘No, that’s not my bureau’,” Hardesty said. “It’s not the system, it’s who we elect in the system.”

Williams notes that there is still some work to be done at Arleta Triangle, like installing bike racks, adding solar-powered lighting above the plaza, and developing a system for community members to reserve the space for events.

“What’s unique about this space is that it’s not a private venue or another public park, this is an autonomous space that the city granted to the neighborhood,” Williams said. “That’s really unique and hard to come by in a city that’s becoming increasingly privatized and controlled by development interests.”