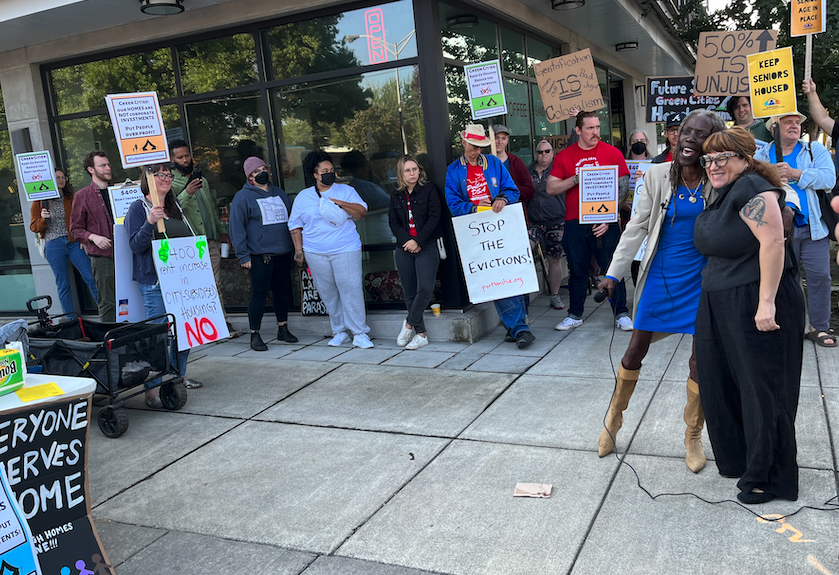 The group gathered at the corner of N Interstate Ave. and N Prescott St. to advocate for tenants living at the nearby Prescott apartment complex. In August and September, several Prescott tenants living in units set aside for low-income renters received notices that their rents were due to increase between 30 and 50 percent by November. Those 31 low-income units are made possible through a city policy called Multiple-Unit Limited Tax Exemption (or MULTE) that waives property tax payments for apartments in exchange for the landlord providing a number of apartments to low-income Portlanders below market rate prices. But, thanks to a number of loopholes in local and state housing policies, these skyrocketing rent hikes are completely legal.

Following the first wave of outcry from tenants who say they'd be displaced by the rent increase, Prescott property owner Green Cities announced that, "to lessen the impact" of the coming rent hike, it would delay the rent increase until February 2023. However, tenants must sign an agreement with Green Cities by October 21 in order to benefit from this delay, giving renters little time to decide.

"I still don't know what we're going to do," said Kelsey Schreiner, a Prescott tenant who shares an apartment with her four-year-old daughter. Schreiner told the Mercury last month that she wouldn't be able to cover the monthly $400 rental increase issued by Green Cities.

"A 400 dollar rent increase is an eviction notice," said Kim McCarty, director of CAT. "And where is this money going? Is it going back into the community? No."

McCarty pressed local and state lawmakers to make changes to the rental laws that have allowed places like the Prescott to legally impose these types of rent hikes. Her call was echoed by former Portland city commissioner Chloe Eudaly.

"I am angry that, after seven years of City Council declaring a housing state of emergency, it continues to drag on," said Eudaly, who pushed for tenants protection policies while on council. "It sure doesn't feel like it's being treated like an emergency."

"It is absolutely criminal with the amount of money spent on affordable housing in this city, what is happening here," said Hardesty, who is the sole renter on Portland City Council. "I could not endure a 50 percent increase. I don't think many tenants in this city could."

Hardesty said she's pushing her fellow commissioners to hold an emergency work session to address the Prescott tenants' concerns and to address issues within the city's MULTE policy.

That decision is up to City Commissioner Dan Ryan, who serves as the city's housing commissioner. According to Ryan's office, Ryan has scheduled a work session on the topic for November 1.

In a statement emailed to the Mercury, a spokesperson for Ryan's office noted that Ryan has currently been working with Green Cities and Multnomah County to discuss "all potential options to address the impending rent increases." It's not clear if Ryan is also looking to retool MULTE.

Hardesty also proposed putting all of the city's public lands into a public land trust to guarantee the properties are only used for housing low-income renters in the future.

"There are so many things we could do if we cared about people in Portland rather than profits in Portland," Hardesty said.