According to the county, the budget package requires cuts that could lead to at least two current homeless shelters shuttering within the year—and the elimination of rent assistance programs. 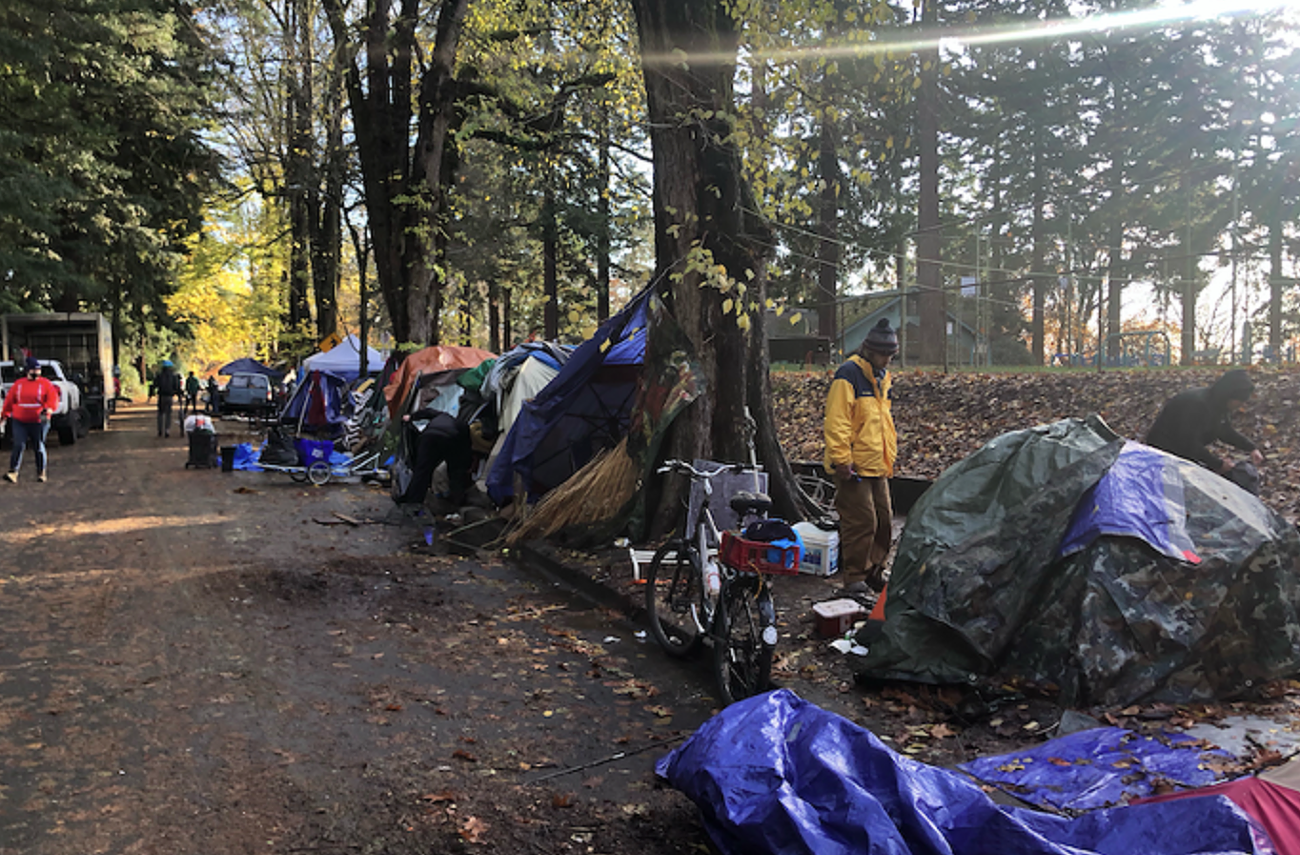 Portland City Council voted 3-0 Wednesday morning to approve a controversial budget package that lays the groundwork for a plan to criminalize street camping and build mass encampments to hold unhoused Portlanders by 2024. Both city commissioners Carmen Rubio and Jo Ann Hardesty were absent for the morning's vote. (According to council staff, Hardesty is on a planned vacation and Rubio is out sick.)

The bulk of the $27 million budget package—$17 million—goes toward building and operating three of the proposed six outdoor encampments planned to hold up to 250 people. The rest of the funding covers salaries for 50 new homeless outreach jobs, fills budgetary gaps in the city department responsible for sweeping homeless camps, and pays for a contractor to help set up a diversion program to soften the blow of criminal penalties levied against people camping outside. A sliver of the package—$150,000—addresses the dearth of housing in Portland by directing the housing bureau to identify 400 city-owned properties that could be redeveloped into affordable housing.

The programs these funds are set to support were first introduced in late October by City Commissioner Dan Ryan and Mayor Ted Wheeler without any identified funding source.

"For far too long we have tolerated the intolerable," said Ryan, who oversees the city's housing bureau, before voting Wednesday. "These resolutions do not criminalize homelessness. What is criminal is for government to accept the status quo."

Prior to voting, Commission Mingus Mapps said that he knows the budget package won't end the city's homelessness problem.

"However," he said, "I do hope that the investment we make today we can mark the beginning of the end of Portland's homelessness crisis."

The $27 budget package cuts $8 million that the city previously committed to the Joint Office of Homeless Services (JOHS), which is co-funded by both the city and county.

According to the county, the city’s $8 million budget cut to JOHS alone could threaten to shutter two homeless shelters in the next year. If the cut is permanent, it could lead to a loss of 249 shelter beds and the reduction of rent assistance and housing support for 1,449 county residents.

“As you can see, any on-going budget reductions to shelter, street outreach and housing programs could be devastating and counterproductive for our shared goal of urgently ending homelessness,” writes current Multnomah County Chair Deborah Kafoury in a letter sent to City Council Wednesday morning.

Another budget item passed Wednesday, as part of the council’s larger Fall budget monitoring process, threatens to withhold an additional $7 million in city funds from JOHS unless the Multnomah County Board of Commissioners hands over $15 million to go toward emergency rental assistance and eviction legal defense.

Before casting his vote, Ryan appeared to brush aside concerns about how the proposal is being funded.

It's not clear how the county or city will find funding to keep open the two shelters—River District Navigation Center and Wy’East Shelter—threatened by the JOHS budget cuts. No commissioners addressed that predicted cut Wednesday.

The $27 million funding package was first pitched to the public in a November 17 council meeting, where community members largely panned the investment. Most urged commissioners to instead invest the $27 million into building affordable housing.

“I am angered that this money is being used to criminalize houselessness rather than house people,” said Madison Mordaunt.

When City Council first passed the then-unfunded ordinances to ban street camping and create mass encampments in early November, commissioners heard from dozens of property and business owners who supported the plan. None of those supporters offered testimony during the November 17 hearing on the plan’s funding. Commissioners instead heard from several business owners and homeowners who opposed the idea.

Small business owner Desiree Mariscal said she was “appalled and embarrassed” to hear the city use businesses as an excuse for forcing people into mass encampments.

“It’s really unprofessional,” said Mariscal. “I hope that one day you understand that humanity comes before money.”

Mariscal said she told her friends in other cities that running a business in Portland is difficult because of poor city leadership and over-policing—not due to homelessness, which other business lobbying groups point to as a major deterrent.

Frann Michel, who identified herself as a landlord, called the budget package “a counterproductive waste of taxpayer money.”

“I strongly oppose spending these funds on camps and I would strongly support a housing first approach,” said Michel.

Ryan characterized public criticism of the proposal as being driven by "the houseless industry" and the "special interests" that receive support for the industry. The majority of public testimony City Council has heard in opposition of the street camping ban and encampment plan have come from homeless Portlanders, nonprofits that work to address the needs of unhoused Portlanders, and members of the public unaffiliated with homeless or housing service providers.

The majority of those in support of the proposal are business owners, tourism lobbyists, real estate firms, and other industries that see visible homelessness threatening their financial stability. No homeless Portlander has testified publicly in support of the city's proposal (however, Ryan said Wednesday that he has spoken to one unhoused person who supports it).

The funding package is only a fragment of the total capital needed to bankroll the city’s ambitious street camping ban. According to the city budget office, operating just three camps of 150 people could cost up to $6.8 million annually to operate (the office has yet to publish a calculation for the proposed six camps of 250 people). And the proposal’s larger goal of creating 20,000 new units of affordable housing in ten years comes at an estimated cost of $10 billion.

The city has been clear that it needs financial support from other government agencies—like Multnomah County, Metro Regional Government, and the state—to see the proposal through. Yet it has been unable to secure committed funding from any of these agencies, largely because it didn’t involve these agencies in forming the sweeping plan.

Multnomah County Chair Kafoury has declined to commit new funding to the city’s plan, instead pointing to the millions of funding already dedicated by the county to regional programs proven to address chronic homelessness. She has additionally accused the city of using faulty data to sway the public's support of this plan.

Wheeler has boasted that both incoming Multnomah County chair Jessica Vega Pederson and Governor-elect Tina Kotek have expressed their support of the budget plan.

Last week, Vega Pederson told the Mercury that while she shares City Council’s commitment to addressing the region’s homeless crisis, she still needs to “figure out the specifics regarding the city’s proposal, particularly in terms of ongoing funding for any new efforts.” She raised specific concern about the city’s funding commitments to the JOHS.

Kotek did not respond to the Mercury’s questions about her purported support of the budget package. In a November 16 press statement, however, Kotek echoed Vega Pederson’s cautious endorsement of the idea. Kotek said she “generally supports” the city’s approach to ending street camping and “will continue to follow closely as more detailed plans are developed.”

The funding package will go info effect immediately, pending a few significant decisions. The city has yet to identify where the proposed encampments will be located, or what outside contractor will be responsible for operating the camps.

Wheeler concluded the council vote addressing the public's opposition to the detailed plan.

"The city cannot wait for a perfect solution," said Wheeler. "I know that leading on this issue, while critical, may not be received favorably. But doing what is right is not always popular."