Staff say they were told not to discuss a coworker's termination at work or outside of work. 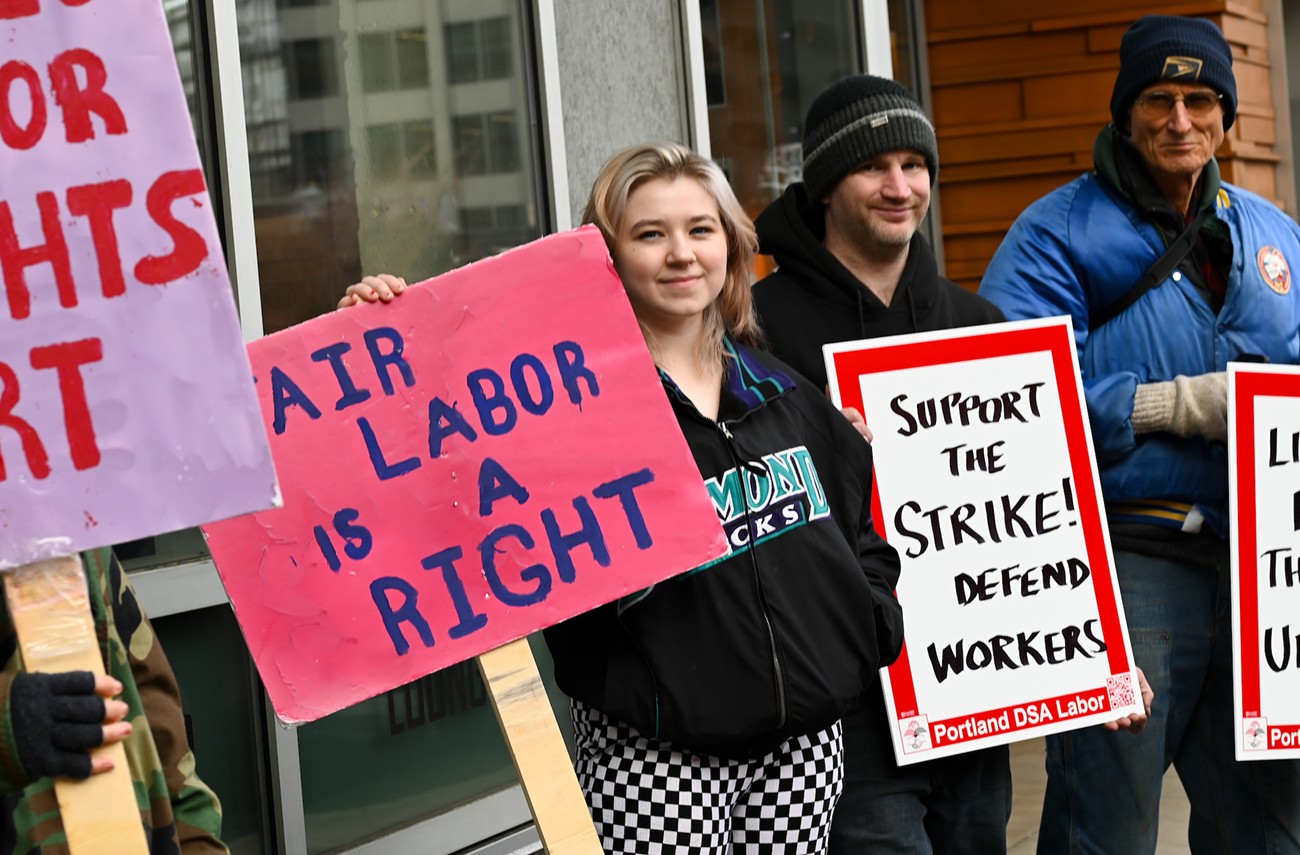 Workers have picketed Living Room Theaters in downtown Portland since Saturday, as part of an Unfair Labor Practice (ULP) strike, alleging that the company had violated labor laws in management's behavior towards staff. Employees said that seven of the company’s nine non-managerial staff members joined the four-day strike, which is expected to conclude Tuesday at 8 pm.

The work stoppage originally started Friday afternoon, out of the eyesight of theatergoers. In the following days, the small group held signs and distributed flyers in front of the theater. They also didn't work their scheduled shifts.

According to Audra Sweetland, a server at the theater, Living Room Theater’s Chief of Operations Nick Cruz told an employee to not discuss the termination of a fellow worker while at work. Alleging that the request was a retaliation by management against workers, employees attempted to discuss their concerns at the business' corporate office Friday.

"They refused to meet with us, or recognize us as a group," Sweetland told the Mercury. "As part of our ULP strike, we staged an eight hour sit-in [Friday], and left when the business closed."

Workers began visibly picketing the theater on Saturday, in response. "We find the offense of telling us not to talk about work, at work or outside of work, to be extremely egregious," Sweetland told the Mercury.

Living Room Chief Executive Officer Steve Herring said the company learned about the strike on Sunday, from the employee press release about the strike. In a written statement to the Mercury, Herring seemed unaware of the Friday sit-in and countered some of the strikers' claims:

“We recently learned that a few employees are engaging in an unfair labor practice strike outside our theater. Most of our employees are not. We only learned this afternoon the reasons for the alleged unfair labor practice in a press release that was sent to local media. We’re looking into the allegations, but currently, do not believe the press release is accurate…. We respect and support our employees’ right to speak up, work together, and participate in concerted activities protected by law, including legal strikes.”

At 11 am on Tuesday, there were two Living Room Theaters employees and two Democratic Socialists of America members picketing in solidarity. Holding pink and purple signs, Sweetland and another Living Room staff person, Jen, estimated there are nine non-management staff at the theater and seven have joined the strike. They were picketing in shifts, due to the small size of the group and the hours they needed to cover. "Part of the ULP guidelines say that we have to have a physical presence outside the building every day that we're on strike," Sweetland explained.

Picketing workers mentioned seeing corporate office staff inside the theater, working to keep it running over the weekend. Herring did not respond to the Mercury’s questions about whether corporate staff were running the theater during the strike. Living Room Theaters’ employees aren't unionized, so there's no fund for picketers missing their shifts. However, due to national labor laws, participants in a ULP strike are entitled to return to their jobs.

Sweetland said that the four-day ULP strike will conclude Tuesday at 8 pm, adding: "It's an ongoing situation. We may strike again for a different reason."