Rise of the Blogs

1
Page 31 is a crack up. Are they suggesting lying to the public?

"However, when police are seen as wrong or over zealous, the
outrage is extreme, and long-lasting


But what is the city to do when the comments are correct and true and the police acted inappropriately (as in the example the report cites - The Chasse incident and Kruger's nazi sympathies). The report just suggest that the city spin the issue. It doesn't mention that perhaps the City should take action to correct the real problem and explain to the blogging and commenting public how they have corrected a very real problem. It just suggests pointing out when the public is wrong and "shaping" the context.
Number Six on January 20, 2010 at 6:09 PM Report this
2
Great reporting, guys. The world needs more media coverage as clear-eyed as this.

I think the city's methodology shows an important difference between the audiences cultivated by legacy media and the ones cultivated by new media. The city was scouring the Web for POLICY stories. But any given policy story only appeals to the narrow sliver of audience the policy in question effects.

Therefore, the digital era will usher in the Golden Age of Local Policy Reporting!!! QED.

And seriously, good on the city for being open-minded enough to simply take the journalistic value of Web-only operations as a given.
MichaelAndersen on January 21, 2010 at 9:13 AM Report this
3
Thanks for reporting on this, Matt. I second Michael's comments. I also add some words of caution in stating that mainstream media is flagging.

This report separates "Creators", the primary sources of news and information, from "critics", those that express opinions about the content. The audit is focused on measuring the critics, which seem to engage via blogs, but says little about where the original content is reported, save for one sentence:

Where does the most information about city government originate? This is the true measure of the news media's effectiveness in terms of its civic role to speak truth to power. Discussions don't take place without a primary source of information.

I suspect in most cases the conversations happen where the information is reported, but that wasn't studied in this audit.
LibbyTucker on January 21, 2010 at 12:04 PM Report this 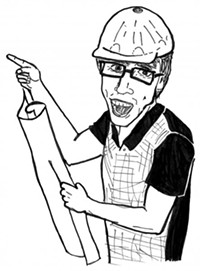 furthermore, it makes sense that a website like "neighborhood notes" draws a bunch of hits about the city's actions. The day-to-day working of local neighborhood policies (stop signs, zoning permits, etc) are the most likely places for local citizens who don't otherwise generally care too much about civic policy to directly comment on and critique "city council." While I'm not criticizing Bike Portland at all, if you have a website who spends that much time writing about city plans for bike lanes, it makes sense that it'll garner a significant bulk of comments, city-wide, about local government, and that doesn't necessarily mean that people don't turn to the Oregonian or even the Mercury et al for coverage of broader issues (sustainability planning, Rose Quarter plans, MLS to PDX, etc.). Portland can be as bike-friendly as it wants, and can have quite a significant interest in how bike plans are crafted now and in the future, but the suggestion that new media websites like bike portland is the number one place for commentary on what city hall is doing ignores the significant concern people have for other issues in this region. What if Portland has a substantial "new media" presence, with blogs (both journalism and old-crank driven) focused on a handful of specialized topics, but doesn't have any blogs specifically focused on getting jobs in the region or demanding police accountability?
ambrown on January 21, 2010 at 5:06 PM Report this
5
Good points, Libby and Aaron. Libby, very clever observation about that one sentence, I thought.

Aaron, I share your worries that some niches will be well-covered and others will be poorly covered. But you sort of seem to be assuming a static marketplace. If there's a market for a well-reported blog about police accountability -- written by a civil rights lawyer, maybe, as a marketing tactic? -- it might appear tomorrow.

Also, I wonder whether you ever read Oregonian stories about either "getting jobs in the region" or police accountability. I know I should. But I never do. To me, those are both spinach stories that I never get around to. I'm glad the O (and the Mercury, and WW, et al) are around to cover them. But I don't read such pieces when they appear, and their mere existence doesn't motivate me to consume these outlets' content or to patronize their advertisers.

Maybe this is a problem. Or maybe the stories don't do much good anyway, if not enough people like me are reading them. If a story seems like a good idea to have around but doesn't get read by very many people, I don't think it's actually that good of an idea.

Libby, the ability of the marketplace to keep changing also applies to your implication that legacy outlets are probably still digging up most of the facts. (An implication I agree with.) If legacy outlets do keep declining, there'll be a growing hunger in the media marketplace for facts, and anyone who can find ways to provide them will find it increasingly easy to attract attention.

Okay, now removing my shameless optimism hat.
MichaelAndersen on January 21, 2010 at 9:09 PM Report this
6
The city paid a fee for a "consulting agency" to do a search for terms on websites, then called it an "audit" and proclaimed that "blogs are racing ahead of mainstream media"?

Given that the largest blogs are run by media companies, and profound lack of critical thinking in both this article and the city's "audit", I'd say the evidence for the opposite is pretty convincing.

And let's get real--"stimulating discussion" does not equate to critical thinking or "news"--it just equates to software that has a "comment" function.
on January 24, 2010 at 11:26 AM Report this
7
so how did this become an ONI comment thread? rock on.
tabarnhart on January 30, 2010 at 10:30 PM Report this