Occupy Portland: So Now What?

The Occupiers Have a Soapbox—So Use It

1
To the Israeli : go home and fix your own version of Democracy, which has its' own severe problems and leave us to mend our own.
And quit taking our tax dollars to help prop up your own system.
Learn how to cook a decent burger here and go home.
frankieb on October 20, 2011 at 5:54 AM · Report this

2
frankieb, if you said that about the Mexicans, you would be called a racist. But the left wing in Poorland embraces Nazis like you. You must have be indoctrinated, I mean taught, in government schools. Israel has the closest form of government to a democracy in the entire Middle East.
Andy from Beaverton on October 20, 2011 at 9:22 AM · Report this
3
Ranked Choice voting?
bruce123456 on October 20, 2011 at 9:30 AM · Report this
4
Andy, it may be the ONLY Democracy in the Middle East, but is not to say they don't have their own set of problems. Their system also ensures that hard line right-wing religous zealots stay in control over more of their government than they should.
Don't try to paint me as 'anti-semetic' either. One can be critical of Israel while embracing the Jewish faith.
There are Jews in my family, and I've participated in many of the ceremonies. I've been to Dachau and seen first-hand the horror of what happened.
You casually throw out 'Nazi', when I just think that I shouldn't have to read critisism about our form of democracy from an Israeli in regards to this 'occupy'. Or any foriegner.
Check yourself.
There are also good reasons why we use the electoral college.
frankieb on October 20, 2011 at 10:03 AM · Report this
5
@bruce: Ranked choice voting is a much cleaner option that what we have now, the winner-take-all system. If you want to see an excellent summation of what Ben-David was referring to, check out these videos. The guy who made them clearly lays out the problems with different kinds of electoral systems, and does so while using pictures of cute animals. That is always a good thing.

The problem with first-past-the-post (what we have now): http://www.youtube.com/watch?v=s7tWHJfhiyo

And alternative, aka ranked choice voting, explained: http://www.youtube.com/watch?v=3Y3jE3B8HsE…
Joe Streckert on October 20, 2011 at 11:57 AM · Report this
6
BOO! I thought there were going to be 'good ideas' for fixing out 'unequal country' in this article?

7
@Shizuko - Actually, the streets are safer when people without licenses aren't out driving.
Reymont on October 20, 2011 at 1:44 PM · Report this
8
@Teresa-I agree broadband access is essential in creating a truly democratic system. In case you aren't already aware there is a National Broadband Plan in place. It's an ambitious but realistic set of well-defined goals connected to many local projects around the country. Unfortunately, it seems like it has gotten little attention in mainstream media.
on October 20, 2011 at 4:46 PM · Report this

9
frankieb, how about some Dr. Martin Luther King Jr.?

". . . You declare, my friend, that you do not hate the Jews, you are merely 'anti-Zionist.' And I say, let the truth ring forth from the high mountain tops, let it echo through the valleys of God's green earth: When people criticize Zionism, they mean Jews--this is God's own truth.
"Antisemitism, the hatred of the Jewish people, has been and remains a blot on the soul of mankind. In this we are in full agreement. So know also this: anti-Zionist is inherently antisemitic, and ever will be so.

"Why is this? You know that Zionism is nothing less than the dream and ideal of the Jewish people returning to live in their own land. The Jewish people, the Scriptures tell us, once enjoyed a flourishing Commonwealth in the Holy Land. From this they were expelled by the Roman tyrant, the same Romans who cruelly murdered Our Lord. Driven from their homeland, their nation in ashes, forced to wander the globe, the Jewish people time and again suffered the lash of whichever tyrant happened to rule over them.

"The Negro people, my friend, know what it is to suffer the torment of tyranny under rulers not of our choosing. Our brothers in Africa have begged, pleaded, requested--DEMANDED the recognition and realization of our inborn right to live in peace under our own sovereignty in our own country.

"How easy it should be, for anyone who holds dear this inalienable right of all mankind, to understand and support the right of the Jewish People to live in their ancient Land of Israel. All men of good will exult in the fulfilment of God's promise, that his People should return in joy to rebuild their plundered land.

This is Zionism, nothing more, nothing less.

"And what is anti-Zionist? It is the denial to the Jewish people of a fundamental right that we justly claim for the people of Africa and freely accord all other nations of the Globe. It is discrimination against Jews, my friend, because they are Jews. In short, it is antisemitism.

"The antisemite rejoices at any opportunity to vent his malice. The times have made it unpopular, in the West, to proclaim openly a hatred of the Jews. This being the case, the antisemite must constantly seek new forms and forums for his poison. How he must revel in the new masquerade! He does not hate the Jews, he is just 'anti-Zionist'!

"My friend, I do not accuse you of deliberate antisemitism. I know you feel, as I do, a deep love of truth and justice and a revulsion for racism, prejudice, and discrimination. But I know you have been misled--as others have been--into thinking you can be 'anti-Zionist' and yet remain true to these heartfelt principles that you and I share.

Let my words echo in the depths of your soul: When people criticize Zionism, they mean Jews--make no mistake about it."

10
It's hilarious Franklieb and Andy from Beaverton are fighting! HAWHAWHAW
Tom [______] . on October 20, 2011 at 9:02 PM · Report this
11
Tom, funny, eh?
Andy, you can write 17 pages of scripture, quotes from the great minds of our time and past times, etc etc fucking etc....
It still doesn't change the fact that I am most certainly not a Nazi - and lobbing those accusations so carelessly I think speaks more to your own self than me.

frankieb on October 20, 2011 at 9:46 PM · Report this
12
It is also worth a million yuks that the reappearance of Andy From Beaverton in our ranks means the invocation of Godwin' Law at an unprecedented second comment in! Congratulations, Andy! Beaverton must be proud to have ya'!
on October 21, 2011 at 9:59 AM · Report this
13
And of course, that was "Godwin's" law, with a final 's'...

If I figured anyone would listen, I would let the people currently occupying those two parks know that they've already done what needed to be done. That is to say; they've garnered publicity for a slew of issues that we weren't talking about as a nation, and needed to. Now we are. Good job.

Now you need to stop camping in a fucking park and calling it a protest. What happens now is that You become the story, and that's not what is needed. Because when the story becomes about You, it becomes about that young'un who prefers natural fibers and smokes copious amounts of herb, has a dog named Kaya, etc. etc. etc. When stereotypes like that become the public face of a movement, the movement is its own worst enemy.

Explain in detail exactly what it is you imagine to be "unfair" about our economic system.
on October 21, 2011 at 6:40 PM · Report this
15
"Someone who's picked up for driving without a license is now put into this deportation pipeline"

LOL
on October 21, 2011 at 6:49 PM · Report this
18
Dear Mercury:
I don't know if this says more about you or the people you chose to interview, but I found it astounding that no one mentioned campaign finance reform. If there was one cause to rally around, this should be it! As it stands, our elected officials spend an unwarranted amount of time trying to muster up money to support their election campaigns, time that would be much better spent, oh maybe, gathering the necessary information required to make informed decisions and solving actual problems. Instead, they're forced to take in huge sums of money from corporate interests to fund their campaigns, and in turn they're indebted to said supporters. They couldn't vote against the grain even if they wanted to, not if they'd like to stay in politics, that is. It's gotten so much worse in recent years due to the limitless amounts of cash that can be funnelled thru PAC's, not to mention the corrosive influence of lobbyists.

Until these problems are fixed our goverment will remain incapable of goverening "for the people".

Cheap, public Internet would be great, but since the vast majority of Americans still get their info from TV and newspapers, bringing back the Fairness Doctrine (and applying it to Internet hard-news sources) would do more to return our country to a place where political debate is encouraged than anything. But alas, it was killed by an FCC regulator who called the television just another appliance, like a toaster with pictures. He came from, and went back to work in the telecom industry, the same industry he was supposed to be regulating!

Which leads me to my last point, that most of our nations regulatory bodies are staffed by people who have vested interests in the same businesses they are supposed to be regulating. Businesses regulated by the FCC, FDA, EPA, Dept. Of Commerce, etc., are governed by rules set out by their former and future directors & employees! How else could corporations like Monsanto get away with things like "terminator seeds"? 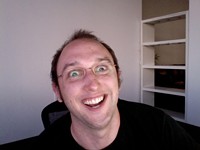 21
Will I be expected to post my birth certificate and tax returns, now? :-P

22
"Israel is NOT a democracy. Who ever thinks this clearly doesn't know shit."
Well DamosA, you don't know shit. But that is nothing new to everyone who has read your posts. If you want to be technical, it's a parliamentary democracy.
Andy from Beaverton on October 28, 2011 at 5:12 PM · Report this