The Uber Discussion Has Raised an Overdue Issue: Equal Access

1
Great coverage on such an important issue, thanks Shelby! Some things I'd like the public to know: (1) 1-3% of inbound dispatch calls from the public require ADA vehicles, (2) 27-31% of account based calls--for example, those dispatched by medical agencies, like the folks who participate in OHP's fully-subsidized medical transportation program--require ADA vehicles, (3) the 20% number is pretty spot on if you average the two needs together, (4) this 20% DOES NOT address response time or other service issues, which should be addressed, (5) most wheelchair vehicles--at least those with Green Cab, Union, and to some degree Broadway and Radio--work on pre-assigned schedules so these vehicles are often scheduled to capacity, making it difficult for them to service on-demand calls from the public or other agencies, (6) the small mom abs pop medical transport companies are already at capacity for wheelchair service, so it's unclear who Uber will be able to contract with, (7) due to recalls and manufacturing delays in the auto industry, the demand for ADA vehicles vastly outnumbers the supply--all speciality vehicle manufacturers are on back order, so the ability to build out fleets for Uber, taxis and medical transport companies is hampered by manufacturer delays. None of these problems have a quick fix, but the task force is looking for quick fixes.
Wynde Dyer on March 25, 2015 at 5:24 PM · Report this 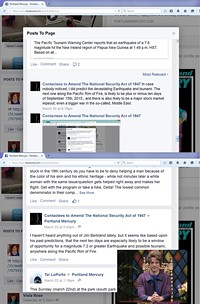 2
We ought to have an Uber police force of citizens who charge for protection and video record the PPD beating the crap out of poor and retarded people.
Churchill Ladd on March 25, 2015 at 6:06 PM · Report this
3
The city pays lip service to the cab companies about enforcement. I have absolutely no confidence in the city to care for its drivers or its citizens. Even the port of Portland is more concerned about collecting gate fees then they are about welcoming people to the city.
Dirty Mike on March 26, 2015 at 7:56 AM · Report this
4
Can't we assume that Uber and Lyft coming in will free up some capacity for the cab companies' handicap-enabled fleet to actually serve the population it is intended for with wait times less than 2 hours? I can count numerous times I have called for a cab and had a wheelchair van show up.
JTR on March 26, 2015 at 9:34 AM · Report this