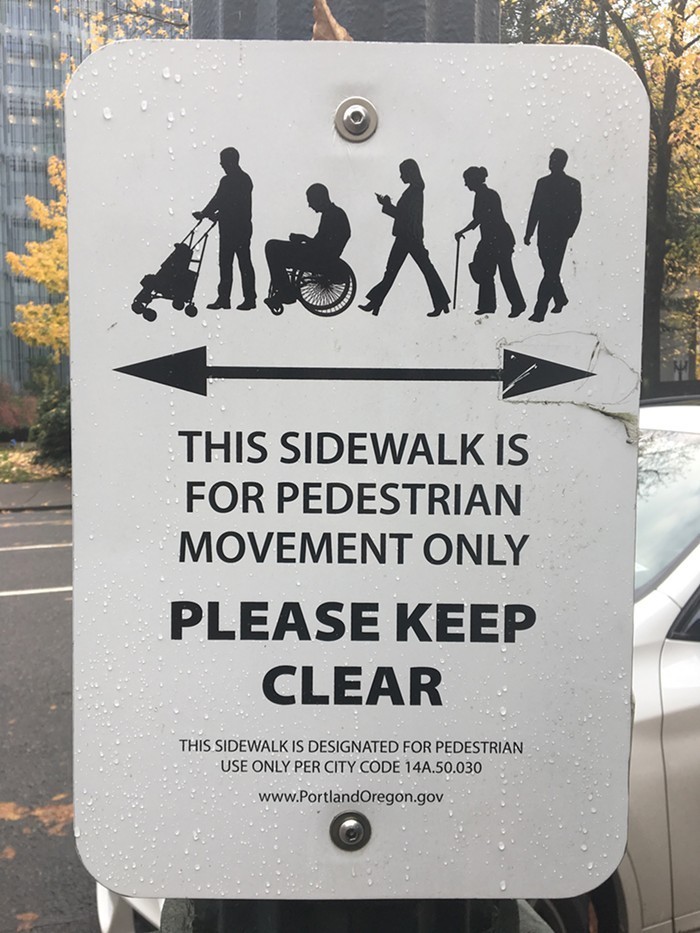 The sign Columbia Sportwear paid for. City of Portland

GOOD MORNING, BLOGTOWN! I know I see angels when I look in your eyes. When I wake Christmas day, you'll be my big surprise. LET'S GO TO PRESS!

Micha Fletcher, the man who survived the MAX stabbing attack last May that left two men dead, confronted Patriot Prayer dickwad Joey Gibson at a Portland protest this weekend. As you can probably imagine, the conversation didn't go all that well, and later a Patriot Prayer co-dickwad was reportedly arrested for striking a normal person.

The Guardian has a story about Portland's Tim Boyle—the CEO of Columbia Sportswear—who is threatening to move the company unless Mayor Ted Wheeler does something about the homeless problem. Note to Tim: Maybe instead of using your money to buy off politicians, you could get off your entitled ass to actually do something yourself about the homeless problem? Portland isn't on this earth for the sole purpose of making you money, dum-dum. To everyone else: STOP BUYING COLUMBIA SPORTSWEAR.

The Blazers met defeat at the hands of the Rockets on Saturday with a score of 124-117. Check out what went wrong with our Arthur Bradford's Blazer recap.

A man with an explosive device strapped to his body is in serious condition after it went off prematurely in a NYC subway. Four people were reportedly injured, the suspect was arrested, and officials are labeling it a terrorist attack—though details are still sketchy.

Tuesday is the day Alabama decides whether they'll vote for a Democrat or an accused child molester, and if the polls are any indication, that's actually kind of a tough question for them! As Trump makes his push to align himself with a possible pedophile, Democrats are throwing a lot of money at their candidate. Meanwhile Sen. Richard Shelby, the state's top Republican, came out against the accused kid diddler. (I'm trying to stay positive about this, and convince myself that the people of Alabama will ultimately listen to their better angels... but after last fall, I don't really believe in better angels anymore.)

Again I'm sorry about the language but if we fucking elect to the US goddamn Senate a pedophile who openly says women shouldn't have the right to vote and slavery should be legal, we fucking goddamn take to the goddamn fucking streets.
— Bess Kalb (@bessbell) December 11, 2017

A group of women who have accused President Trump of sexual harassment and assault held a press conference today to tell their stories.

In a move that will surely send Trump spiraling, ambassador to the UN Nikki Haley says the women who have accused the president of sexual harassment and assault should be heard.

If you haven't already, check out this fascinating NYT feature on what Trump does with his days (spoiler alert: TV, Twitter, Diet Coke, fuming at world, golf).

The GOP tax plan is a goddamn mess, as you already know. But now we're seeing how much of a mess it is, as well as how Trump's rich friends are sneaking in some more benefits while no one's looking.

Now let's look at the WEATHER: Cold sunny days and colder nights ahead!

And finally, check out this Bad Lip Reading of Stranger Things—which plays like an episode of The Wonder Years? Sure! Why not?