Who's Being Cited for Blocking City Sidewalks?

One of the most basic civil rights debates in Portland is over our sidewalks. Thankfully, Rose City sidewalks are no longer governed by the unconstitutional Sit-Lie Ordinance, the local law that banned sitting and/or lying on downtown sidewalks. In spring of 2010, the mayor unveiled an alternative Sidewalk Management Ordinance, which legalizes sitting on the curb but bans blocking an eight-foot-wide "pedestrian zone."

Homeless and civil rights advocates feared that the new sidewalk rules would be used much the same way the old sidewalk rules were: targeting homeless people to shuffle them along.

Last week, I got the data from the first 14 months of the new law. The records of citations and written warnings show that the majority of people targeted by the law are homeless. But also that the percent of non-homeless people warned under the law increased dramatically in 2011 compared to 2010. There's also been a big uptick in the number of written warnings handed out, while the number of citations has stayed the same (and relatively low!). Here's how it breaks down: 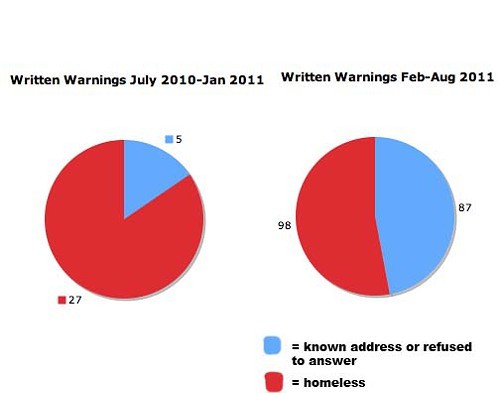 Comments 1
Tags: Politics Blogs
If you enjoy articles like this, please help the Mercury continue our mission of providing up-to-the-minute information, progressive journalism, and fun things to do in Portland by making a small recurring monthly contribution. Never forget: Your help is essential and very much appreciated!
CONTRIBUTE NOW