Opponents of the Measure 80 campaign to legalize marijuana in Oregon put up this billboard on SE 122nd and Division. 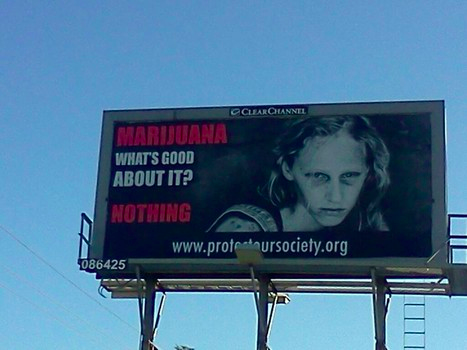 Which pissed off marijuana advocates because... um... that's clearly not a photo of someone who's high on pot. Maybe they've spiked their mountain of meth with an appetizer of hash. Also, there's a lot that's good about pot, if you're someone who's dealing with chronic pain—that's why it's already legal for medical use. People formed a Facebook group to protest the billboard, calling Clear Channel to demand its removal and Clear Channel actually did take it down this week after the advertiser refused to provide a phone number for people upset about the ad to call directly.

So, goodbye Faces of Meth Marijuana!

Comments 13
Tags: Politics Blogs
If you enjoy articles like this, please help the Mercury continue our mission of providing up-to-the-minute information, progressive journalism, and fun things to do in Portland by making a small recurring monthly contribution. Never forget: Your help is essential and very much appreciated!
CONTRIBUTE NOW