Spring Breakers Says a Lot About You 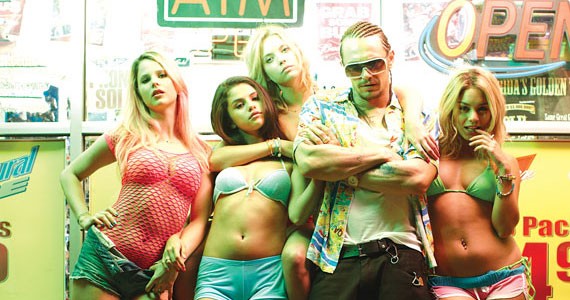 SPRING BREAKERS Well, this picture is about 1,000 percent magical.
Tweet

HERE ARE SOME of the problems you may have with director Harmony Korine's already infamous Spring Breakers: (1) The young college gals depicted in the film invite degradation upon themselves with voracious, proud abandon. (2) Plotwise, there's probably less here than meets the eye. And perhaps most importantly, (3) Spring Breakers may make you come to the sudden, surprising realization you have a big stick up your ass.

Korine is well known for pushing viewers' buttons—whether in his nihilistic screenplay for Kids, or directing the glue-sniffing Gummo and the sociopathic, trash-humping Trash Humpers—but in Spring Breakers, he takes on a topic much closer to home, or at least our imaginations. Spring Breakers is a stark, dreamy, and horrifically hilarious tip o' the hat to Girls Gone Wild—where the girls go one step wilder.

Former Disney princesses Selena Gomez and Vanessa Hudgens (along with Ashley Benson and Rachel Korine) are bored students at a boring unnamed college trapped by their surroundings and future—so of course they're going to rob a chicken restaurant to fund their spring break trip to Florida. Upon arrival, they happily succumb to the riptide of unbridled bacchanalia, where an endless parade of tits are exposed (whether requested or not) and dead-eyed boys mime urinating into the mouths of random girls with endless pours of beer. Coke is snorted off bellies and nipples, and the possibility of gang rape is never very far away.

So is it a surprise when things go wrong? Umm, no. But an unlikely savior, in the form of local rapper/drug dealer Alien (James Franco), provides momentary rescue—that leads the foursome into (if you can imagine it) even more menacing territory.

This is one hell of a polarizing film, and I'll say right now that, as someone who's sick of stale, predictable Hollywood product, I loved Spring Breakers. I loved the lack of judgment it placed upon its characters. I loved the constant twists, turns, and dead ends. I loved the dreamy, looping snippets and dialogue that fuck with the film's timeline. I loved former High School Musical star Hudgens' balls-out performance, as well as Franco, whose ridiculous, menacing drug dealer is one of the funniest, saddest, and (yep) deepest portrayals of such a character I've seen so far. But most of all? I loved the dearth of easy answers.

There's a chance you'll see and despise Spring Breakers—but there's also a very good chance that your reaction will reflect less on the film and more on you.