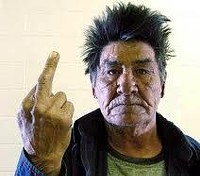 1
RE: Will Kick Balls for Money

Take the money and your pimp, er, bodyguard along.
Tillamook Transplant on November 21, 2012 at 4:36 PM Report this
2
What sort of advice is this?! The girl feels she might have been manipulated and writes to you about it, Savage, and you tell her that yes, she's being used in a sexual situation and that the course of action for her to take is to make sure that it's absolutely clear with the john that it's about sex? And to raise her fee while she's at it? You PIMP! "Hey, baby, you're so fine, you deserve at least $250 for doin' this guy!"
Robert Triptow on November 21, 2012 at 5:30 PM Report this
3
Ugh, agreed on the first being just plain shitty advice. She was manipulated, it was abusive, the money doesn't make it okay and a consensual financial transaction that can be turned around.

On writer two....the advice is fine but a lot of the preaching is utter crap, and DS fails to call the writer on something important. Poly is never about compulsory multiple contacts, it isn't a legitimate comparison for the writer to say "I'm not making her screw other people." But Savage seems to lack a fundamental understanding of why people are (or "do") poly. It isn't because they aren't getting enough with/haven't found "the one." For many there is no "the one." Choices between what is right for you and love for a maybe-incompatible partner are pretty wrenching and can't just be wafted away on a rosy cloud of hollywood bullshit about "the one." A monogamous guy also isn't entitled to rule out the orientation model entirely.....how the hell would you know? (And who's gonna take a bi/transphobe's pronouncement on that seriously? not me.) Your "monogamish" logical twists notwithstanding, which strangely often seem to justify deceiving and cheating on perfectly nice, non abusive partners.....
xauen on November 21, 2012 at 8:12 PM Report this
4
Polyamorous Polymath is a dumbass.

He hooked up with this chick, they were doing the "friends-with-bennies" thing (though she forbade him from fucking anyone else even then, so sounds more like it was an unofficial closed relationship). Then they "fall in love" and now he can't imagine life without her? Hell, he was doing fine his whole life up until he met her, right? NOW he's trapped in a relationship he did not ask for, doesn't really want, and is ultimately DOOMED to failure. Fucking dummy.

If PP has any wits about himself remaining, he'll DTMFA and go find someone he CAN be truly happy with (and same for her). He fucked up, but it's better he get this out of the way now. Otherwise, he'll just end up resenting her later, he WILL cheat on her (part of that will be her fault, too), and things will get very messy after that.