Darcelle: That’s No Lady Review: A Messy Look at One Man’s Fantastic Life 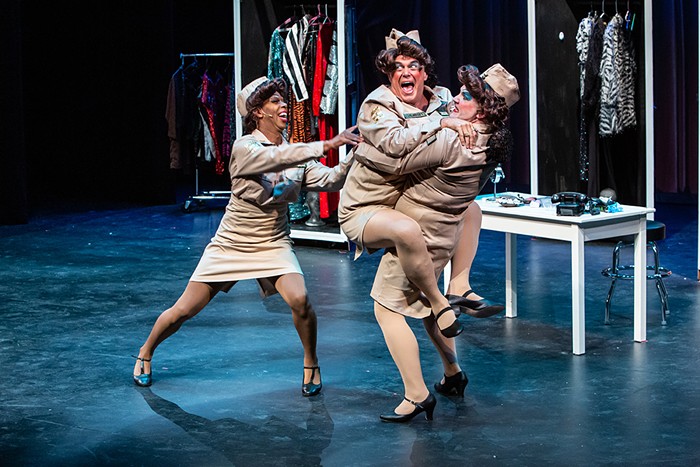 This was an utterly appropriate scene for a musical about Darcelle XV—the stage name and drag persona of Walter Cole—who, at 88, remains the world’s oldest performing drag queen.

That’s No Lady takes a campy approach to Cole’s fascinating career. Beginning in 1967, when Cole (Kevin Loomis), the new owner of Demas Tavern, meets Tina Sandel (Jeff George), who performs in drag at the nearby Magic Gardens. Despite Cole being “39 years old with two teenage daughters,” he allows Tina to slip a dress over his head and put him on stage, where he lip-syncs Barbra Streisand’s “People.” Loomis plays this all with wonder, if not autonomy. When Roc Neuhardt (James Sharinghousen) enters the picture—first as a hot guy Cole is interested in and later as the dynamic Roxy—the three begin performing in drag every weekend at Demas.

Lip-sync performance in a theater setting throws me a little; I almost wish that Darcelle: That’s No Lady were running in a smaller venue. Theater-going audiences are trained to be quiet—in a bar, a lip-sync would be accompanied by the energy of a shouting, hooting audience, so lip-syncing in a large theater hall makes the performance feel small. The linchpin ends up being the quality of the song’s recording: Tina’s lip-sync to a tinny recording of Ike & Tina Turner’s “Proud Mary” felt inappropriately lackluster, despite George absolutely killing it in a yellow tassel dress. But Walter’s shy Streisand carried the recording’s warmth and filled the theater.

That’s No Lady carries us through the renaming of Demas to the Darcelle XV Showroom in the ’80s but gets a little stuck on the running gag of Cole’s age and lack of coordination. George and Sharinghousen frequently run the risk of stealing the show. Though the story starts out silly, there’s some heavy stuff about childhood sex abuse in the second act. The mood comes up again, but the musical ultimately lands on a somber note, pondering Cole’s age and the loved ones he’s outlived. This fits with the messy pieces of a real man’s complicated and incredible life, but maybe I just expected more sparkles.