Timbers Lose To Seattle On Penalty Kicks But Soccer Wins 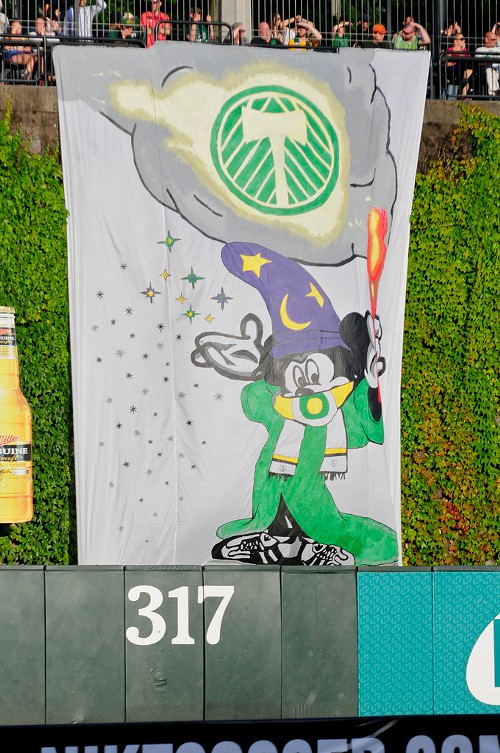 With no World Cup match today as South Africa took a break before the quarterfinals, it was easy to say that the match between the Portland Timbers and the Seattle Sounders was, more or less, the center of the soccer universe. And while the Timbers did lose to the Sounders 4-3 on penalty kicks after playing to a 1-1 draw in the third round of the U.S. Open Cup, I don’t think there was any fan—Portland or Seattle—among the season-high sellout of 15,422 who could say they didn’t witness an excellent, excellent game.

A larger recap with more great photos after the jump!

The Timbers went toe-to-toe against their age old rival and after 90 minutes of regulation and an additional 30 minutes of extra time, both teams were still tied at 1-1.

In many ways, the over two hours of high drama passed by like a blur starting with the Sounders' ridiculously bright neon yellow kits.

Then there was Eugene native Nate Jacqua putting the Sounders up early in the 13th minute with a surprising goal. I could tell you that Timbers striker Bright Dike was hit, fouled, and chopped throughout but continued his excellent play with a goal in the 38th minute that tied the game up setting off wild celebrations in the overflowing Timbers Army sections. 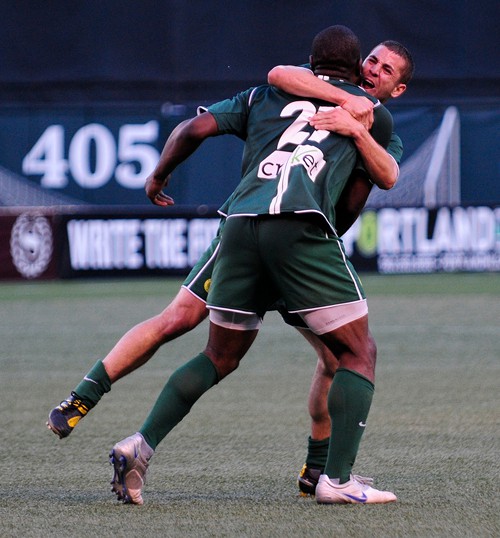 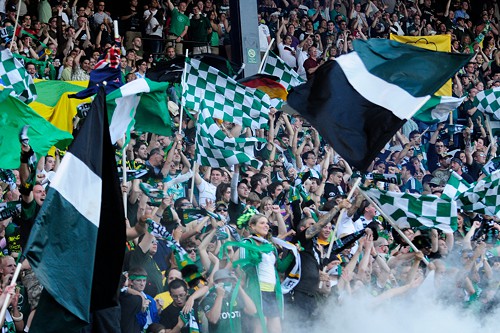 In my wiped out haze of memory I could also tell you that James Marcelin and Tony McManus did well in midfield allowing Alex Nimo, Takayuki Suzuki and Ryan Pore to run wild in slashing attacking runs. I would be remiss if I did not mention that the Timbers defensive backline was a wall and that keeper Steve Cronin punched clear more shots and crosses than a boxing match. There was tactically sharp cycling of midfielders disguising themselves as forwards between Pore, Suzuki, and late substitution Rodrigo Lopez. I remember celebrating in zonked joy Seattle’s Taylor Graham receiving his second yellow in extra time leaving the visitors with ten men. There were two fouls called against the Sounders agonizingly just beyond the magical area of penalty kicks. Lopez missed an open net 25-yard chip shot high over the bar. There was cheering. There was yelling. There was new tifo. There was joy. There was pain. There was exhaustion by everyone: players, fans, vendors, staff, press, ball kids, feral cats under the stands . . . It was that kind of epic.

As the teams lined up for the dreaded and seeming randomness of penalty kicks, the stalwart Timbers goalie Cronin gave Seattle Sounders keeper, University of Portland alum, and ex-U.S. National Team veteran Kasey Keller a big hearty hug. It was the kind of moment that acknowledges a deep respect for what was happening on the field tonight; namely, a damn fine game.

As the five rounds of penalties played out, Timbers leading goal scorer Ryan Pore led things off with a shot that I’m betting he wished he had back as the crafty Keller made his save almost look easy. This miss in the first round put the Timbers in a hole that they were just not quite able to dig out of. After each team converted their second and third attempts, the Timbers’ fourth shooter, defender Ross Smith—who had played a very strong game even with his unique speedo-esque shorts—fired left into the waiting arms of Keller leaving Seattle up 3-2. A glimmer of hope was extended in the bottom of this fourth round when Seattle defender Patrick Ianni slammed his off the cross bar. Portland’s Rodrigo Lopez gamely made his last shot, but the Sounders’ Zach Scott finished it off with a unsaveable laser past Cronin in the upper right corner and a final 4-3 tally. 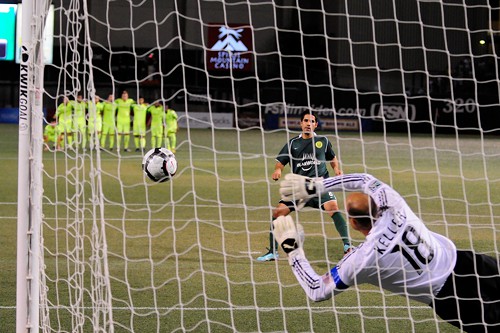 Make no mistake: this loss hurts. Portland fans—myself among them—wanted to beat Seattle badly. Timbers players wanted to beat Seattle badly. However, if there was a bright spot to be taken from this evening it is this: Portland is playing some very very good soccer and hitting their stride at midseason. They will need to rest up very quickly—both emotionally and physically—as they run right back out there Saturday night against the Vancouver Whitecaps. If they continue to play like they did tonight though, they’re capable of accomplishing great things.

Alex McDougall's full set of photos can be seen here.

Comments 7
Tags: Timbers Blogs
If you enjoy articles like this, please help the Mercury continue our mission of providing up-to-the-minute information, progressive journalism, and fun things to do in Portland by making a small recurring monthly contribution. Never forget: Your help is essential and very much appreciated!
CONTRIBUTE NOW