With the release of The Town, Jon Hamm went through the media wringer this week. Here he is on The Daily Show and here he is with Terry Gross. 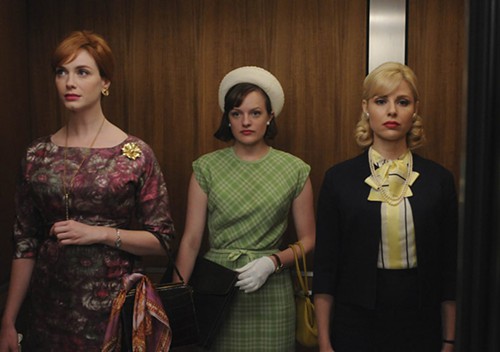 After an episode about Don trying to define himself we get one about women defining men. The women dictated all the scenes in this episode. Joan, Peggy, Faye, Sally, Ida. Even Megan got to help out a little.

"Men never know what's going on," says Vivian Winters, the woman who finds Sally hiding between train cars. (For some reason there's a giant 666 behind her in the shot.) The statement was true for every man in the episode.

Peggy's clash with her suitor, Abe, brought out the thing I love about her character, her intense pragmatism. Plagued by Abe's idealism, she tries integrity on, but it's impossible in her line of work. (Words to avoid on future dates Peggy, "One more drink and it'll come out.") We know that for all her power, she's marginalized. Eventually, someone will come along and legitimately challenge her job. But for now she has to contend with Abe. She obviously likes him, but she's not ready to fling herself into the counter culture. Peggy will always make her own way, and she really believes that advertising is egalitarian.

I wasn't expecting them to throw Joan into someone's arms so soon, but the writers gave the people what they wanted and had Joan and Roger do it in an alley under someone's stoop. I bought it after the harrowing day at the office and the mugging. I'm wondering if it will lead anywhere, wouldn't be surprised if it didn't. But there's a good chance she'll be getting pregnant.

Faye is busy trying to be Don's girlfriend, and Don clearly feels connected to her because he keeps asking her to do things for him. He must have hopes of marrying her, but she might not be his kind of woman. At first I thought her speech betrayed some insecurity about her career choices, but I think the experience with Sally just kind of rattled her. Shaky future for them.

Poor Sally, I wonder what kind of blow up she's headed for. They ask a lot from young actress Kiernana Shipka and sometimes her tantrums are a little forced, but its uncanny how well she imitates January Jones' mannerisms and cadence. It freaks me out. I did buy her very public breakdown.

And finally a moment of silence for my favorite new character this season, Ida Blankenship. Ida clearly helped make Bert Cooper the man he isn't. His eulogy was touching, as was the brief crossword scene between the two of them. Her death was a cold joke, but fitting for the episode's theme. Executive secretary and astronaut, I wonder if Bert Cooper might follow her soon. Her last words, I'm pretty sure, were a crack at Sally's weight.

After all that it was Joyce the lesbian who delivered the theme. Not sure if I understood her soup bowl analogy but then, I'm a man, I don't understand anything. I think she meant that the men make society run but the women make sure the men can do it?

Roger's memoir sounds a lot like From Those Wonderful Folks Who Gave You Pearl Harbor, one of Mad Men's core references.

Aside from Don's journey of self-discovery this season seems to be lacking a grand conflict or plot line. It's been very internal and very episodic, which I appreciate. Where do you see all this heading? There's a lot on the plate right now, it seems like new plot points keep coming up while nothing resolves. It makes me hope our last four episodes will be exciting.

Comments 4
Tags: TV Blogs
If you enjoy articles like this, please help the Mercury continue our mission of providing up-to-the-minute information, progressive journalism, and fun things to do in Portland by making a small recurring monthly contribution. Never forget: Your help is essential and very much appreciated!
CONTRIBUTE NOW