Looks like the General Lee has finally encountered a hurdle it can't jump. The New York Post reports that TV Land—the network known for showing classic television shows—will no longer be airing episodes of the '80s hillbilly show The Dukes of Hazzard. From the NYP:

The network declined to comment on why the episodes were removed, but the South-set show has come under fire recently for its use of the Confederate flag, which is emblazoned on the roof of the Duke Boys’ signature 1969 orange Dodge Charger.

As I reported last week, Warner Bros. pulled the plug on their toy car replicas of the General Lee, along with other businesses who are banning the stars and bars from their merchandise, such as Walmart and eBay.

However, for those desperate racists who will panic and die without a place to buy Confederate-emblazoned Duke boy products, check out Cooter's Place—your online source for all things Hazzard-related, which includes seven full pages (!!) of Confederate-related ephemera... including this Confederate flag bikini, this Confederate flag with a big fish on it, and for the racist who has everything? This Confederate flag-themed bedroom set. Sleep well, hillbillies! Yeeee-Hawwwwzzzzzzzzzz........ 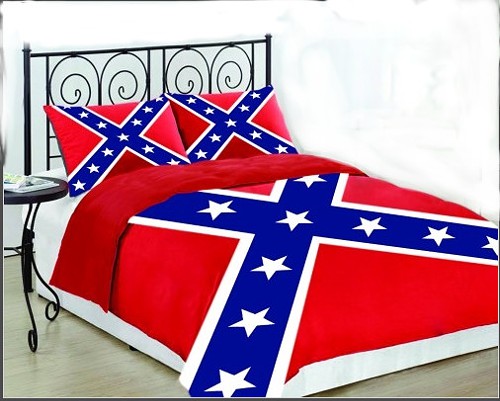