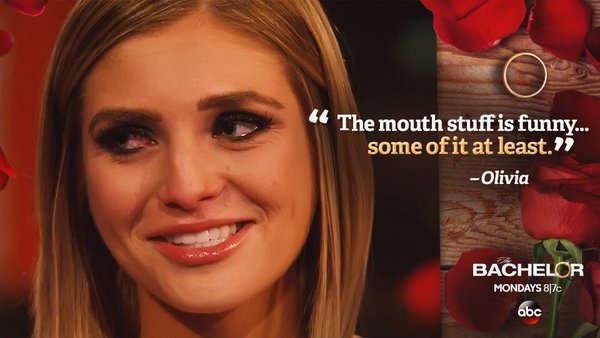 It’s that time of year when the sun and rain do battle unpredictably, and no matter what the weather app on your phone says (no matter how much you paid for it), you’d better just go ahead and bring a jacket. Few things are as fickle as spring weather, but I think my love/hate relationship with The Bachelor has helped me understand the mercurial nature of the weather gods. Basically, we’ve both lost our minds, driven mad by long winter nights filled with rose ceremonies and an indifferent moon that won’t stop with that smug, smug smile.

This week’s episode of The Bachelor is the “Women Tell All” where all the women who were sent home get to come back and give Ben, the aforementioned Bachelor, a piece of their minds.

Turns out this isn’t a very interesting episode. Certainly nothing much happened worth recapping. There were no shocking revelations, and the arguments were resolved quickly and without much drama.

The biggest moments of the night were owned by a chicken (remember the Chicken Lady who got sent home early on? Well, she brought her chicken, Sheila), and an argument over race between Jubilee, Amber, and Jami that is so half-baked that it’s still batter.

Crazy Lace talked about how she wasn't herself on the show because she didn't know how to act in that kind of situation, then announced that she's going to be on The Bachelor In Paradise later this year. Then she was accosted by an even crazier dude who got her face tattooed on his ribs.

Olivia got taken to task for her behaviour during her time on the show. All the women came out of the woodwork to talk shit and it was mildly satisfying. Olivia broke into tears talking about the social media backlash after the show started to air. You almost start to feel bad for her until you remember she’s a sociopath, and that’s why everyone hates her in the first place. Is it fair to hate sociopaths? I hope so.

Calling people out on their pseudo-intellectualism is my JAM. Courtesy of @bachelorABC

Caila gets some screen time to talk about the heartbreak of getting sent home last week. She’s a sweet girl—a little weird—but sweet. The rumors on the web say she’s going to be the Bachelorette next season. I guess. I mean, I’m hoping the Earth is ash covered husk floating through space by then.

Ben comes out to be confronted by all his heartbroken exes, but Ben is so vanilla that he pretty much left things on a good note with all of them. By the way, I hate using the word “vanilla,” but I do it because I realize it’s a common adjective to describe something as boring. But here’s the thing: Vanilla is not boring, it’s a delicious as fuck flavor. You know what’s kind of boring? Chocolate. Chocolate is in/on EVERYTHING. It’s motherfucking ubiquitous. That makes it’s mundane, common, boring. Vanilla is great. Fuck you.

The best part of this episode is the "Blooper Reel." No matter what you think about The Bachelor, you have to love a good blooper. Here are a few from last night:

Next Episode: It's the finale! Will Ben choose Lauren or JoJo? Answer: Lauren, he’s going to choose Lauren. Then I will be freed from this contract I signed in blood.

Tags: TV
If you enjoy articles like this, please help the Mercury continue our mission of providing up-to-the-minute information, progressive journalism, and fun things to do in Portland by making a small recurring monthly contribution. Never forget: Your help is essential and very much appreciated!
CONTRIBUTE NOW